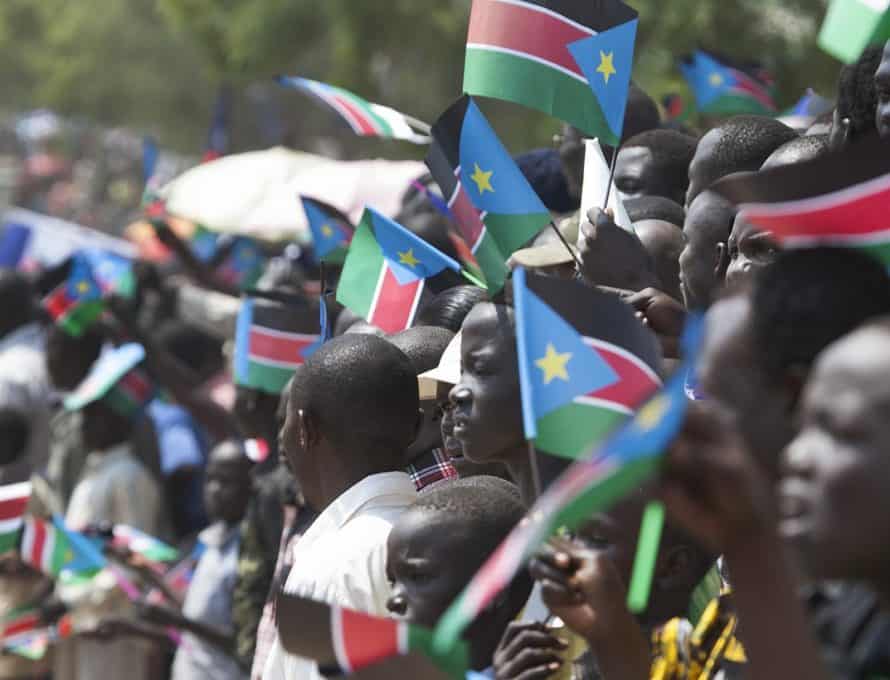 JUBA, South Sudan – After decades of war, the people of South Sudan celebrated independence on July 9, 2011. The war was primarily a Muslim Arab versus Christian African conflict. Eighteen months later the country was plunged into violent civil war. A peace accord was signed in August this year. IMB Photo by Charles Braddix.

JUBA, South Sudan (BP) – While United Nations Secretary-General Ban Ki-moon alluded to “a new window of opportunity” for peace in war-torn and famine-stricken South Sudan, one missionary there said “the window is small” for sharing the Gospel in the world’s youngest nation.

Ban was speaking Sept. 29 at a high-level meeting of the U.N. as part of its General Assembly debates, which included leaders from around the world. Ban said it is “a pivotal moment” for the country of South Sudan.

Robert Lane, who serves with the International Mission Board in South Sudan, warned that “the window is small. We don’t know how long South Sudan will be open. Now the Gospel can be proclaimed, but there are risks.” He added, though, “The Gospel is worth them all and a thousand more.”

Having gained independence from Republic of the Sudan in July 2011, South Sudan was thrust into a violent civil war 18 months later when its president Salva Kiir dismissed his deputy Riek Machar, accusing him of instigating a rebellion. The ouster sparked hostilities along ethnic lines, primarily between the Dinka and Nuer tribes, resulting in one of the world’s worst humanitarian crises in recent times.

Both sides have been accused of committing atrocities among the general population, and the conflict has created a mass movement of peoples being displaced within South Sudan or becoming refugees in neighboring countries. The war and migrations have contributed to severe famine conditions in some parts of the country.

In August this year a peace accord was signed between the two warring factions. “When the parties signed the agreement …, they created a new window of opportunity,” Ban said. “I urge the signatories to honor their solemn commitment and implement the agreement without delay. Reverting to war yet again cannot be an option.”

Tim Cearley, IMB strategy leader for sub-Saharan Africa, said, “Pray for the Prince of Peace to be made known in the midst of this fledgling country, wracked by tribal fighting, political warring, cyclical drought, decades of civil war and unrest. Pray for God’s peace to come to South Sudan, through believers in the camps, through warriors turning to Christ, and through the miraculous transformation of individual hearts that only He can bring.”

Within the country Christians are, indeed, praying for a true and lasting peace, noted pastor Ellie Sworo.

“Christians stood in prayer and fasting for peace in the country,” Sworo, who leads Nuru Baptist Church in Juba, said. “Glory to God that the peace accord is already signed. Christians are now praying for the implementation process and the interim period, that it would be a very peaceful one.”

Sworo said many Baptists have been affected by the conflict, with most taking refuge at U.N. camps either within the country or outside its borders.

“When the crisis started, the church –the Baptist Convention of South Sudan – supported by providing shelter to fleeing citizens, feeding them for several days before they transited to refugee camps,” he said. “The church would still love to support affected citizens with any available funding.”

Sworo said the Baptist Convention of Sudan is currently providing “spiritual support” to South Sudanese refugees in Uganda. “There are five local missionaries working among the refugees to spread the Gospel of Christ and help in true reconciliation among tribes by teaching about forgiveness, reconciliation, etc.,” he said. “This is the major task of the church – to bring lasting peace to the nations through teaching and reaching out the Gospel of Jesus Christ.”

In spite of long-term war and displacement, God is at work, Cearley said.

“South Sudan has over half its population in some kind of camp, whether internally displaced peoples, or outside the country along the border,” he said. “Some of these people have been in camps for over 15 years. Now we have movement to Christ in several places in at least two people groups.”

Cearley said, “We have young IMB families living in South Sudan. Pray for them. Pray for the Light, shining through them in this darkness.”

Both Sworo and Cearley see opportunities for witness and ministry throughout the region.

“Our vision as the Baptist Convention of South Sudan is to reach 20 million unreached people in South Sudan, northern Uganda and Congo,” Sworo said. “The only way to reach our target is by getting more local missionaries trained and equipped for the mission.”

Lane, an IMB missionary serving in South Sudan, said, “When you pray for South Sudan, ask if you should be there, and wait for the answer. Then keep praying.”