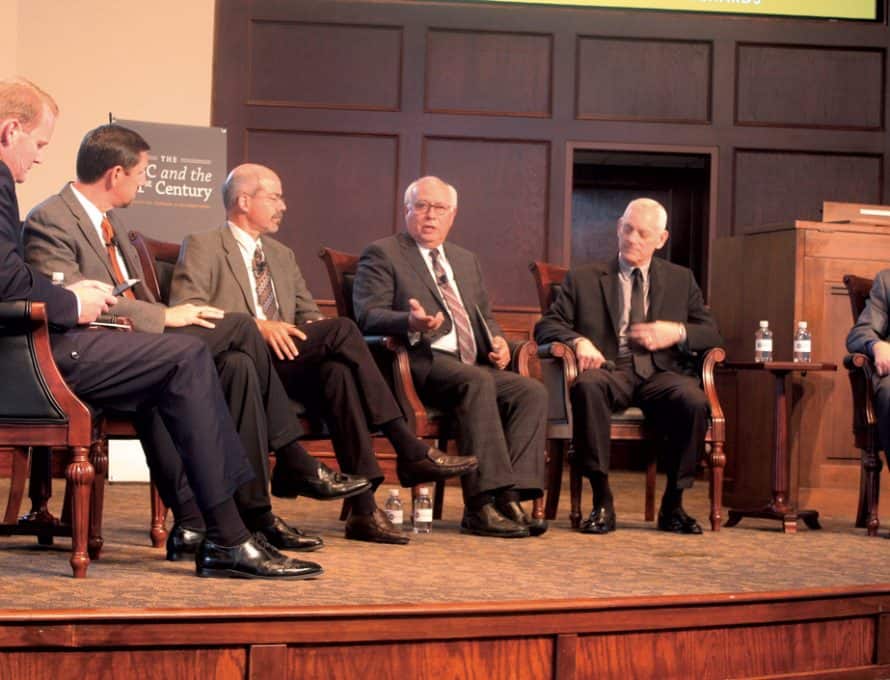 KANSAS CITY – Leaders from five midwest and southern conventions laid out the history – and their vision for the future – of state conventions in Southern Baptist Life at SBC and the 21st Century symposium at Midwestern Seminary Sept. 29.

Acknowledging the question is a complex one, moderator and Midwestern’s president, Jason Allen, asked Yeats to define the role of the state convention in a system where almost all churches are affiliated on three levels: the association, state convention, and Southern Baptist Convention (SBC).

In addition to focusing ministry on a certain state or – to use Acts 1:8 speak – “Judea,” Yeats said the state level is where the accounting and cooperative giving takes place. Churches give a certain percentage of their budgets to the Cooperative Program, and then the messengers to the state convention choose the percentage that stays in-state for ministry and what is sent on to the SBC for dispersal there.

A question to the panel from the crowd brought up the idea of 50-50, where half of the CP receipts are used for in-state ministry, and half are sent on. Currently, most state conventions pass on slightly less than 50 percent to the SBC, but there has been a push in recent years to trim budgets and personnel to send more on to the SBC, and thus more to the International and North American Mission Boards.

“We have a plan for trying to get to 50-50 after shared items,” Yeats said, referring to two of five historical categories of spending authorized by the SBC in 1954: subsidizing church’s Guidestone retirement plans and spending on the state newspaper.

Sixteen percent is then obligated to Hannibal-LaGrange and Southwest Baptist University, and the Missouri Baptist Children’s Home. Any giving above and beyond the state budget goes directly to the SBC and inches toward the goal of 50-50.

“These have been hard times across the country, but our churches have responded with more CP dollars and last year increased the giving to the SBC by two more percentage points,” Yeats said.

Yeats outlined other ministries the state conventions are uniquely positioned to handle, including partnerships, church planting, and addressing religious liberty issues at the state capitol.

Each of the panelists were asked where their state convention would be in five to 10 years.

“I would pray we’re much more diverse,” Yeats said. “It’s something we need to think about and be aware of in our hiring practices, and that we need to be cultivating future leaders from all backgrounds.”