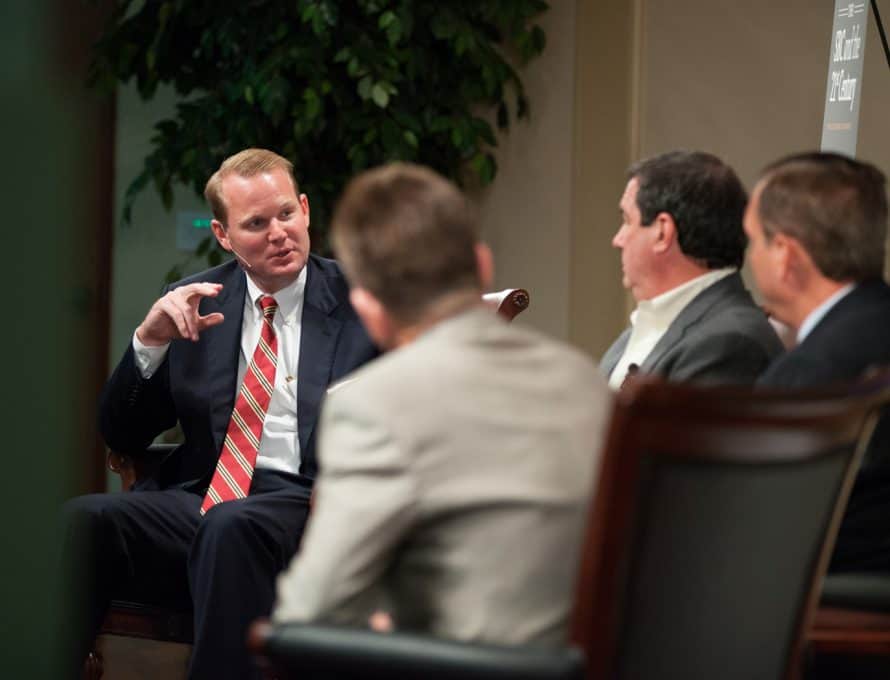 KANSAS CITY -— Leaders from across the Southern Baptist Convention gathered at Midwestern Seminary’s Kansas City campus on Sept. 28-29 to address issues pertaining to the denomination’s future during a symposium entitled, The SBC & the 21st Century: Reflection, Renewal, and Recommitment.

Allen, who also led a main session, noted that such an event had not been held in SBC life in recent years and that the purpose of the gathering was to engage issues vital to Southern Baptist identity, heritage, and future.

Allen announced a partnership with B&H Academic on a book project comprised mostly of the presentations delivered at the symposium. David Platt, Danny Akin, Walter Strickland, Collin Hansen, and Justin Taylor will also contribute chapters to the book, which will hold the same title as the symposium and will be available to the general public at the SBC’s annual meeting in June 2016.

Frank Page – “The Cooperative Program and the Future of Collaborative Ministry”

Frank Page, the SBC Executive Committee’s Chief Executive Officer, opened the symposium with insight into the 90-year history of the Cooperative Program and the impact of the SBC’s collaborative ministry over the years. Wondering if this asset is taken for granted within the SBC’s membership, he particularly noted one outsider’s contemplation about the CP saying, “Do you Baptists understand what you really have with the Cooperative Program?”

As an asset that no other denomination possesses, Page said the CP accomplishes ministry and missions in a way that singular churches could not.

“When we recognize who we are, no matter how big or small, every church can be a part of doing something bigger than themselves,” Page said. “It is extremely important that they know they have a part in sending missionaries…supporting theological education…and planting churches all over this continent.”

Page foresees a bright future for collaborative ministry within the SBC. Goals he desires to see accomplished through the CP in the days ahead include 7,000 missionaries reaching the world for Christ; 15,000 new church plants across the continent; decreasing tuition and fees at all six SBC seminaries; reaching masses of lost college students through state agencies, and much more.

Paige Patterson – “Counsel to the New Generation of Southern Baptists”

A list of 12 witty analogies providing perspective for the future highlighted Southwestern Seminary President Paige Patterson’s counsel to the next generation of Southern Baptist leaders.

Ranging from “Culture is your friend in the same way a brown bear is your buddy,” to “A Christian who has not seriously suffered is like a beautiful Rolls Royce without a motor,” Patterson imparted wisdom to the younger generation from more than five decades of ministry experience.

In his ninth point, Patterson stated, “Arrogance is as charming to God’s people, and as appealing to God, as an angry bull is to a wounded cowboy in a rodeo arena.”

Noting that while arrogance knows no age restriction, Patterson acknowledged that it typically rears its head in ministry amongst younger believers. The reasons, he assessed, included insufficient experience, too little knowledge, and inadequate time spent walking with God.

Albert Mohler – “Southern Baptists and the Quest for Theological Identity: Unavoidable Questions for the 21st Century”

Trying to discover one’s or an entity’s identity in present times is difficult due to ever-increasing pluralism, said Mohler, who is president of Southern Seminary. However, he noted that it is a mandatory task that Southern Baptists must undertake, especially on the theological front.

With modernity and liberal theology influencing the identities of Christian denominations throughout the 20th century, Mohler noted that Southern Baptists remained “at ease in Zion” or comfortable within their denominational bubble when it came to their identity. However, this would change in the 1970s, and has been the case ever since.

“At this point (1970s), the question of identity has become unavoidable,” Mohler said. “There is no way that one can speak of the future of the Southern Baptist Convention…without the identity question being front and center.”

The final question Mohler addressed originated from Jesus’ question to his disciples in Luke 18, “When the Son of Man comes, will he find faith on earth?”

“Understanding that Jesus asked that question of his disciples means that surely he must be asking it of us,” Mohler concluded. “Our responsibility, though in one sense for the church universal through the ages, is a responsibility for our denomination and our churches at this time…May the Lord find us faithful.”

Thom Rainer – “By the Numbers: What SBC Demographics Tell Us about Our Past, Present, and Future”

In the symposium’s final presentation, Rainer, the president & CEO of LifeWay Christian Resources, brought a macro-view of SBC demographics “by the numbers” since its inception.

“So what are the numbers telling us?” Rainer asked. “It appears…we have lost our focus. We have become complacent and comfortable. Perhaps we can turn these bad trends to good. And by the grace of God, those numbers will tell us that we are truly rebuilding the house of God.”

David Dockery – “Who are Southern Baptists? Toward a Trans-generational Identity”

Acknowledging that Southern Baptist identity has changed significantly from 1845 to 2015, Dockery suggested a major shift toward recovery, or re-envisioning took place around 2005.

Among these were ideals such as Southern Baptists’ commitment to the convention’s model of ministry; the SBC being characterized by controversy and conflict, as well as being cooperative, confessional, compassionate, and a Great Commission people; and as a group that understands its culture.

Looking to the future, Dockery suggested that Southern Baptists must become interconnected to other denominations and networks committed to the Great Commandment and Great Commission; become intercultural and interracial as opposed to insular; become intergenerational, finding its ultimate identity in Christ, not in particular generations.

“As we envision, or re-envision, a blessed future for Southern Baptists, we can no longer be naïve to the multifaceted changes and multi-level challenges around us,” Dockery concluded. “We pray that shared collaborative efforts of churches and SBC entities will bring forth fruit, will strengthen partnerships, alliances, and networks for the extension of God’s kingdom, the advancement of the gospel…for the eternal glory and grandeur of our great God.”

In addressing training for the next generation of SBC ministry leaders, Allen expressed that theological education, both presently and into the future, seems to be unpredictable at best. Allen did offer an alternative, however.

“My argument is straightforward—we cannot predict the future of theological education, but we must choose to determine it.”

Historically, Allen said, the relationship between SBC churches and their seminaries was tenuous at best because of a generalized suspicion of higher education as well as the theological controversies and liberalism that had spread throughout the faculties of these institutions.

However, Allen noted significant change has occurred in the decades following the 1979 Conservative Resurgence, culminating in the Baptist Faith & Message 2000. All of this has led to the present, where he stated that the denomination is “enjoying a golden era in theological education.”

To view all main sessions of the Symposium, visit http://www.mbts.edu/news-resources/.