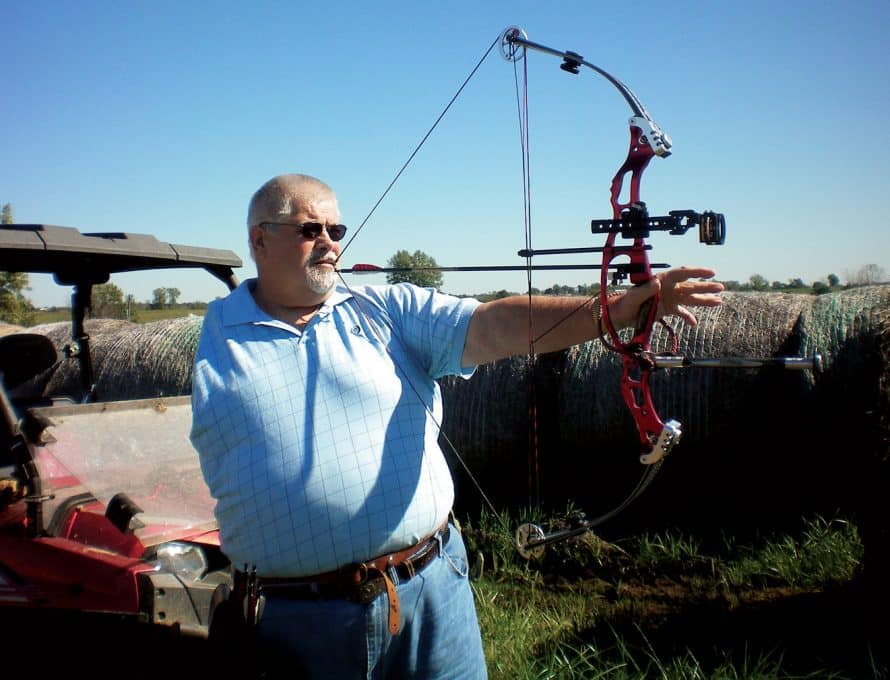 GREEN CITY – After suffering an accident that led to the amputation of his right arm, Carroll Walker successfully competed in regional, national and even international archery tournament, and he now uses his unique gift as a means to share the gospel.

GREEN CITY – Carroll Walker hunted and fished like many Missouri men. He took up archery in order to extend the hunting season and spend more time outdoors. Then a tragic farming accident handed him a disability that threatened his way of life – if he didn’t find a way to overcome it. Walker, 65, has become a competitive archer and a good one at that. In fact he rarely misses his target.  All this with only one arm.

In 1978 Walker was operating a grain auger on his north Missouri farm.  His dad was on a tractor, moving the auger and it got entangled in some overhead power lines. 7,200 volts of electricity surged through Walker’s body, causing his right arm muscle to “explode” and injuring him in several other ways.

“I remember a sensation of getting shocked,” he said. “Then I felt a great pain.” After that he remembers little of the accident except being put on a plane to be flown to Iowa City, Iowa, for treatment.

“I heard him scream and I knew what had happened,” said his wife, Marilyn.  Walker’s dad said, “I think he’s gone.”

But he wasn’t gone. He spent 69 days in the hospital and his arm was amputated at the shoulder. After that he returned to the farm but had to scale back. He went back to college and got a teaching degree. Now he farms and teaches special education students at Novinger School District.

But along the way, he picked up his bow and arrows and began practicing archery with the help of an adaptive device called a “mouth tab.” He inserts an arrow in his compound bow, grasps the tab with his teeth and pulls back with great strength in his left arm. What is amazing is that he rarely misses his target.

In fact he has competed in state and national archery tournaments since 1980 – winning over 25 times. In 1992 he traveled to Barcelona, Spain, to compete in the ParaOlympics.

This summer he shot a demonstration for the kids at a camp at Grand Oaks Baptist Assembly, Chillicothe. His pastor, Rodney Dorr of First Baptist Church, Green City, arranged for him to shoot in the camp chapel.

Dorr preached on the concept of sin and “missing the mark” (Greek word “hamartia.”). Dorr had arranged with Walker to intentionally miss the mark a few times. Kids were unimpressed until one of the Green City boys cried out, “He’s missing it on purpose!”

At that point, Walker shot the bullseye repeatedly on the mark.

Dorr said he used Walker in the demo because of his positive attitude and excellent character. “He is an encourager. He teaches our older adult class … is a deacon He has overcome disabilities.”

Walker is a humble man who says he just wants to give God glory for what he has been able to accomplish in archery competitions since his accident.

“I’ve done so many bad things and God would not want me like that. Jesus died for us. I still have trouble (understanding) that. He even died for ISIS terrorists.  Hard to comprehend.”

He believes God gave him a second chance at life and though he has a disability he says, “…you can’t just sit and do nothing. You’ve got to keep going.”

In recent years he has shared this message with AWANA clubs, sportsman’s wild game suppers, church camps and other church groups. He often sets up a target on a hay bale and demonstrates picking off Lifesaver candy pieces one by one to the delight of his crowds.

Asked how he is so good, his eyes twinkle and he gives a one-word reply: “Practice.”

He elaborated. “Where there is a will, there is a way. It is so easy to give up, to stay inside. It may take me a little longer to do some things, but I keep on trying.

His life message: “Don’t put off becoming a Christian.”