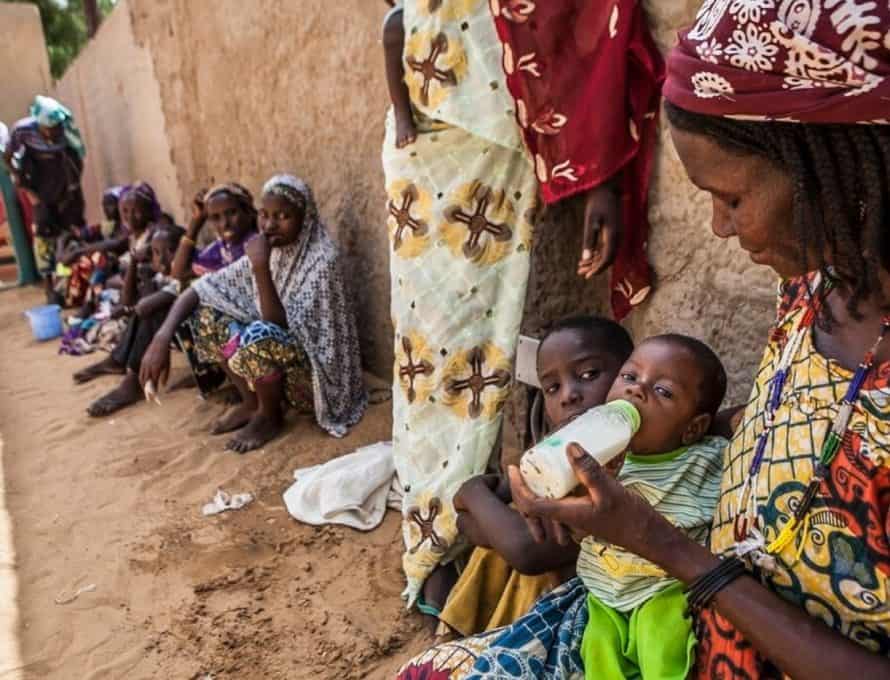 Temperatures in this part of West Africa can soar well above 100 F in the hot season, and babies can quickly become dehydrated. Mothers bring their babies to the clinic for rehydrating and nourishing baby formula purchased by donations to Global Hunger Relief. Photo by Evelyn Adamson

WEST AFRICA (BP) – Whipping desert winds fill the air with dust, which settles on the clinic’s metal gate, muting its deep maroon color. A clinic worker opens the gate, and two grandparents step into the clinic with their 2-month-old grandson. Untying the wrap that holds the baby on her back, the grandmother slides him around in front and cradles him as she sits down. The baby’s grandfather pulls up a chair and sits next to them.

The emaciated baby lies motionless on his grandmother’s lap. The simple move from her back seems to have drained his energy. He closes his eyes. The only movement is the soft rise and fall of his chest he breathes in the dry, hot afternoon air.

A clinic worker then sits next to the woman and assesses her grandson’s nutritional condition. A small dent on the top of his head indicates dehydration. The clinic worker gives the grandmother a bottle of formula to feed her grandson, and listens as the woman tells their story.

The baby’s mother died four days earlier, and he has not eaten since. His grandparents tried feeding him cow’s milk and rice water – two of the only food options for babies in this part of Africa – but he was losing weight.

The grandparents took him to a clinic in a nearby village, hoping to find help. The workers there told them about this clinic, where families in need could receive baby formula provided by Global Hunger Relief (GHR), the Southern Baptist campaign to fight the worldwide hunger crisis.

Most babies brought to the clinic are orphans, or their mothers can no longer produce enough milk to feed them, because of their own malnutrition. After an assessment of the baby’s nutritional condition and needs, families are provided alternative resources to feed their babies. Families return each week for a new supply of formula.

A simple formula distribution project like this saves lives in sub-Saharan Africa, where an estimated one in four persons is undernourished. Each week, the clinic distributes formula for 250 to 300 babies. The babies who get help in time quickly put on weight and soon are healthy and growing.

But distributing infant formula is only one way GHR combats hunger. In 2014, more than 36,000 people around the world received food as part of community development efforts and more than 200,000 as part of disaster response. In addition, more than 433,00 water needs were met.

GHR is one of the most effective channels for donating toward the global hunger crisis. While most humanitarian organizations may keep from 30 percent to 70 percent for administrative overhead, GHR is able to devote 100 percent of resources directly to meeting hunger needs because Southern Baptist churches cover most administrative costs through their Cooperative Program giving.

In every case, the goal of GHR hunger projects is communities and lives transformed for today, tomorrow, and forever.

Globalhungerrelief.com offers resources to mobilize congregations and other small groups who want to help hungry souls and offer hope in the midst of suffering.