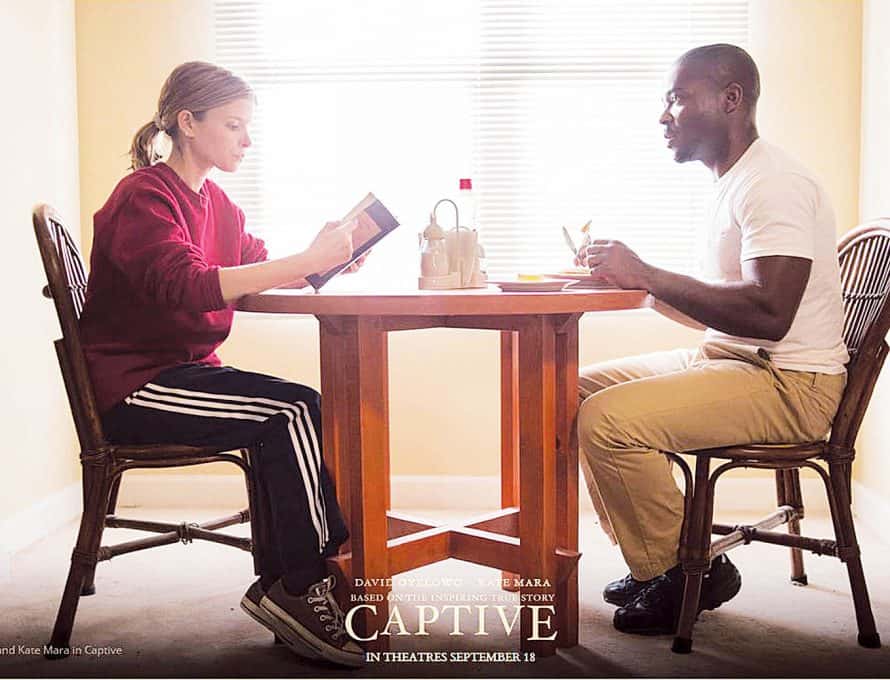 NASHVILLE (BP) – Academy Award nominee David Oyelowo was drawn to his starring role in the movie “Captive” because the true story of the 2005 Atlanta-area murder and hostage saga shows the power of the Gospel to transform lives, he told Saddleback Church pastor Rick Warren.

Oyelowo, acclaimed for his role of Martin Luther King Jr. in the 2014 movie “Selma,” in Captive portrays Brian Nichols, an accused rapist who escapes jail, murders four people and injures others before holding methamphetamine addict Ashley Smith hostage in her home overnight. Smith reads to Nichols from Warren’s book “The Purpose Driven Life,” and successfully encourages Nichols to release her and surrender to police.

“I was less drawn to playing Brian than I was drawn to the effect this event had on Ashley Smith. And as a Christian myself, I was just so taken with the fact that you have a murderer and a meth addict holed up together for seven hours. Somehow out of that comes salvation, hope, redemption, and Ashley Smith in particular stepping into a new chapter in her life where she gets her life back,” Oyelowo said in an interview broadcast on Saddleback’s online church.

“Often what comes out of Hollywood is not edifying, not godly, doesn’t have a moral compass, certainly doesn’t hint at true hope,” he noted. “This was a story that I just knew I had to be part of seeing come to fruition.”

The film showcases Smith as the methamphetamine addict she was when Nichols overtook her outside her home, and brings to screen the story of their interactions before Nichols surrendered to police. Smith had been reading The Purpose Driven Life for the past 33 days, but had succumbed to temptation to use meth twice during that time, including the night before her capture.

It was when she refused Nichols’ offer of meth during the hostage ordeal that God delivered her from the addiction that had robbed her of hope and caused her to lose custody of her daughter, Smith told Baptist Press in advance of a screening of the film that opens nationwide Sept. 18 with a PG-13 rating.

“He asked me three different times, ‘Do you want to use this? How ‘bout you do this with me? Why don’t we do this together?’ And I promise you it was like Jesus was standing in front of me saying, ‘Do you want to live today, or do you want to die today? Because this is your choice,’” Smith said. “And I really honestly believe that if I would have [chosen] to do the drugs that night that I would have died, whether it be by the hands of Brian Nichols or somebody else. But I looked at Brian Nichols and I said I don’t want to use that now and I never want to use it again, whether I’ve got five years to live or I’ve got 50 years to live, and by the grace of God I have not [used it again].”

Instead, Smith has used her life to tell of the forgiveness, deliverance and redemption she has found in Christ. She has remarried, regained custody of her daughter, and is author of “Unlikely Angel: The Untold Story of the Atlanta Hostage Hero.”

Smith had accepted Christ when she was 7 years old and had been baptized by Southern Baptist Convention Executive Committee President Frank S. Page when he was pastor of Warren Baptist Church in Augusta, Ga. During her struggles, Satan tried to convince her she was lost, she said.

“I knew that I was still saved because the Bible tells me that once I’m saved, I’m always saved. But it also tells me that we have struggles and that there’s nothing that we can do that God will not love us,” she said.

Smith believed she deserved to die at Nichols’ hands, she said.

“But it wasn’t until God literally reached down into the pits of hell that my life had become, in my apartment that night and He pulled me out of it. And He showed me, ‘You know what, I love you. It doesn’t matter what you do, who you are, I love you,’” Smith said. “It was like an immediate freedom. … God was asking me to trust Him.”

Oyelowo can relate to Smith’s experience, he told Warren.

“When I became a Christian at the age of 16, it was outside of my religious experience, it was outside of … my upbringing,” Oyelowo said. “I felt God say to me, ‘David there is nothing you can do to make Me love you less. And I truly believe it was a revelation of that fact, in the midst of this event, that started to turn things for Ashley. She had messed up so much that she felt she deserved death, and yet a new hope started rising up in her, partly because Brian was a mirror to her of how bad things can get without the Lord’s intervention.