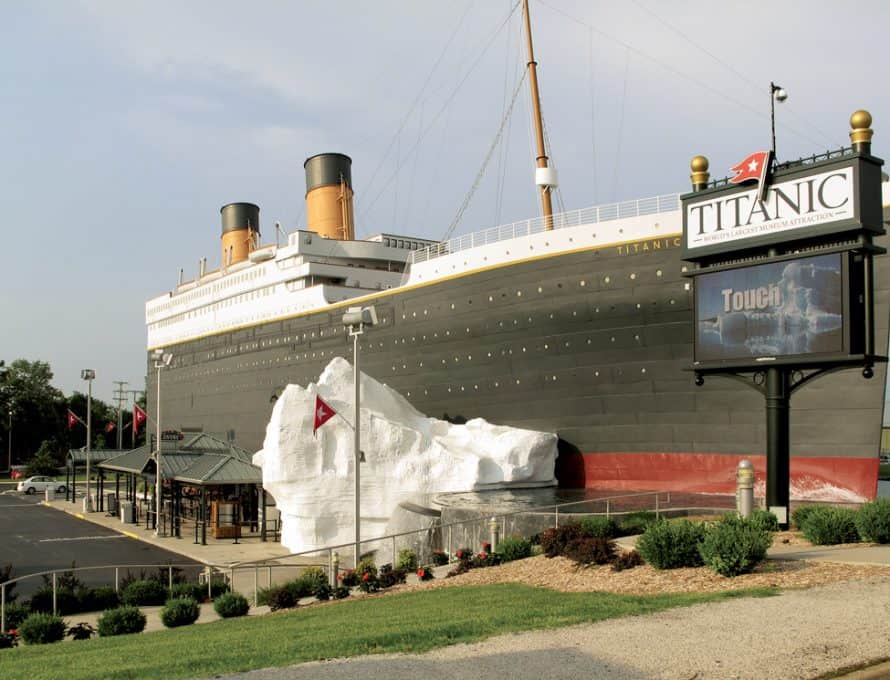 BRANSON – The Titanic museum here is opening its doors for free to Missouri pastors as a way to celebrate Pastor Appreciation Month this October.

BRANSON – Missouri Baptist pastors have been invited to tour the Titanic Museum attraction in Branson for free during the month of October. Normally a $24 admission fee, Titanic Museum spokesman Dale Grubaugh said they are providing the free tickets to clergy as a way to recognize the dedication and hard work of the spiritual leaders in Missouri communities. They invite pastors to be their guests from October 1-31.

Additional guest tickets may be purchased at the regular admission rate.  Grubaugh said pastors should bring a business card, church bulletin or a letter from the church clerk identifying them as a pastor.

He also urged them to visit the website at www.titanicbranson.com and under the Education tab click on the Religious tab to get a taste of some of the spiritual truths that are found in connection with the story of the doomed ocean liner as it sank to the bottom of the North Atlantic  in April 1912.

One of the inspiring stories is of Rev. John Harper, a Baptist minister from Scotland who was aboard the ship, bound for America where he had been invited to preach at the Moody Memorial Church in Chicago. During the tragic night he walked the decks of the ship shouting “women, children and the unsaved first,” as they loaded the lifeboats. He even gave his life jacket to another passenger.

Once in the frigid waters, Harper held on to pieces of wood and continued to urge men and women to trust in Jesus to be saved. One man, who was later rescued, told the story of Harper urging him to give himself to Christ as they paddled in the ocean waters. Harper quoted Acts 16:31, “Believe on the Lord Jesus Christ, and thou shalt be saved… .” The man prayed to receive Christ and told the story many times in the U.S. and Canada saying he was the “last convert of John Harper.”

Grubaugh, who is also a bivocational Southern Baptist pastor, encouraged visitors to the Missouri Baptist Convention in Springfield to take a side trip to Branson and visit the museum or schedule a vacation to Branson during the month. The museum is located at: 3235 W. 76 Country Blvd. in Branson.  Phone: (800) 381-7670.

The month of October was first designated “Clergy Appreciation Month” by the Focus on the Family organization in 1994.  Since that time many churches have chosen to honor their pastoral staff with special emphases and gifts to recognize them for their dedication and service to the Lord.

Gary Mathes, Missouri Baptist Convention pastoral ministry specialist, said he thinks the emphasis is of great value to churches and pastors because “so many of the pastors struggle and feel alone.”  He added, “When a church takes the opportunity to encourage and thank them it adds fuel to the fire and keeps them in the game.”

Mathes suggested several things a church could do to honor pastoral staff:

– Provide a nice dinner, catered in to the church or at a restaurant.

– A gift or trip that is specialized and related to the pastor’s interest such as NASCAR, football, music or travel.

– A cash gift or a gift card is always welcomed.

Chance Glenn, pastor of First Baptist Church, Atlanta, Mo., said the best gift he received was a “Duck Dynasty” pillow and a brand new Stihl chainsaw. Glenn participates in a ministry of their church where they cut wood for needy folks and said the gift is helpful to use.

Another northern Missouri pastor, Walter Griffen, of Broadlawn Baptist Church, Unionville, recalled feeling warm and grateful when he and his wife received a basket of some 40 cards of encouragement from the church last year.  Included was a monetary gift, but he said, “It makes you feel that they understand the role of a pastor and that you need encouragement also.”

Griffen said a great idea is to send a pastor and wife to a pastor’s and wives retreat such as the Minister’s Juggling Act or MB125, both sponsored by the Missouri Baptist Convention.