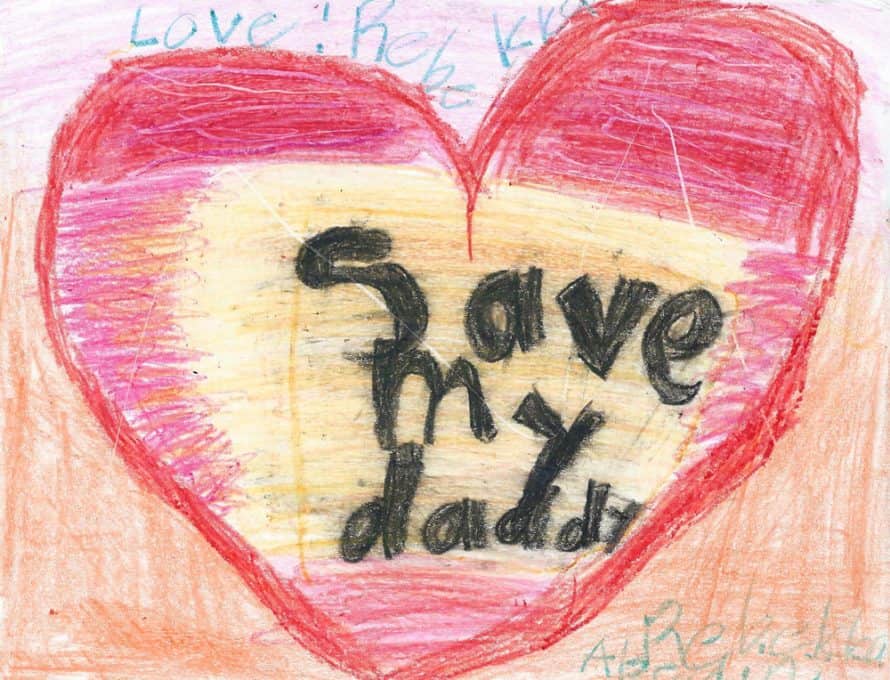 NASHVILLE – This drawing from 9-year-old Rebekkah Abedini pleads for freedom for her father Saeed Abedini, imprisoned in Iran because of his faith in Christ. BP Photos.

NASHVILLE (BP) – The wife of imprisoned American pastor Saeed Abedini is on a 21-day “Daniel” fast and is organizing prayer vigils internationally Sept. 26, the third anniversary of her husband’s imprisonment in Iran for his Christian faith.

Naghmeh Abedini, in asking Christians to pray for her husband and the persecuted church, also is promoting a letter-writing campaign to ask United Nations Secretary General Ban Ki-Moon to advocate for Abedini’s release when Iranian President Hassan Rouhani speaks Sept. 28 at the U.N. General Assembly in New York.

Naghmeh Abedini will attend a prayer rally for her husband and other persecuted Christians at 7 p.m. Sept. 28 at Calvary Chapel in Old Bridge, N.J. In advance of the U.N. sessions that began Sept. 15, she addressed over 100 members of parliaments from 50 nations who held a meeting on international religious freedom in New York, urging the lawmakers to take action in their home countries to encourage her husband’s release.

Imprisonment is taking its toll on the 35-year-old pastor, his wife said on Facebook today (Sept. 16), but he was encouraged to learn of the prayer vigils today from a family member, the first visitor Iran has allowed him in two months.

“His face lit up and he was encouraged to hear that so many are praying for him. He was encouraged to know that a date that brought so much pain had become a day when Christians united together to pray for him and the persecuted church,” Naghmeh Abedini wrote. “I made sure that he was told that I had not given up the fight … for his release. That despite government shortcomings, none of us were giving up. That we were getting on our knees and praying and fasting for him each day leading up to the prayer vigil. I knew that during the short prison visits he needed to know that he was not forgotten.”

Abedini is suffering both physically and emotionally, lamenting the death of his grandmother whose funeral he could not attend, the death of a cellmate due to lack of medical treatment and the absence from his family.

“The beatings and attacks have taken their toll on Saeed and he is in constant pain every day,” his wife wrote on Facebook. “Knowing his kids are growing up without him has made the journey that much more emotional for him. He always wanted to be the dad that poured into his kids every single day of them growing up. He was the more nurturing one of the two of us and cared about each and every milestone.

“Saeed realizes that he has had to give up those things that were so dear to him for the sake of the Gospel and that is the one thing that brings him comfort,” she said of her husband. “Saeed is holding onto hope that one day he will reunite with us again.”

Naghmeh Abedini continues to live in their home in Boise, Idaho, with their two children, 9-year-old Rebekkah and 7-year-old Jacob.

Prayer vigils are scheduled in all 50 states and nearly 30 foreign countries to date, according to the registration page at The Be Heard Project of the American Center for Law and Justice (beheardproject.com/prayer-vigil/saeed). In addition to individual vigils, four opportunities are available nationwide through Facebook and teleconferencing, including a 24-hour prayer conference call at 712-775-7035, through access code 281207, from 9 p.m. Sept. 26 – 8 p.m. Sept. 27, Eastern Time, according to Be Heard.

She has held annual prayer vigils for her husband since his arrest in 2012 while visiting family in Tehran. He was sentenced Jan. 27, 2013, to eight years in prison on charges he threatened national security by planting house churches in Iran years earlier, and had been under house arrest since July 2012.

“I will be fasting from pleasant food (Daniel 10:3 ‘I ate no pleasant food, no meat or wine came into my mouth, nor did I anoint myself at all, till three whole weeks were fulfilled’),” Naghmeh Abedini said. “I plan to abstain from coffee and chocolate. You are free to abstain from food, social media, TV or skip a meal or two…. The point is to spend that time in prayer.”

She is using Hebrews 12:1-2 as a scriptural anchor for the fast.

“The Lord is showing me that as we pray for Saeed and the persecuted Church and remember the ‘witnesses,’” she said, “revival can be brought into our own life and in our country.”