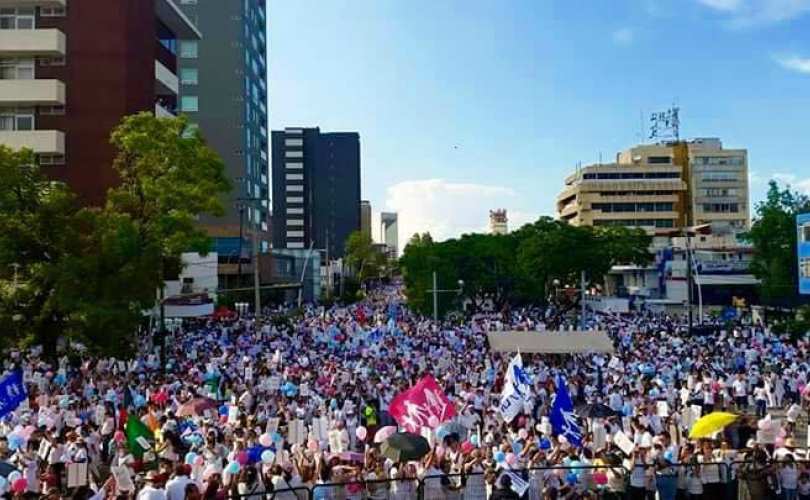 MEXICO CITY – Tens of thousands took to the streets of major Mexican cities under the slogan “Mexico is One for the Children,” to ask the government to respect state constitutions that define marriage as the union of one man and one woman, after a recent Mexico Supreme Court ruling legalized same-sex unions throughout the country.

“We are not against any person, we are against this Supreme Court imposition,” said Sofia Miranda, one of the organizers, in an open letter to media who were criticizing the cause. This, she continued, “opens the door to gender ideology and will destabilize our society and damage our children. This is what we don’t want.”

Marchers were also asking their parental rights be recognized, as Congress is seeking to pass a national law which will “guarantee the access to contraceptive methods” without parental consent to all girls.  The law also states all children have a “right to intimacy,” they should not be discriminated against on the basis of their “sexual preference” and that the state will provide “education and services in regards to sexual and reproductive health” to all children.

“We are asking for the right to educate our own children,” said Adriana Ojeda, head of the movement Si Es Mi Hijo Yo Lo Educo (If it’s my child I will educate him/her), in an interview with LifeSiteNews. “Mexico has signed several international treaties which guarantee us this right. The [new] law is violating them.”

The state of Sinaloa, from which Ojeda is native, is one of the seven states that still haven’t approved the law. These states are asking for modifications in some of the articles to “explicitly ensure our rights as parents,” said Ojeda.

The Sinaloan Congress will vote today on whether to accept the proposed modifications or pass the law with the original text.

The marches took place on July 25 in the cities of Mexico City, Monterrey, Guadalajara, Culiacán, Los Mochis, Aguascalientes, Ciudad Juárez, among others. Guadalajara reunited the most participants. Organizers reported over 80,000 attendants, while some media said only 3,000 supporters gathered.

According to Excelsior, Gabriela Dominguez from the Guadalajara march said: “They are undermining the rights we have as family. I want the opportunity to raise my children according to my beliefs and to what I want for them in the future.”

Several other cities will march for the same cause on August 15.

In the aftermath of the reversal of Roe v. Wade, the Missouri Baptist Children’s Home is standing fir