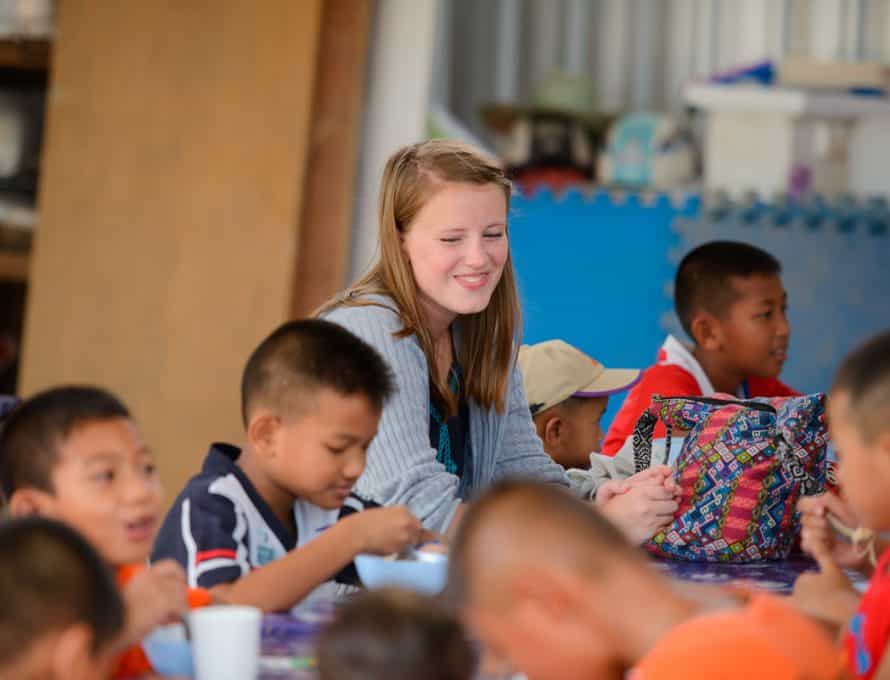 THAILAND – Riverview Baptist church team member Tegan Shockley has lunch with some Thai students during a day of ministry at a Thai public school. Pathway photo by Alan Wohlgemut.

THAILAND – As soon as the mission team from Riverview Baptist Church in Osage Beach finished their presentation in the school, a line of children eager for autographs formed.

“The only other Americans these children had ever seen are on TV, so they were excited,” said Spencer Plumlee, pastor at Riverview. “Each guy on our team had at least 30 students lining up around him. It was a great time to connect and encourage them.”

During their recent mission trip, Riverview’s team and Paissons Church, the Thai church plant they are partnered with, were able to present the gospel to 900 students in several public schools in Thailand.

“The platform we went under was teaching English to students using songs and activities to help them learn,” he said. “We told the school officials we would also like to share the gospel, and they allowed it.”

The church plant pastors plan to follow up on the seeds that were sown during the weeklong trip.

Plumlee said because Thailand is a sort of asylum for many refugees from nearby countries, it welcomes all religion … which is both a blessing and a problem for the gospel to take root.

“People are open to hearing about Jesus, that’s true,” Plumlee said. “But because of their all-inclusive spirituality, many just add Him as another piece to their religious puzzle.”

Which is why Plumlee said Riverview was called to partner with the church there. He said the ends of the earth mentioned in Acts 1:8 are in Thailand, and God can use Riverview Baptist Church.

“Every church is a tool God uses to expand His kingdom,” Plumlee said. “It’s not the job of the professional missionary or the bigger churches down the road to take care of it. We are all part of the plan.”

Riverview is committed in partnership for three to five years with Paissons Church, a church plant that has a vision and strategy to plant more healthy churches in Thailand. They were connected through the Cooperative Program and the International Mission Board, which Plumlee said is the glue that keeps Great Commission Baptists on the field.

“Our prayer is for new healthy churches to begin and for God to raise up new leaders to help see to it that this church planting center grows,” Plumlee said. “Riverview will seek to send a team to Thailand at least once a year, as well as help fund training and resources to invest in these Thai Christian leaders. We are open to a variety of avenues of which to partner.”

He said the question was never whether or not to be part of an international mission. The Bible clearly says for Christians to go. However, Plumlee said the church body took turns praying 24 hours a day for 40 consecutive days to discover the how’s, where’s and what’s of their calling.

“I would encourage any church pursuing missions of any kind to keep prayer the foundation,” Plumlee said. “We prayed to seek wisdom, but we underestimated it as being one direction. It’s not. God uses prayer to change our hearts and prepare His people to take those radical steps that they’ve never taken before.”