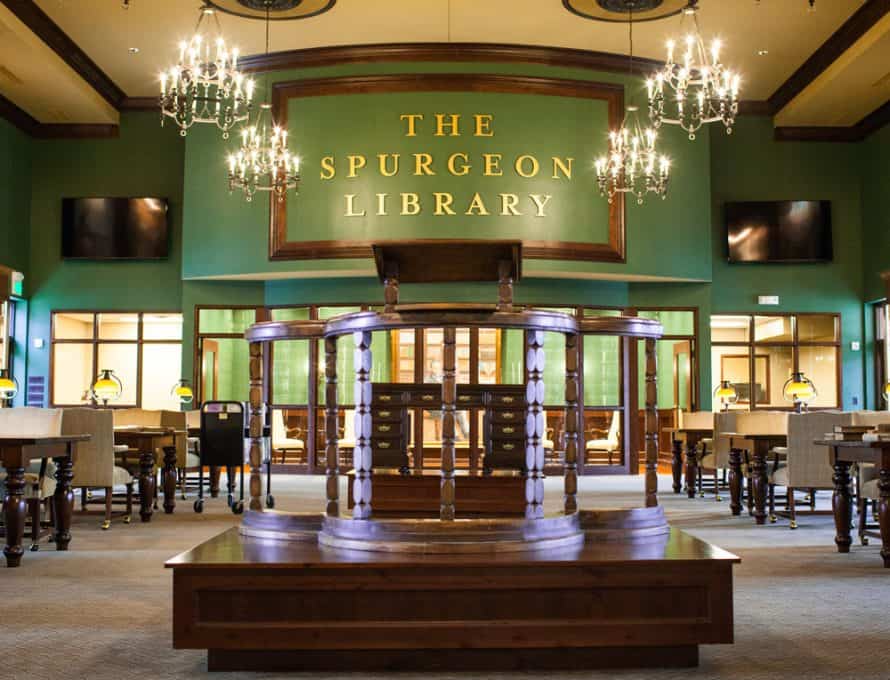 KANSAS CITY – Midwestern Seminary President Jason Allen announced on Aug. 10 the acquisition of a preaching rail from First Baptist Church in Weaver, Ala., which was used by British preacher Charles H. Spurgeon during his ministry.

The rail, which is a piece of furniture that functioned much like a modern-day pulpit, was used by Spurgeon during his 19th century ministry and will now be prominently featured in Midwestern Seminary’s newly completed Charles H. Spurgeon Library.

“The Spurgeon preaching rail makes a signature addition to Midwestern Seminary’s Spurgeon Library,” Allen said. “It compliments over 6,000 books and artifacts of the great Victorian preacher and is prominently displayed within the Spurgeon Library itself. Many consider Spurgeon to be the greatest preacher of the English language, therefore, we consider this rail to be a tremendous addition to our collection.

“I am thankful to First Baptist Church Weaver and Pastor Ron Sweatt for entrusting it to us,” Allen added. “We believe the Spurgeon preaching rail to be a precious stewardship for Midwestern Seminary and the church as a whole.”

According to Allen and FBC Weaver’s Pastor Ron Sweatt, the preaching rail itself has a unique history. W.A. Criswell, the historic pastor of First Baptist Dallas, amassed a large collection of antiques and artifacts during post-World War II overseas trips. It was on one of those trips, in the middle of the 20th century, that he acquired the preaching rail.

In 1976, Criswell gave the preaching rail to FBC Weaver, Ala..

In a letter dated June 30, 1997, Criswell told then-pastor Roger Willmore, “The Spurgeon rail pulpit was there in Spurgeon’s College (in London) before I brought it home. It was used by us in our own Wednesday evening services for several years before it was given to your church.”

Sweatt noted that upon receipt of the rail, considerable reconditioning of the piece was needed, and a church member, Richard Johnson, “did a lot of work to bring it back to its original condition.” He added that FBC Weaver has used the rail in various capacities over the years.

First Baptist Church Weaver possessed the rail for almost 40 years, but has now chosen to entrust it to us so it could receive broader visibility,” Allen noted.

Sweatt “are honored to have the rail displayed in the Spurgeon Library for so many to see and appreciate.”

He added that personally, “It reminds me of the importance and critical nature of the proclamation of God’s Word.  There is no other lasting foundation upon which our lives, churches, and ministries can be built other than the Word of God. My prayer is that God would use it to remind those of us who have been preaching for years to stick with the Word, and to encourage those beginning their preaching ministry to rest and trust in the Word.  To me, the rail also emphasizes that a difference can be made by a person who will surrender to God’s call and will for his or her life.”

The rail will be displayed at the front of the library as one of the room’s primary focal points. Christian George, who is the curator of the Charles Spurgeon Library, said, “Charles Spurgeon was best of all, and most of all, a preacher of the gospel. As soon as you enter the Spurgeon Library, you will see his preaching rail. It’s front and center because preaching played a central role in his, and in our, mission.”

Midwestern Seminary will publicly dedicate the Charles Spurgeon Library during a ceremony on Oct. 20.