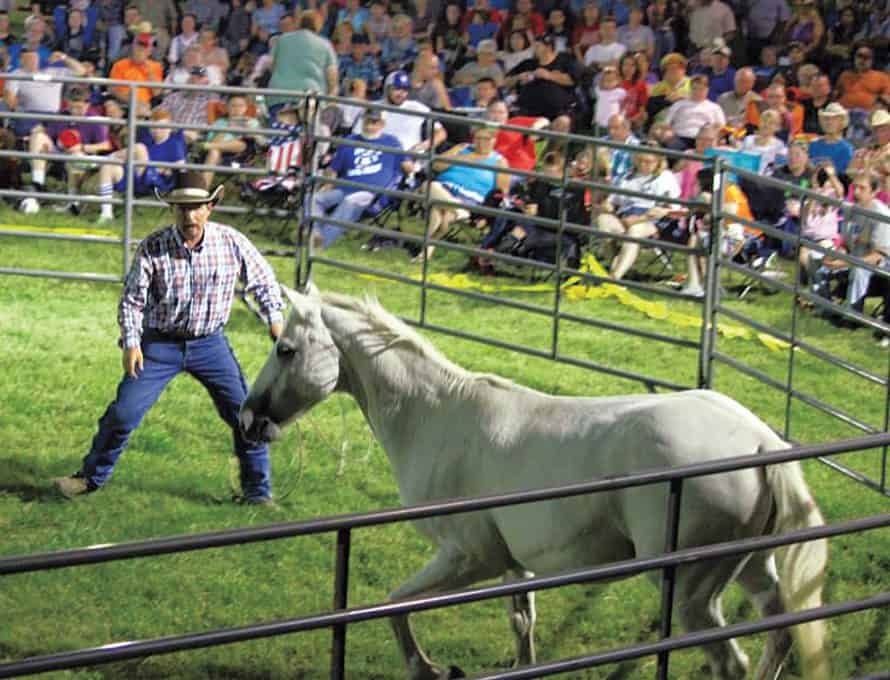 SEDALIA – James Frazier wrestled steers and manhandled broncs as a rodeo cowboy in his youth, but at 45, he has found a calmer, quieter, not to mention safer, way of bringing an animal with a bad attitude in to submission: talking to it.

Frazier will host a free horse whispering demonstration 10 a.m. Aug. 13 at the Mathewson Exhibition Center at the Missouri State Fair. Admission to the Fair is normally $10 for adults and $7 for seniors, but on the 13th, Opening Day, admission is $4 for ages 13 and over, $2 for kids 6-12 and free for kids under 5.

A cattle rancher based in Diamond in southwest Missouri, Frazier forgoes the traditional breaking-in process for a horse, and attempts to quietly build a rapport with the horse, taking into account the motives, needs, desires and mindset of the horse. For the demonstration at the fair, Frazier will enter the pen with a colt with known behavioral issues that refuses riders or to socialize with others.

“Basically, he has a bad attitude,” Frazier said.

While educating the crowd on the way the horse is thinking, Frazier will attempt to earn the trust of the colt to follow his lead. Frazier said he eventually will attempt to saddle and ride the antisocial horse, ideally without the bucking he sought out in his youth.

“Back then I would have wanted him to buck,” he said. “It’s interesting because you’re watching the horse change right before your eyes. It’s a growing experience. A lot of people will actually relate to it because they can see themselves in the horse and the way it’s acting and thinks it knows everything.”

“The relationship between the horse and me relates to the way I was before I came to the Lord,” Frazier said. “I thought I knew better and knew how to live my life best, but He had a better plan for me.”