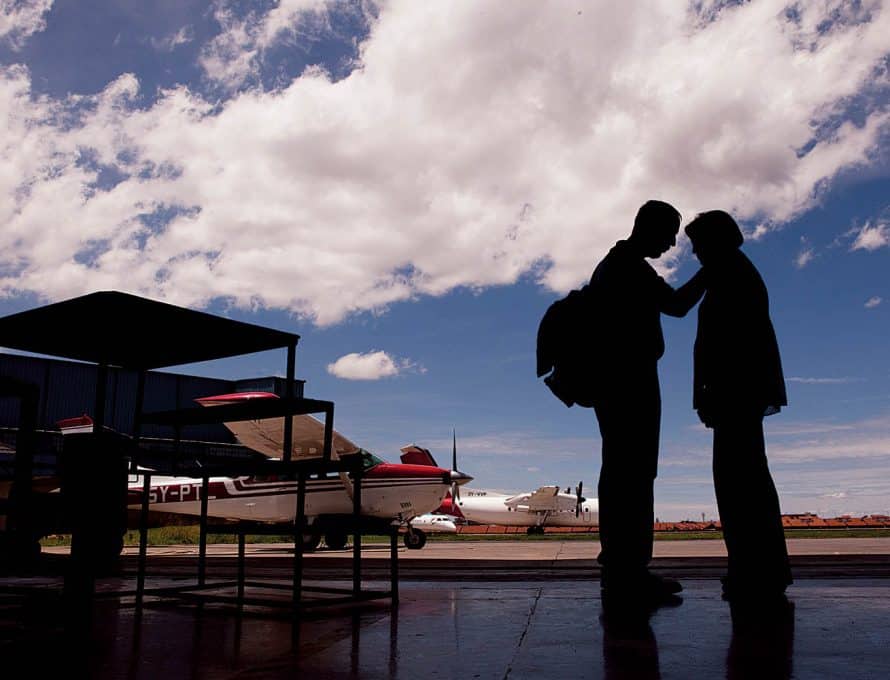 NAIROBI, Kenya – Nik and Ruth Ripken revisit the Wilson Airport here where Nik first boarded a small airplane for Somalia, not knowing when or if he would return. IMB photo.

Editor’s note: Nik Ripken (a pseudonym for security reasons) is a veteran IMB missionary and author who conducted 600 interviews in 72 countries where believers live amid persecution and suffering. Mark Snowden, MBC evangelism/discipleship strategist, interviewed him by phone for The Pathway on July 7.

Q: How should Christians respond to an increasingly hostile culture where moral decline and even legislation is perceived as increasingly anti-biblical?

Nik: The Bible says we reap what we sow. We also cannot reap what we don’t sow. The church in America is reaping what they haven’t sown in America. We have exited the marketplace, leaving it without a positive witness to the love of Jesus. It’s systemic. Schools train pastors and teachers to take care of the sheep, but very few for decades in my lifetime have been sheep among wolves. Religious leaders must look inside ourselves and ask, “How many times have I shared Christ and invited lost people into my house or taken a meal together?” Jesus taught us to break bread in the homes of publicans and sinners. The response of Christians is that the marketplace has become hostile. The fruit that has been borne is hostility. It’s a time for tremendous repentance and humility.

Q: How does the SCOTUS decision legalizing same-sex marriage and the anticipated fall out from that decision actually have the potential to accelerate the gospel in the coming years?

Nik: There has been so much social engineering in the life of America. I’m convinced that God will take the persecution that’s possibly coming to assist the church to get back to our roots to focus on Him and to witness. For who is willing to lose their jobs, lose their lives, and love their persecutors like that? I don’t want to trample on the baker in Colorado [Oregon] who will probably be going to the Supreme Court, but I would want to build 10 or 15 bakeries that cater to the homosexual community as a witness to them to the resurrection of Christ. Of course, the bakers are doing what the Holy Spirit teaches them. Lost people have a greater right to access Jesus than I have a right to exert my religious freedom.

Q: In some Muslim-dominated places in the world, the church thrives. Some missiologists think that pressure has actually contributed to church-planting movements. How do you see God at work in America’s changing cultural environment? Could this contribute to the first industrial-world CPM?

Q: Communists in China tried to shut down all religions. Missiologists have said that it leveled the playing field for the gospel to get a clear hearing. What are some implications that America’s increase in the religiously-unaffiliated (nones) do essentially the same thing?

Nik: The communists in China were foolish. In 1948, anyone affiliated with Christ and the church knew they were going to die because the Communists were not going to stop until they died. However, the Soviet Union swallowed Christians piece-by-piece. They did a magnificent job holding Christians hostage to God’s blessings. China took away everything. Pastors told me, “All we had was the Bible and Holy Spirit.” And that was enough! If you’re going to be killed by the government, then why not go out with a witness? The Soviets were much craftier. The principle is that the more that a movement is tied to buildings, property, and denominations, the more that they can control us. What you don’t want the persecutors to do is hold you hostage to God’s blessings. Last year our denomination gave $12 billion in offerings. Sixty percent went to paying off interest on buildings. We’re spending money on ourselves.

Q: Many believe that America is suffering the beginnings of the Tribulation. Help us have a global perspective on suffering among Christians around the world that should be viewed through an eschatology lens.

Nik: We’ve been where tens of thousands of people have lost their lives. They’ve been in prison, lost kids, and income. They’ve been beaten and frozen. In China from 1948 to 2000, 40 percent of the Church’s leaders were in prison at least three years. We haven’t been persecuted. How can we be so self-centered and we haven’t even lost anything yet? We need to stop whining and start witnessing.

Many pastors in the Soviet Union did believe it was the Tribulation; end times. Many believed the antichrist was Communism. What did this do to their theology when the Soviet Union fell? We spent time with them going through 1 John 4:3. We talk about the antichrist. What they came to believe is that there are always antichrists around the world. These battles are always going on, until that final battle with “The” antichrist. Around the world, 70 percent who practice their faith in Jesus already live in places of suffering and persecution.

Where there’s great harvest there’s great persecution. The church has suffered tremendously and we haven’t even lost our air conditioning. We’re reaping what we did not sow. We’ve got a non-witnessing harvest with less witnessing going on, so we’re more lost. Pastors say they’re training the members to witness. The members say they pay the pastor to witness. There’s a total disconnect.

Q: Thanks for the interview. I’m looking forward to your “Servants in the Crucible” conference. Is there anything else you want to add?

Nik: Jesus has called us to be sheep among wolves. He never called us to be stupid or untrained sheep. That’s why we’re to make disciples. It helps us be equipped to take the gospel of Jesus across the street and into the world.

Nik Ripken is the leader for the “Servants in the Crucible Conference” scheduled at South Haven Baptist, Springfield, Mo. Oct 28-30. It is sponsored by Evangelism/Discipleship Strategies, MBC. Details and registration are online at www.mobaptist.org/servants.