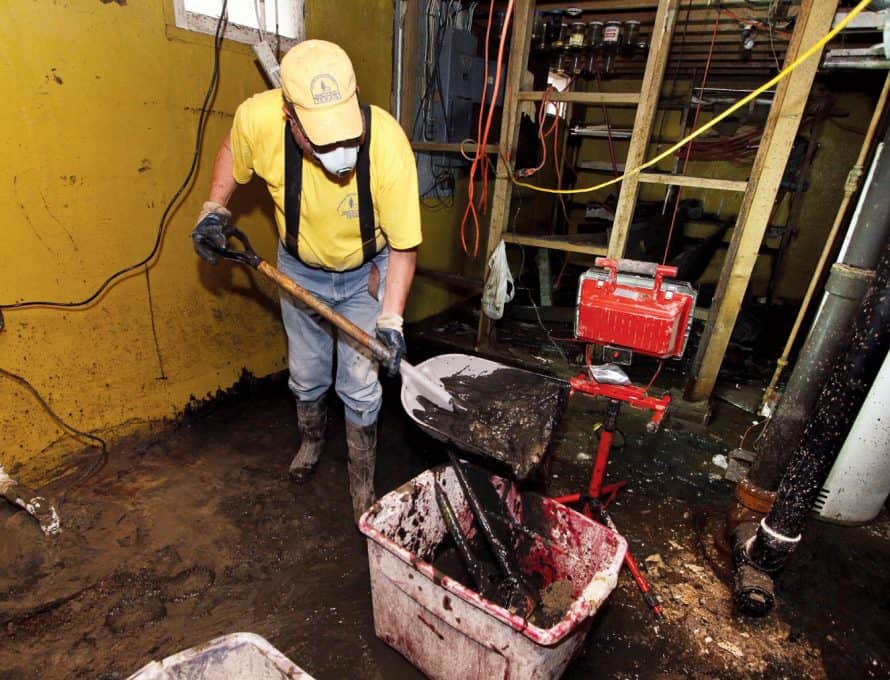 No disaster relief work is tougher than "mud-out," and here, Bill Hyden, Waco, Texas, a member of the Texas Baptist Men DR team and Meadowbrook Baptist Church in Waco, scoops up another shovel of muck from a flooded basement in a Minot, N.D., home. BP photo by Jim Whitmer.

HOUSTON (BP) — Southern Baptists of Texas Convention disaster relief leaders had “boots on the ground” in Houston Thursday (May 28) following a month of historic rains and tornadoes across Texas and Oklahoma that led to deadly flooding over Memorial Day weekend with at least 15 dead and hundreds evacuated.

While images of separated families in raging waters, floating cars, submerged intersections and uprooted caskets caught the nation’s attention and caused an outpouring of concern, Fritz Wilson, executive director for Southern Baptist Disaster Relief at the North American Mission Board, said it is each individual’s unique situation that becomes the focus of a volunteer’s effort.

Every team sent out by Southern Baptist Disaster Relief — the largest network of trained disaster relief volunteers in the United States — brings “help, healing and hope” to those affected by natural events, Wilson said.

“We are there to walk with them through cleaning and when they are beginning to try and get a handle on things so they can rebuild,” Wilson said. “Our folks are trained in how to provide not only physical needs, but also provide emotional and spiritual care in a disaster setting.

“In sending that team, we hope people see that God loves them and we are attempting to show them that — not just tell them,” Wilson said.

In Houston, Scottie Stice, director of Disaster Relief Ministries for the Southern Baptists of Texas Convention (SBTC), said leaders are busy assessing needs after storms over the weekend dumped 6 to 11 inches of rain on the area.

“We want to see exactly which neighborhoods are under water and where they are in the city so that we can formulate our response,” Stice said, noting volunteers must wait until waters recede before they can begin to help.

Houston’s mayor on Tuesday (May 26) said there were at least 4,000 homes and businesses affected by floodwaters. More water may be expected by the weekend.

Texas Baptist Men also has volunteers on the ground in Houston assessing the situation and working with churches, said Terry Henderson, the organization’s director.

Henderson anticipated the Houston response — as well as those throughout other areas of the state — will be long and protracted.

“We will be calling on other states to help us,” Henderson said.

Massive flooding affects half of Oklahoma

Sam Porter, state director of disaster relief for the Baptist General Convention of Oklahoma (BGCO), said this has been an unusual and record year in many ways for the state.

A record 25-30 small tornadoes spotted across Oklahoma were followed by two major tornadoes in Moore, Okla., in March, and then a massive amount of rain in May.

“We had been praying for the drought to break — we now have snorkels up,” he said.

In the past 10 days, Porter said the same system that overwhelmed Texas also impacted Oklahoma.

With a command center set up at First Baptist Church in Norman, Okla., Porter said volunteers are spreading out to meet tremendous needs with homes flooded in 38 of the state’s 77 counties.

With only two mud-out trailers to help, Porter said his greatest challenge has been to think about how to approach the situation.

“This thing is getting to biblical proportions,” Porter said. “We are having floods everywhere. There are not enough mud-out guys across the Southern Baptist Convention to handle this.”

So he prayed, and by Sunday night (May 24) came up with a plan to hold training sessions in order to multiply the laborers — by inviting leaders and volunteers from other faith-based groups and residents.

The training is being held regionally across the state by expertly-trained recovery instructors and there is no charge for those who want to attend, Porter said.

He also brought BGCO leaders on board to film a 30-minute instructional video to post on its website with steps on how to remove water and “wet stuff” and “kill the mold” in order to salvage a home.

At NAMB, Wilson said he has heard from many Southern Baptists who wondered how they could help. In addition to urging prayer, the North American Mission Board sent out a semi-truck loaded down with supplies specifically needed for mud-out operations.

“Coordinating this response through our disaster response center for the body of Christ is really what makes the ministry to the one family, through the team happen,” he said.

In addition to mud-out operations in Norman, a mobile feeding unit began feeding 2,500 a day May 23. Another unit in Poteau is producing 750 hot meals a day.

Other volunteers are working across the state in Atoka, the Tulsa area, Waurika, Lawton and Elk City.

At the end of the day, it’s the recent memory of 21 people who accepted Christ in the middle of their flooded or tornado-torn homes that keeps Porter going.

“We do this because we love God,” he said. “We do disaster relief to earn the right to share the Gospel.”

With “very strange” weather patterns across the Texas plains in May, Stice said its SBTC disaster relief ministry teams have been hard at w