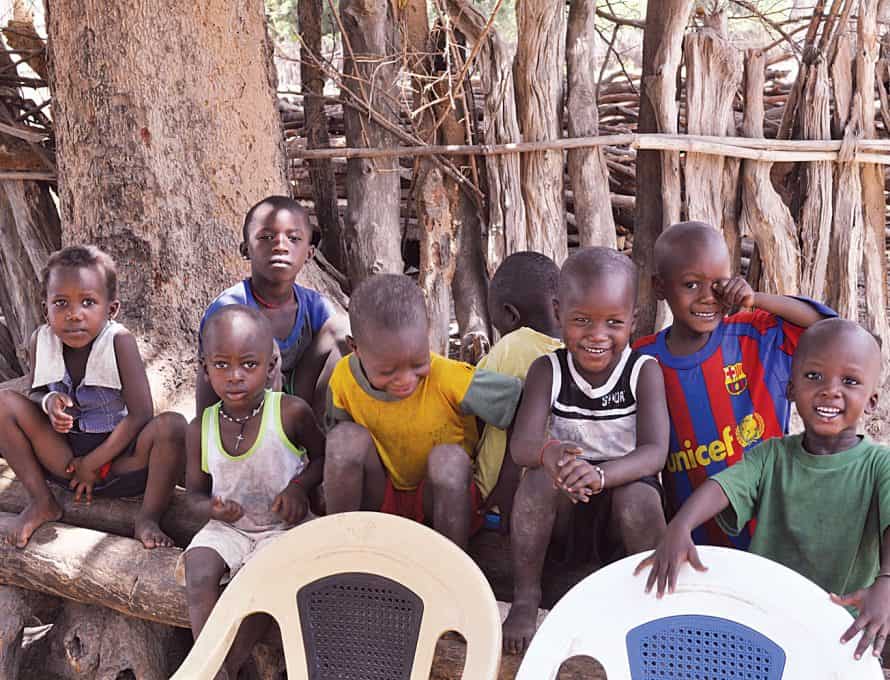 WEST AFRICA – A mission team from Calvary Baptist Church, Neosho, shared the gospel here with children and their parents during a trip at the end of April. Photo courtesy of Calvary Baptist, Neosho

WEST AFRICA – During a mission trip at the end of April, a small team from Calvary Baptist Church, Neosho, witnessed the long-term impact of sowing the gospel among a people group spread across three West African nations.

The team included Calvary’s Pastor Roger Brumley and Missions Minister Tracy Guppy, as well as Brumley’s son, Berrik, who serves as a worship minister in Arkansas.

Although they spent much of their time in regions where the church had worked before, the team of three also entered a new village. On their first visit to the village, one family patriarch eagerly greeted them.

“As we were walking up to the family compound inside the village, this elderly man—who was on a mat and on a raised platform—lifted his head, looked at us, and began to get very excited,” Roger Brumley recalled. “As we got closer, he said, ‘I knew you would be here today. I saw you in a dream last night. Today is the day of my salvation.’”

When they heard this, the team told their translator to share the gospel, Brumley said. Then, “tears were streaming down this elderly man’s face, and he gave his life to Christ.”

As it turned out, this new believer had heard the gospel nearly 40 years earlier from a missionary who had long ago died. Somehow, however, the man heard “that the one who can give life is being talked about again, and he knew this was his time,” Brumley said.

Although they were able to witness this long-awaited harvest of faith, the Neosho mission team labored during much of their trip to help native pastors learn how to use Bible storying for making disciples and planting churches.

After teaching these church leaders during a pastor’s conference, the mission team sent them out to sow the gospel in the community. As a result, more than 70 people heard the gospel, and 14 professed faith in Christ.

“Several of the pastors said, ‘We got to share but we didn’t see anybody get saved,’” Brumley said. “And we reminded them that they planted seed. … They were thrilled in realizing that the seed had been sown, that those words were now truth in people’s lives” and that eventually someone else could reap a harvest among those same people.

Since beginning its mission work in West Africa nearly 10 years ago, Calvary Baptist, Neosho, has desired to equip native Christian leaders in the area to make disciples and multiply churches.

“The exciting thing is that the churches we started are starting new churches now. We’re seeing second and third generation churches. This is what God asked us to do. So that is the exciting part for me.”