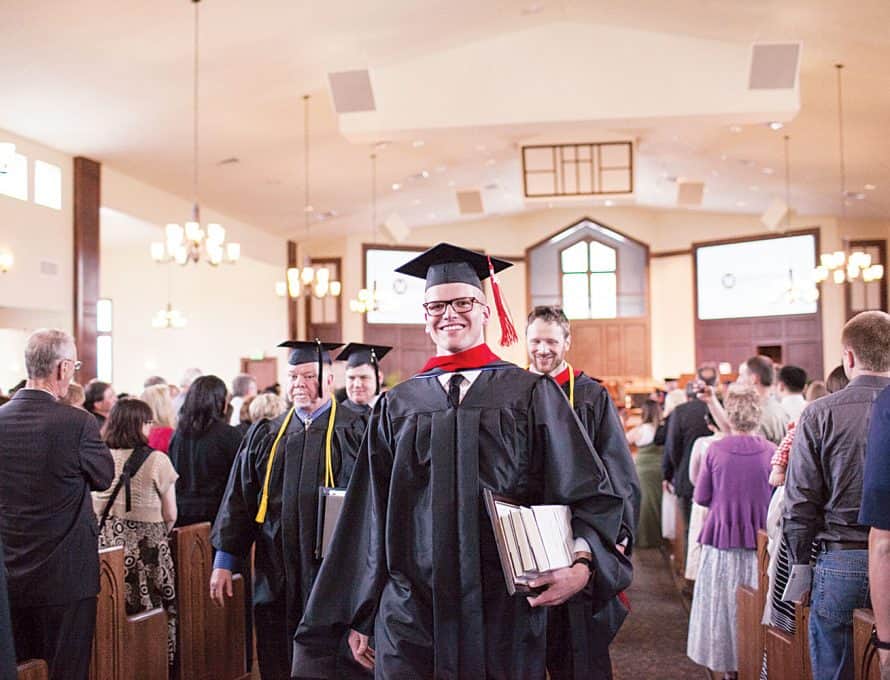 In all, 109 students graduated, encompassing five diplomas in Christian ministry and 27 undergraduate, 58 graduate and 19 doctoral degrees.

Key moments in the May 8 ceremony included Midwestern President Jason Allen charging students in his commencement address that, “We Cannot Stop Speaking,” and the presentation of the seminary’s Professor of the Year award.

In an exhortation from Acts 4:1-22, Allen noted how President Calvin Coolidge was a man of few words who stated, “The words of a president have enormous weight and ought not be used indiscriminately.”

The opposite should be true of graduates and all Christians, Allen said. “The words of the gospel have enormous weight,” which is “precisely why we must use them indiscriminately. We have something to say as Christian ministers, and we best be about saying it for the rest of our days on the planet.”

In Acts 4, the apostles Peter and John are shown as two men who could not stop speaking. From this example, Allen said, graduates will find that when one does not stop speaking of the gospel, he or she will encounter opposition.

Verses 8-12 remind the Christian minister that he or she must speak, Allen said, noting that Peter had been transformed through the power of the Holy Spirit from a scared disciple-in-hiding to a bold proclaimer of Jesus Christ and the exclusivity of the gospel.

“As ministers in today’s world, we are to speak where the Bible speaks, and the Bible speaks to issues of morality, sexuality, marriage, lifestyle and a whole host of issues,” Allen said. “You will preach a lot of things; you will counsel a lot of things; you will speak to a lot of issues; but I pray – at the heart of your ministry – there will be a resolute commitment to speaking the gospel of Christ.”

From verses 13-16, Allen noted that there is a power we must know – while Peter and John were uneducated and untrained roughnecks, they exuded a gospel confidence that was empowered by the Holy Spirit.

From verses 17-22, Allen focused on the boldness that ministers must have. Peter and John were told in no uncertain terms to keep quiet about speaking the name of Jesus. They were in trouble with the religious leaders.

“In the first century, it seemed to be God’s plan to use the governmental authorities to tell the church to shut up in order to get the church to speak up,” Allen said. “Perhaps in the 21st century, that will be as well…. Possibly one day they will be seeking silence, to tell us to curtail … the gospel witness and biblical message. God, through that, would have us not to be silent, but to speak more loudly.

“May it be true of us, and may it be true of this graduating class, and always and evermore of this institution that whether or not it is perceived as socially or culturally right to be men and women of biblical conviction, that our testimony will always be, ‘We cannot stop speaking,’” Allen said.

Following his address, Allen announced Midwestern’s Professor of the Year – Robin Hadaway, dean of students and professor of missions who has ministered at the seminary since 2003, including more than a year in the role of interim president.