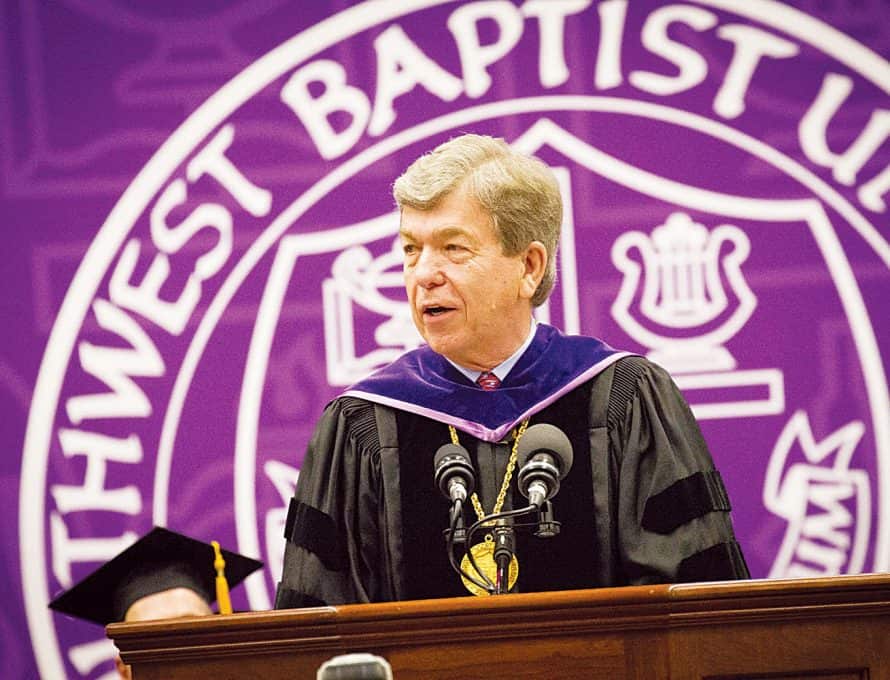 U.S. Sen. Roy Blunt delivered the commencement address at the undergraduate ceremony. Prior to being elected to the United States Senate in 2010, Blunt served as Missouri’s Secretary of State, in the U.S. House of Representatives, and as president of SBU from 1993 to 1996.

He challenged students to cherish and protect the American right to religious freedom, as well as to build their lives on Gospel truth. “Southwest Baptist University is a place where you come and learn not just how to make a living, but where you can come and learn how to live a life, and particularly to live that life on the life framework of the Gospel,” he said.

He encouraged students to embrace the exciting time in which they are living and to look forward to all of the possibilities, opportunities and advancements that the future holds.

“I think that we live in a very exciting time,” he said. “Part of the excitement is that we can’t predict what the world will look like in the next few decades, but it is a world that has lots of potential opportunities for us.”

Taylor encouraged students to resolve to serve the Lord with their lives, citing the biblical story of Ananias, who was called by God to minister to the Apostle Paul shortly after his remarkable conversion on the road to Damascus. “I have a meaningful question to ask of you: Are you prepared to serve God, and will you make the choice to serve God?” Taylor asked. “Your decision to serve God is indeed your choice.”

“Do not allow the things of your past to stop you from serving God,” Taylor said. “Look ahead, not back.”