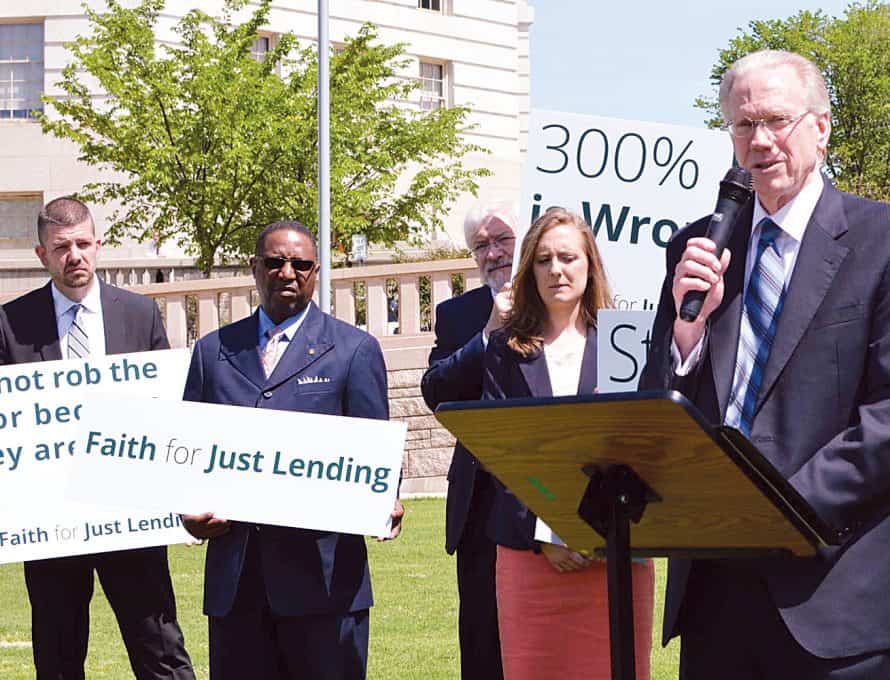 WASHINGTON – Barrett Duke, ERLC vice president for public policy, addresses a news conference May 14 in which the SBC ethics entity and other groups announced a new Faith for Just Lending Coalition to target predatory lending. Photo by Doug Carlson.

The ERLC joined with other religious organizations, May 14, to announce the Faith for Just Lending Coalition at a Capitol Hill news conference. The diverse alliance that includes Baptists, other evangelical Christians and mainline Protestants seeks to raise awareness about predatory lending and to motivate individuals, lenders, churches and the government to help bring an end to the practice.

Commonly referred to as payday lending, the growing practice often draws poor people especially into a debt trap by charging excessive, and often misleading, interest rates, according to coalition members.

More than 20,000 payday and car-title loan stores exist in the United States, according to the coalition. Payday lenders also operate online in a country that has a variety of state and local laws regarding the practice.

Coalition members decried the predatory practices of payday loans in introducing their effort.

Predatory payday lending “grinds the faces of the poor into the ground,” ERLC President Russell Moore said in a written statement announcing the coalition’s formation. “As Christians, we are called by Jesus, by the prophets and by the apostles to care for the poor, individually, and also about the way social and political and corporate structures contribute to the misery of the impoverished.”

Barrett Duke, the ERLC’s vice president for public policy, said at the May 14 news conference, “God is not an economic Darwinist. He does not believe in survival of the fittest when it comes to the treatment of the poor.

“The Bible speaks clearly about appropriate ethical behavior in business,” he said. “[God] didn’t oppose financial transactions, but He did, and He does, oppose predatory activities that take advantage of someone, especially the poor.”

Messengers to the 2014 SBC meeting approved a resolution that denounced predatory payday lending and called on the adoption of government policies to end the practice.