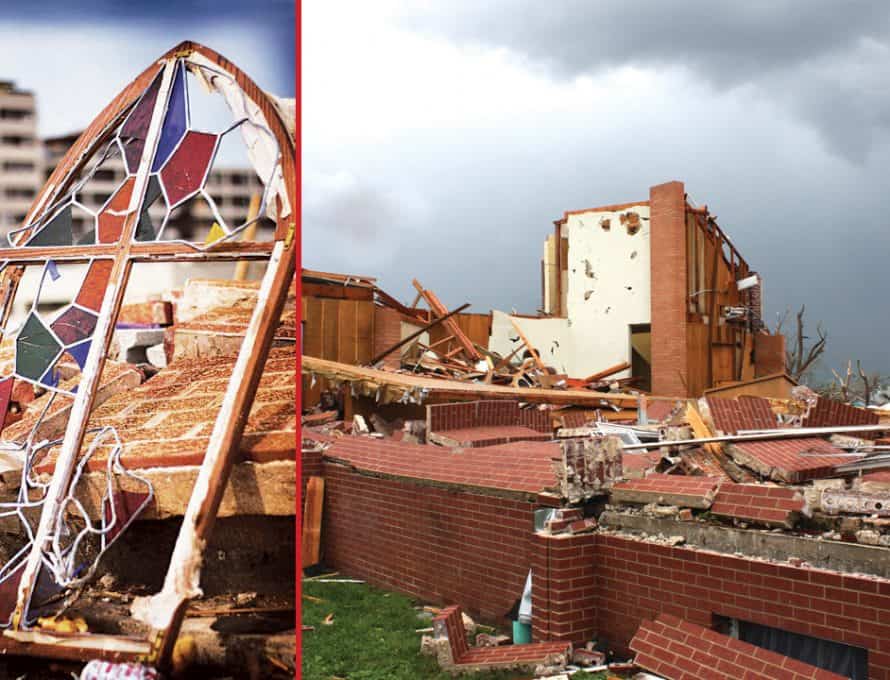 JOPLIN – (Left, BP photo) A broken and battered stained glass window depicts the destruction of the Stained Glass Theatre here due to the May 22, 2011, tornado that leveled a mile-wide path across the city and killed more than 150 people. (Right, Pathway photo by Brian Koonce) The building of Empire Baptist Church in Joplin, Mo., was destroyed by the May 22, 2011, tornado.

CARTHAGE — After an EF5 tornado carved a mile-wide path of destruction through the city of Joplin on May 22, 2011, Thad Beeler surveyed the damage in his parents’ home. The tornado uprooted three large trees, throwing them on top of the house. It flipped his parents’ car and wrapped it around a neighbor’s tree. It ripped a six-foot-wide patio door out of the side of the house and drove a block of wood through three walls and a toaster oven.

But Beeler thought it odd that family photos and artwork hanging on the walls looked undisturbed, as if nothing had happened. He then looked outside the window and noticed the remains of a neighbor’s house.

“That house didn’t have walls, let alone pictures,” he said.

The following day, Beeler was at the First Baptist Church of Carthage, where he serves as music minister and ministry outreach director, when a gentleman came in and asked what he ought to do with a photo that had fallen in his lawn, roughly a dozen miles from Joplin.

In response to this man’s question, Beeler and the members of FBC Carthage have endeavored during the past four years to piece together lives shattered by the Joplin tornado by restoring lost photographs. As a result, Beeler received an Exemplary Community Achievement award during a banquet hosted by the Missouri Humanities Council at the National World War I Museum in Kansas City, May 2.

During the past four years, Beeler and members at FBC Carthage have collected, cleaned and systematically preserved nearly 40,000 photos lost during the Joplin tornado, some of them discovered as far as 200 miles away.

Through what they call “reunification events,” the church has also returned more than 17,600 photos to their owners. During these events, “reunification specialists” trained in grief counseling help people locate their lost photos, listen to their stories and offer, alongside other resources, a gift Bible. Today, the remaining photos are held at a Joplin museum, which partners with FBC Carthage occasionally to host additional “reunification events.”

So many people “had nothing left” after the tornado struck Joplin, Beeler said. “I mean nothing. The clothes on their back was all they had. Those folks have been so tremendously affected by people here who just wanted to (give) something that was special back to them. We’ve just shown them Christ in what we’re doing. We’re not trying to shove it down their throat, but have just shown them in a different way that people in the church can love on you in a difficult time.”

Beeler recalled the story of one family, who had lost everything–not because their home was completely destroyed, but because all their personal belongings were contaminated by chemicals and radioactive materials from a nearby hospital that had been destroyed.

“They weren’t allowed to go back to the house for photos,” Beeler said. “The only ones that they could get back were found in farm fields.”

The “Lost Photos of Joplin” project has gained recognition around the globe because Beeler and the volunteers at FBC Carthage developed a system for returning photos that never before existed.

Last year, Beeler spoke to 500 members of the Association of Professional Photo Organizers in Dallas, Texas, who wanted to be certified in the Missouri church’s method for recovering photos and returning them to their owners. The church has also offered help following disasters in Moore, Okla.; Washington, Ill.; Baxter Springs, Kan.; and Granbury, Texas. They received calls for aid and advice after Hurricane Sandy hit the United States’ Atlantic coast in 2012 and after a 2011 Tsunami flooded the coasts of Japan.

As a result of this widespread attention, the photo recovery team at FBC Carthage is now developing curriculum to train other people to collect, restore and return lost photos.

“I look at this (ministry) today, and I look at the potential for this in the future, and it is enormous,” Beeler said.

“I believe churches are absolutely the most uniquely suited to handle this. The church is one of the only organizations that deals with life and death matters from very birth to very death,” he said. And this photo recovery ministry deals with people’s intimate lives and memories. “I believe with my whole heart that this is something that churches can do.”

“Why God landed (this ministry) here, I don’t know,” Beeler added. “But I do know that we chose to follow His lead, and we’re going to keep doing that until He shuts the door.”

To learn more about this photo recovery ministry, visit nationaldisasterphotorescue.org.