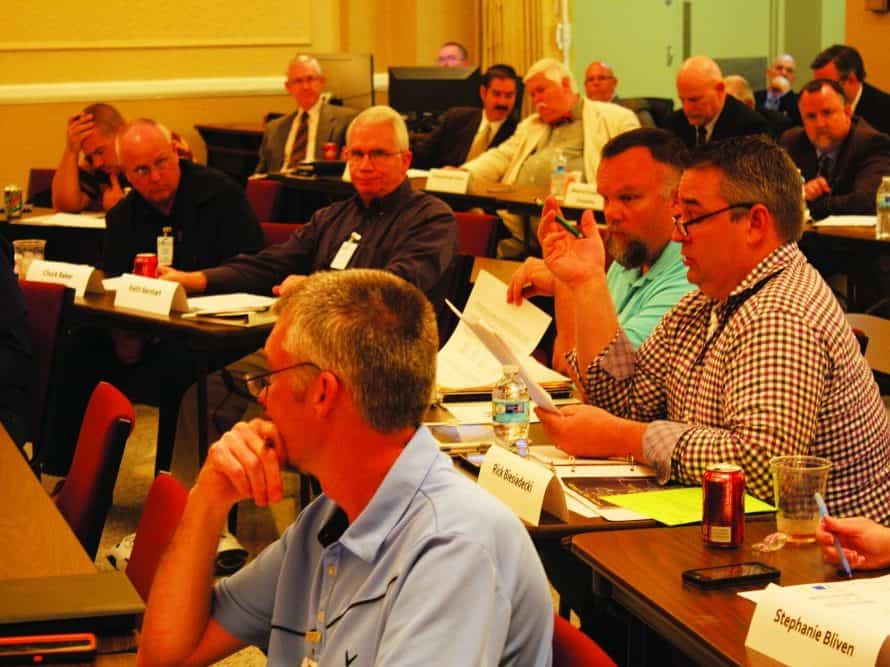 During their meeting, the board also approved the use of an “underspend” of 2014 CP funds and the use of remaining funds gained from the MBC’s partial settlement with the Missouri Baptist Foundation. They also amended a 2014 motion concerning the liquidation of a portion of the MBC’s Windermere Wilderness property.

Their decision followed an influx of giving among Missouri Baptists in 2014, in which churches outstripped the 2014 goals for CP, Lottie Moon, Annie Armstrong and the Rheubin L. South Missouri Missions Offering (MMO). In 2014, churches gave $14,828,008 to CP. The 2016 CP goal matches this amount.

“Our churches made great sacrifice in this stagnate economy to increase their cooperative mission giving,” MBC Executive Director John Yeats said following the meeting. “As a result of the 2014 receipts being 2 percent higher, we should respond by moving 2 percent more to the ends of the earth via our partner ministries with the Southern Baptist Convention.”

The executive board also took steps toward allocating CP gifts equally between the state mission work and the national Southern Baptist Convention. This initiative is commonly called “50-50 by 2020.”

According to their April 14 recommendation, 5 percent of the 2016 CP goal of $14.8 million is set aside in a “shared expenses” category, which is allocated for annuity protections and The Pathway. This has been part of the allocation since 2012. From the remaining CP funds, 42.5 percent goes to Southern Baptist Convention (SBC) ministries, 41.5 percent is allocated to MBC missions and ministries, and 16 percent is allocated to MBC institutions, including the Missouri Baptist Children’s Home, Hannibal LaGrange University and Southwest Baptist University.

“While the percentage changes look small, this is not a small step toward touching the world with the gospel” Yeats said. “As we move forward, I trust we will pray, be faithful with the dollars entrusted to us by Missouri Baptist churches, and do our collective best to deliver more resources toward reaching those who have never heard the gospel.”

In 2014, the MBC missions ministries spent $70,773.82 less than the amount designated in the annual budget. During their meeting, executive board members approved the use of these funds. In the first place, $3,538.79 will be sent to Hannibal-LaGrange University and Southwest Baptist University for student scholarships. Second, $44,061.62 will fund “negative balances” on the MBC’s High Point Property Construction, as well as the restoration of the Baptist building’s lobby and Gold Room. Finally, remaining funds will be used for other building improvements and projects at the Baptist building that resulted from deferred maintenance.

Early this year, the Missouri Baptist Convention received a $5 million partial settlement in its legal efforts to restore the Missouri Baptist Foundation as an entity accountable to the convention. This payment was made by the foundation’s insurer, Church Mutual Insurance.

As reported by The Pathway in January, the MBC immediately used these funds to retire all outstanding debt. This included $1.53 million owed to the Baptist Foundation of Oklahoma for the purchase of 970 acres that formerly were part of the Windermere Baptist Conference Center; $2 million to Hawthorn Bank to pay off loans to cover legal expenses; and $675,000 to the Executive Board to replenish reserve funds borrowed for legal fees.

This left $803,255.42, which was placed in reserve until the executive board determined how it should be used.

During their April 14 meeting, board members approved the use of this balance from the legal settlement. First, they set aside $203,000 and authorized the executive director to make a ‘named’ gift for the MBC to each entity that remained loyal during the litigation process. Furthermore, they authorized the executive director, with the same funds, to “retain PhilanthroCorp”—an organization that helps Christian ministries manage planned giving, estate planning and the sale of assets—“to assist MBC and its churches with legacy giving and other philanthropic giving over the course of the next 18 months at a rate of $3,000 per month.”

Second, the board placed the remaining $600,255.42 in the Agency Restoration Group (ARG) account to serve as a reserve in case future litigation expenses exceed CP Plan A funds.

During their December 2014 meeting, the executive board made a motion to liquidate a roughly 230 acre portion of the 970 acres of Windermere Wilderness property “for the creation of a cash reserve to be used for payment on the principle of the $1.6 million dollar loan from the Baptist Foundation of Oklahoma.” However, since the MBC retired this debt with funds from the $5 million partial settlement with the Missouri Baptist Foundation insurer, board members at their April 14 meeting agreed that “the stated purpose of the December motion is irrelevant.”

For this reason, they amended the motion to read as follows: “That the Executive Board authorizes the liquidation of a portion of the Windermere Wilderness property for the creation of a restricted reserve account to be used in the future as determined by staff recommendation and Executive Board approval.” The land available is on the southern end of the property and not as suitable for future use.

In other business, the MBC Executive Board approved the following recommendations:

• They approved a $1,500 raise for full-time MBC employees. In January 2015, the MBC gave full-time employees a $1,500 bonus to offset an increase in spouse/family insurance premiums. The board’s latest decision made this amount into a permanent salary increase. Also, in order to provide this raise without bumping employees into higher pay grades, the board increased the maximum salary scale for each pay grade. The MBC has five pay grades.

• They authorized the MBC executive director “to execute necessary documents” and to use reserve funds in order to purchase a parking lot near the Baptist building in Jefferson City. They also authorized the executive director to sell a gravel lot, which is undeveloped and further away from the Baptist building than the proposed parking lot would be.