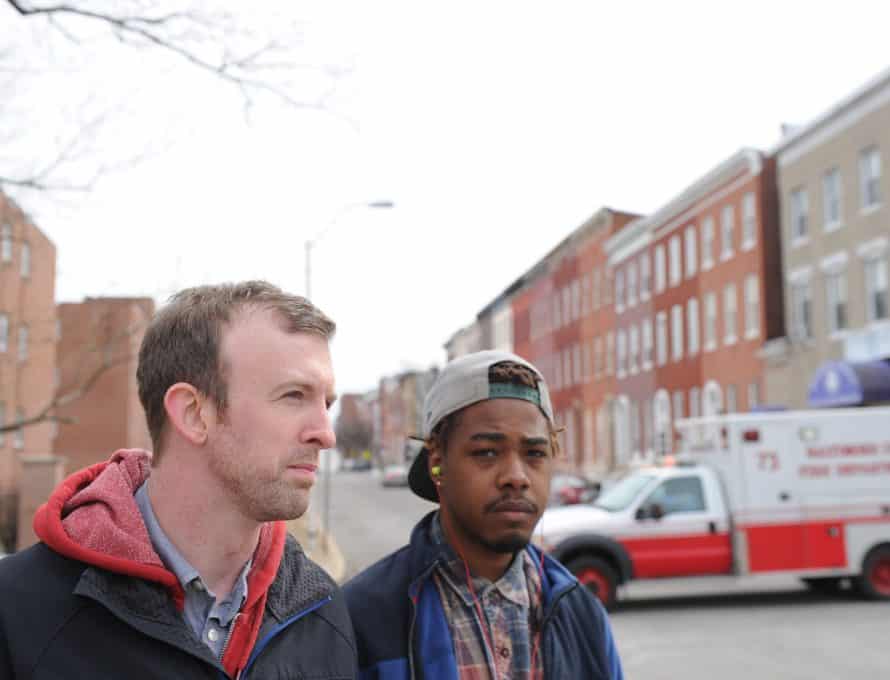 Joel Kurz (left), pastor of The Garden Church in Baltimore, spends time with church member and former drug dealer, King Thomas, who came to faith in Christ. Thomas is now a part of the church. Kurz is leading church efforts to assist in the clean up and ministry to their neighbors following a night of looting and rioting in the city April 27.

BALTIMORE – Joel Kurz watched in disbelief Monday night as the Baltimore neighborhood where he has pastored since 2008 erupted in violence and flames.

“The CVS Pharmacy that was looted and set on fire is the place where our sick and elderly people go for their medicines,” Kurz said. “As you walk up and down the street, every strip of stores has broken glass. Many of them have been looted and damaged.”

Kurz pastors The Garden Church, a congregation he started shortly after he and his wife, Jess, moved to the community. It is a racially mixed church. About half of the members are African American and about half are white. They meet in the neighborhood Elk Lodge.

“One of our members knows the family of Freddie Gray,” Kurz said. “So it has been an emotional issue and a personal issue in our church from the beginning.”

Baltimore has been a community in unrest since Gray, a 25-year-old African American, died of injuries sustained while in police custody. That unrest flared into a full-out riot in some parts of the city Monday afternoon and evening, April 26.

But Kurz says the conflict that grew to lawlessness and violence Monday night has been just below the surface for quite some time.

Kurz started Tuesday morning in prayer with fellow pastors before heading out to the streets to help with cleanup efforts and to hopefully begin the process of healing as well.

Fellow Southern Baptist pastor and church planter Brad O’Brien was one of those linking arms with Kurz. O’Brien was at the local Ace Hardware at 8 a.m. buying trash bags and work gloves.

“I am joining a group of pastor friends this morning and we are heading out to the streets to help with cleanup,” said O’Brien.

A group of Southern Baptist pastors is having a prayer meeting right now and we are hitting the streets at 9 a.m.,” O’Brien said.

O’Brien and his wife, Jenna-Marie moved to Baltimore a little over two years ago and planted a new church. That church eventually joined with Lee Street Baptist, a 158-year-old congregation, to form Jesus Our Redeemer Church. O’Brien and his church were featured in the North American Mission Board’s presentation at the Southern Baptist Convention Annual Meeting last June in Baltimore. The congregation is located four miles Southeast of the CVS Pharmacy that was burned by rioters Monday evening.

When rioting broke out yesterday O’Brien called church members and asked them to pray for the community with their families and friends in their homes. Violence has not touched his neighborhood where the church is located, but peaceful protesters have been present.

“I have been preaching through the book of Proverbs and discussing friendship,” O’Brien said. “We have been talking about how we can be the best friend to our community right now.”

O’Brien said there is a close-knit group of Southern Baptist pastors in Baltimore who gather regularly for prayer and other activities. That is the group that will be on the streets helping with cleanup today. He asked that Southern Baptists join them in prayer for the city.

“We know that if the gospel can resurrect our dead hearts then it can bring hope to this community,” he said. “Our hope is not in our mayor, not in our police chief or the governor. Our hope is in Christ alone.”