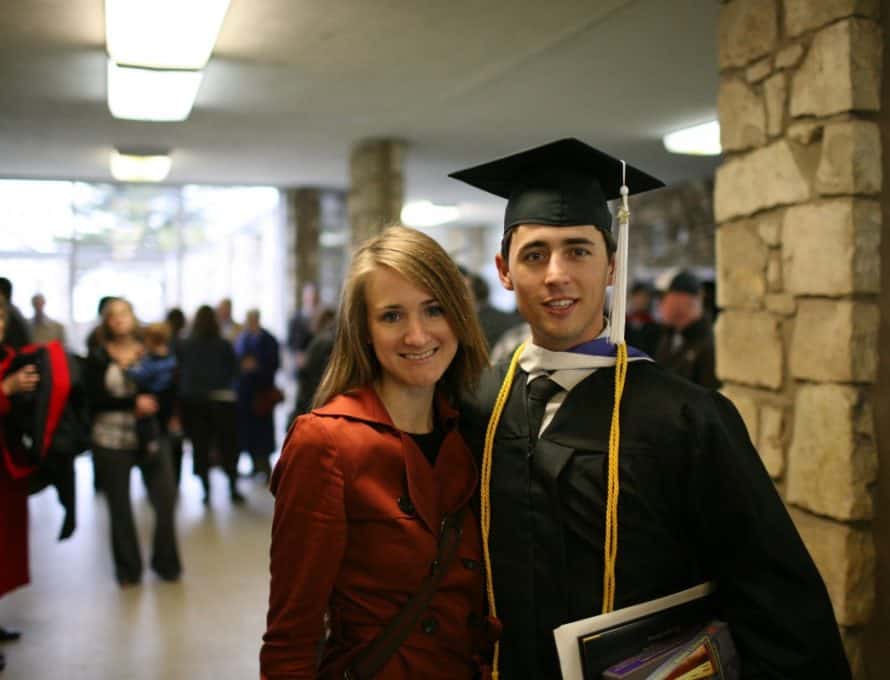 Joshua Brosseau celebrates with his wife, Katie, after graduating from Midwestern Baptist Theological Seminary with a Master of Arts in Biblical Languages degree on Dec. 16, 2012. (BP Photo)

KANSAS CITY (BP) – Since the Southern Baptist Convention’s founding in 1845, the SBC’s primary – and most unifying – effort has been collaborative missionary efforts. That was our raison d’ê·tre in 1845 and it remains so today.

Yet, even during the SBC’s earliest years, theological education was an accompanying concern. Early SBC luminaries such as R.B.C. Howell, W.B. Johnson, Basil Manly Sr., Basil Manly Jr. and, most especially, James P. Boyce called for a common theological institution in the South.

A seminary is founded

By the mid- to late 1850s, Boyce had arisen as the effort’s most prominent and successful leader. Boyce’s “Three Changes in Theological Institutions,” delivered as his inaugural faculty address at Furman University in 1856, called for a dramatic reconceptualization of theological education that would produce a clergy abundant in number, well learned and doctrinally sound. Boyce’s vision was realized in three short years with the founding of the Southern Baptist Theological Seminary in 1859.

For nearly 50 years Southern Seminary enjoyed sole status within the SBC. Given its uniqueness as the only Southern Baptist seminary and the celebrated status of its faculty, it is difficult to overestimate Southern Seminary’s influence on the SBC during the first 50 years of its existence.

Yet, even in the early decades an uneasy relationship existed between Southern Baptist churches and their seminary.

An intuitive suspicion of higher education in general – common in the 19th-century agrarian South – intensified when concerns related to higher criticism, Baptist origins and, into the 20th century, the fundamentalist/modernist controversy arose. By the early decades of the 20th century, modern biblical criticism had moved from occasional occurrence to more common acceptance by Southern Seminary’s faculty.

Carroll, pastor of the prominent First Baptist Church in Waco, was a titanic figure in Texas and Southern Baptist life. Southern Baptists, like the rest of the country, had moved westward, and by the early 20th century the need for a complementing institution was apparent. Texas Baptists • and their financial and demographic strength – were more than ready to support Southern Baptists’ second seminary.

During the interwar years in Southern Baptist life, the SBC morphed from a loose collection of churches into a more functioning denomination, as witnessed through the establishment of the Cooperative Program, the adoption of the first convention-wide confessional statement and the formation of the Executive Committee. This era also saw the more formal engrafting of Southern and Southwestern seminaries into the SBC, wherein they reaped the benefits of the Cooperative Program and came under more direct SBC control.

Under Carroll’s leadership and that of his notable successor, Lee Scarborough, Southwestern Seminary’s rise was meteoric. So much so, by the 1960s its enrollment rivaled – and then surpassed – that of Southern Seminary. By the latter decades of the 20th century it was Southern Baptists’ most influential seminary in terms of enrollment, prominence of alumni and broad popular appeal due to its comparatively conservative faculty.

The post-war era, especially from 1945–1960, was a period of dramatic denominational expansion. The SBC had congealed into a more structured, operationally mature and nationally ambitious denomination. SBC annuals from this period reveal a sense of near-unbounded optimism.

Intramural theological disputes appeared almost without end in state papers throughout the SBC’s first century of existence. Yet, widespread theological controversy, which could potentially lead to significant schism within the SBC, occurred only episodically, most especially in the Toy Controversy, the Whitsitt Controversy, and the Fundamentalist/Modernist Controversy.

By the mid-20th century, theological liberalism nevertheless was well entrenched – if not widely perceived – in Southern Baptist seminaries. Higher criticism, the documentary hypothesis, naturalistic explanations for Scripture’s miraculous events and a denial of the historical accuracy of the Bible were all commonly held among SBC professors.

During this era, seminary leadership tended toward the managerial, not the theological. Like the SBC as a whole, programmatic and administrative concerns tended to displace doctrinal ones at the seminary level. This is clearly reflected in trustee minutes from the 1950s, where enormous energy is given to the tedious, administratively mundane, all the while faculty additions occurred with little attention given to theological matters.

These realities, the need for faculty members at the newly launched seminaries and Southern Seminary’s 1958 controversy coalesced to spread heterodoxy. Dubbed the Lexington Road Massacre, 13 theology professors were dismissed from Southern Seminary in 1958. The establishment of Southeastern and Midwestern seminaries provided the perfect “work needed/help wanted” scenario, leading these professors to relocate to Wake Forrest and Kansas City, thus metastasizing theological liberalism within the SBC.

By the end of the 1950s, a pronounced theological divergence existed just under the surface between Southern Baptist seminaries and the churches they ostensibly served. This dissonance continued to grow in scope, public awareness and convention-wide concern. This can be seen most especially through the Elliott controversy of the early 1960s, the Broadman Commentary controversy of the late 1960s and, as an artifact, the Hollyfield Thesis of 1976.

By 1979, when the Patterson-Pressler coalition formally launched what has come to be known as the Conservative Resurgence by mustering enough votes to elect Adrian Rogers as SBC president, there was undeniable dissonance between Southern Baptist seminaries and the vast majority of SBC churches.