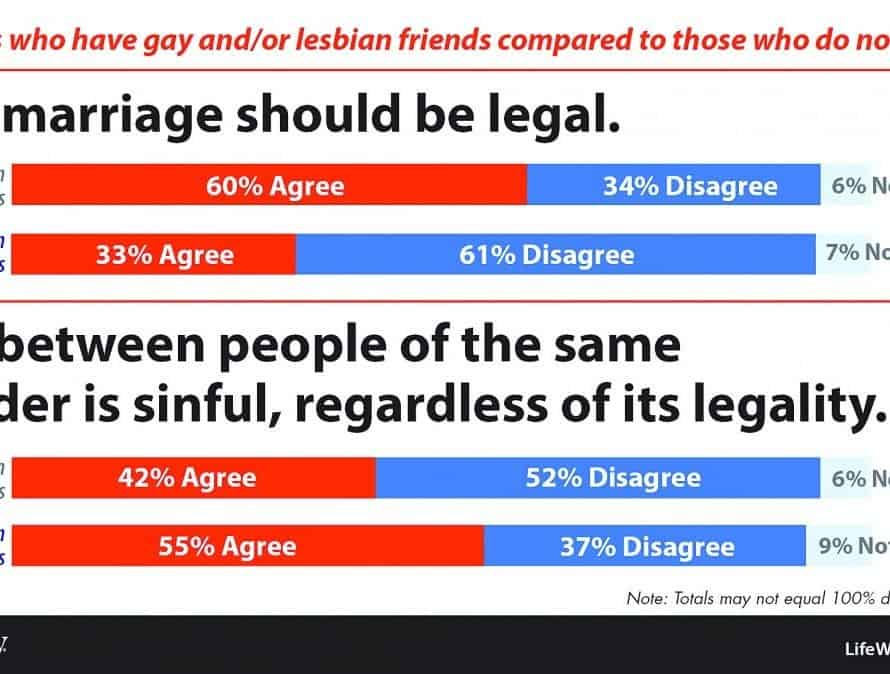 NASHVILLE (BP) – Americans who have gay or lesbian friends are twice as likely to say gay marriage should be legal as those who have none.

And more than half of Americans, meanwhile, say homosexuality is not sinful.

Such survey results place evangelicals increasingly in a minority position in American culture over same-sex relationships.

Nashville-based Lifeway Research, in a phone survey of 2,000 Americans on gay marriage, reported that friendship and faith play an influential role in how Americans view the issue.

“When it comes to support for gay marriage, a lot of it depends” on who one’s friends are, said Ed Stetzer, executive director of LifeWay Research. “Those who have gay or lesbian friends are the most open to gay marriage.”

Among faith groups, Catholics (56 percent) agree more than Protestants (40 percent) that it should be legal but less than the non-religious (73 percent).

“Culture is dramatically shifting on the issue,” Stetzer said.

Researchers found similar responses to the statement, “I believe that sex between people of the same gender is sinful, regardless of its legality.” Just under half of Americans agree (46 percent) while the same number disagree. Seven percent are unsure.

For comparison, LifeWay Research also conducted an online survey, asking 2,252 Americans, “Do you believe homosexual behavior is a sin?”

Eight in 10 of the senior pastors (80 percent) disagree with the statement, “I see nothing wrong with two people of the same gender getting married.” That includes 74 percent who strongly disagree.

About 1 in 5 Protestant senior pastors (18 percent) agree with the statement, including 1 in 10 (11 percent) who strongly agree.

“Church leaders have traditionally been seen as the champions of all things moral in society,” Stetzer said. “As public perceptions of morality change, pastors find themselves in an increasingly unpopular position.”