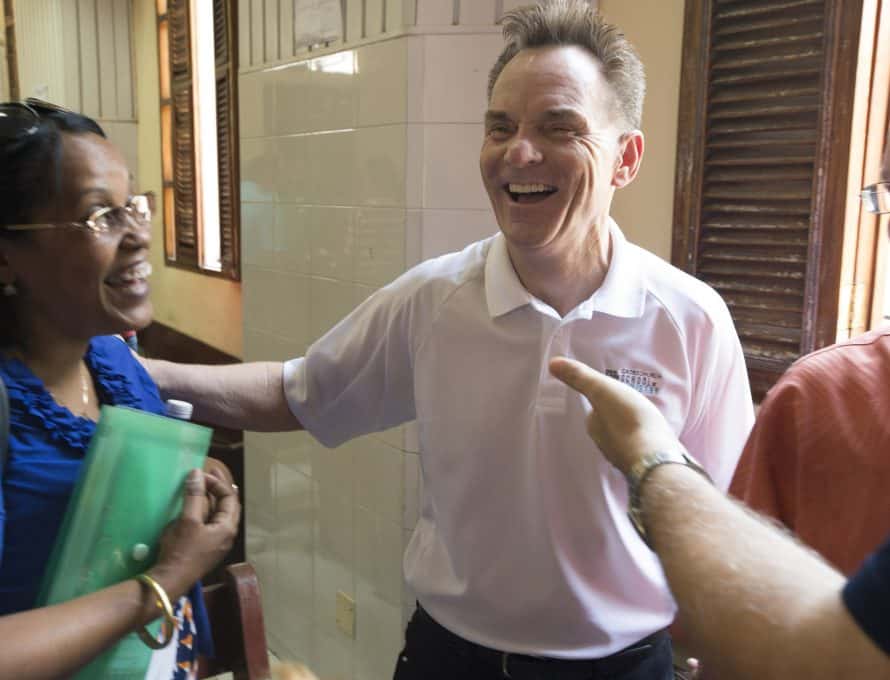 During a late-March missions congress of the Eastern Cuba Baptist Convention, a Cuban Baptist participant (left) gets acquainted with Southern Baptist Convention President Ronnie Floyd (second from left) and other visiting Southern Baptist leaders. Floyd said he wanted to see for himself the spiritual awakening sweeping Cuba after hearing Cuban Baptist pastors speak about it during the SBC annual meeting last June. Photo by Chris Carter/IMB

BAYAMO, Cuba (BP) — Southern Baptist Convention President Ronnie Floyd believes the church-planting movement sweeping Cuba could happen in the United States if Southern Baptists and other U.S. believers commit themselves to “extraordinary prayer for the next Great Awakening.”

“There has never been any great movement of God … that was not first preceded by extraordinary prayer of God’s people. And we need a mighty spiritual awakening in our nation,” said Floyd, who last year began an ongoing call to Southern Baptists to pray for a spiritual awakening that could have a global impact.

While visiting Cuba for the first time in late March, Floyd saw firsthand the fruits of a spiritual awakening that began in the island nation more than two decades ago. “It’s obvious that there has been a mighty move of God here. … And prayer preceded this movement,” Floyd, pastor of Cross Church in Springdale, Ark., said while in Cuba.

At the invitation of the International Mission Board, Floyd traveled to Cuba with three other Southern Baptist pastors and a team of IMB leaders and missionaries to attend a missions congress of the Eastern Cuba Baptist Convention at First Baptist Church of Bayamo, Cuba.

Floyd said he was moved by the testimonies of several Cuban Baptists who soon will go out as international missionaries, the first to be sent by mission boards of the Eastern Convention and the Western Cuba Baptist Convention. Hearing them express their willingness to “forsake all” to answer God’s call was “a powerful, engaging experience for me — one that I will never forget,” Floyd said.

The first Cuban Baptist missionaries expected to go — possibly as early as May — are two couples and a single woman who will work with unreached people groups (UPGs) in South America, pending the granting of visas from their host countries, said Kurt Urbanek, IMB strategy leader for Cuba. One of these couples will help take the Gospel to Afro-Ecuadorians in Ecuador, working with IMB missionaries Johnny and Donna Maust, who were featured in the 2014 Lottie Moon Christmas Offering emphasis.

“Cuban Baptists have prayed to be able to send their own international missionaries for 54 years,” said Urbanek, author of “Cuba’s Great Awakening: Church Planting Movement in Cuba.”

Now, because of recent changes in Cuban law, Cubans are able to travel outside of the country for two years without an exit visa, Urbanek said.

During the missions congress, more than 200 additional Cuban Baptists committed their lives to global missions service, he said. At least 150 of them made public commitments after Floyd preached on Acts 1:8 at the close of the conference.

Seeing that response was “one of the most powerful moments God has ever given me in ministry,” Floyd said. “I give Him praise.”

The missions congress focused not only on international missions but also on Cuban Baptists’ efforts to reach their own nation for Christ. Daniel Gonzalez — one of three Cuban Baptist pastors who spoke during the SBC annual meeting in Baltimore, Md., last June — reported on “Urban 20/20,” a plan for “saturation church planting” in the 20 most populated cities in Cuba by the year 2020. So far, most of Cuba’s church-planting movement has occurred in rural areas, but about 50 percent of the country’s population lives in these urban centers, Urbanek noted.

Scroggins, one of the visiting U.S. pastors, said he was impressed by this and other innovative strategies Cubans use in evangelism and church planting.

“I have a lot to learn from them,” Scroggins said. “I’m going to go home more inspired to pray, to think strategically and to worship passionately.”

Ethridge said no words could prepare him to see Cuba’s spiritual awakening up close.

“When we got into the [first worship service],” Ethridge said, “the energy, the joy, the presence of the Lord was in that place…. They want [missions] to happen in Cuba and from Cuba to the nations.”

Rice said, “Those who truly treasure what they have in Christ are the most appreciative, the most full of love and passion for the things of God.

“I think in America we’ve lost that,” he noted. “We take so much for granted. We’ve fallen in love with others things.”

He added: “We are going to have to recover … the things that matter most if we’re going to see a church-planting movement take place in America…. We need to come here and learn.”