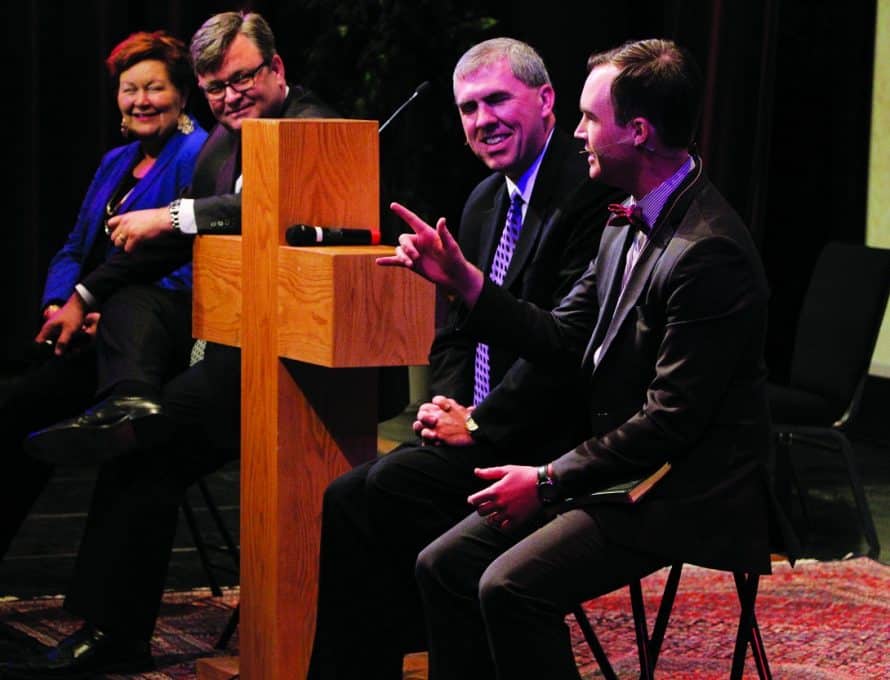 HANNIBAL – For the second year in a row, figures from Hobby Lobby’s Supreme Court battle for religious freedom headlined the Missouri Baptist Convention’s Worldview Conference. Unlike last year, they were not merely waiting on a verdict. This time around they were rejoicing in favor before the court and God’s grace.

Mike McAfee, director of faith initiatives for Hobby Lobby and the son-in-law of the company’s president, Steve Green, opened in a way that may surprise critics of the Supreme Court decision last fall, which said the family-owned company did not have to pay for employees’ abortion-causing drugs. He prayed, thanking God for government, including President Barack Obama and legislators that backed the law the company challenged. He told the story of the arts and crafts chain through the lens of Romans 13. In this passage, Paul details a Christian’s duty to the government including submission, respect and taxes.

McAfee argued that an understanding of the gospel shapes one’s understanding of government, and shaped Hobby Lobby’s decision to fight what it considered to be an unjust law contrary to God’s decree to value life. He said that Christians must acknowledge that God has delegated authority to all government, and that God commands believers to honor that government. However, he also pointed out that there is a difference between what is moral and what is legal, and that God must be honored before any government.

“The gospel creates supportive citizens with limited loyalty to our God-given government,” he said. “But the state cannot define what is moral and what is legal is not necessarily moral. It is godly sometimes to disobey delegated authority for the sake of obeying God. Paul was continually told to stop preaching the gospel, and he would not keep his mouth shut, even in jail.”

Submission to God’s will was at the forefront of Hobby Lobby from day one. It’s founding purpose statement in 1972 says the owners “value our customers and employees and are committed to: honoring the Lord in all we do by operating the company in a manner consistent with biblical principles, serving our employees and their families by establishing a work environment and company policies that build character, strengthen individuals and nurture families, providing a return on the owner’s investment, sharing the Lord’s blessings with our employees, and investing in our community.”

He argued the family sees the success of their 600 stores as a call to godly stewardship. They give away half of the company’s profits and try to run the company with 1 Corinthians 4:7 in mind: “For who makes you so superior? What do you have that you didn’t receive? If, in fact, you did receive it, why do you boast as if you hadn’t received it?”

The early documentation of the family’s religious convictions was part of the reasoning that led the U.S. Supreme Court to side with the company in a 5-4 vote last summer.

One of the lawyers arguing on behalf of the Green family and their company was Joshua Hawley, also a Constitutional law professor at the University of Missouri’s law school. Though that case dealt mainly with the Federal Religious Freedom Restoration Act, Hawley said that law and the Constitutionally protected freedom of religion are indeed under attack.

He also spoke on the kind of service “the Constitution requires, and to which we are called as servants of Jesus Christ.”

“When it comes to the United States, what we need to be fighting for is Constitutional redemption,” Hawley said. “What I mean by that is it is incumbent on us as believers to stand up and fight for the principles on which the Constitution was founded. At this hinge point in our history, we as believers have the privilege of reminding our fellow Americans of the mission we as a country took for ourselves in 1776, the commitment to freedom and the rule of law made in 1787 for all Americans. Here is why: Because at the core of our Constitution and the American experiment, is a commitment to religious liberty. It is what defines our constitution and our entire system of government. It is the foundational right and the key to understanding our whole Constitutional order.”

Hawley argues that a commitment to religious liberty first and foremost is what makes the United States’ governing document different from all others.

“It is truly what sets us apart,” he said. “But ultimately, we as believers know that freedom is grounded in the Lordship of Jesus Chirst. This is why we must be committed to religious liberty for everyone. Above all, we want the name of Jesus to be lifted high. This is why government must be limited; Christ is king, government is not.”

The Affordable Care Act’s – also known as Obamacare – attempt to force Hobby Lobby to violate its owners’ principles are just one attack at this concept, Hawley said. Others include the notion that churches are no different from any other club or business and thus cannot discrimate in their hiring based on beliefs, and that both public and privately held companies should be treated the same way.

“So what must me now do?” Hawley asked. “The time has come again to take up the clarion call of John Leland and William Wilberforce and defend the religious liberty of all people – all people – in our country. Christians and non-Christians. Isn’t it appropriate that the Church of Jesus Christ defends the liberty of everyone else? They may not stand up for us, but we must stand up for them.”