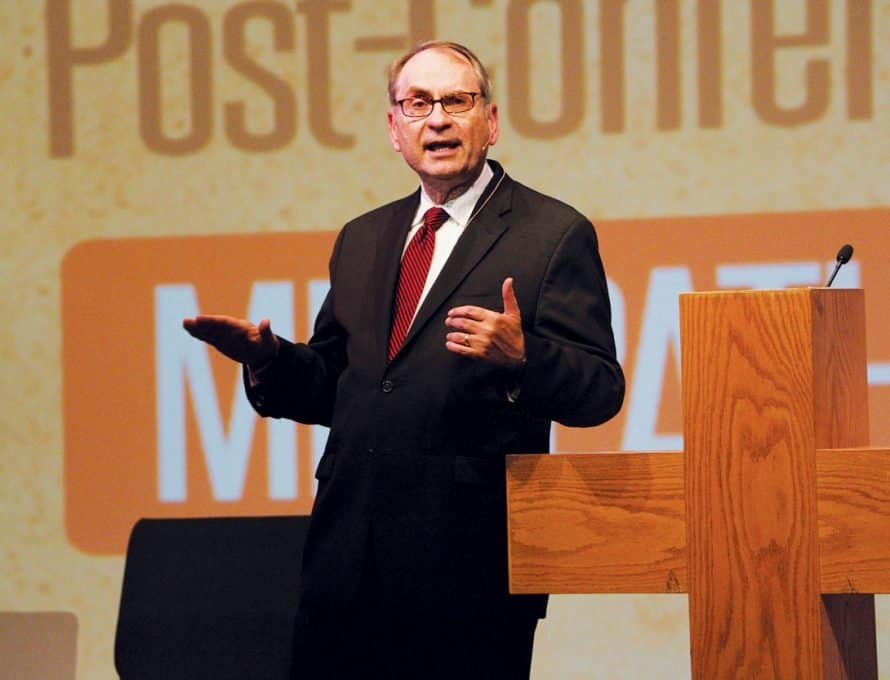 HANNIBAL – If the United States Supreme Court (SCOTUS) rules in favor of same-sex “marriage” this summer, Christians around the nation will face increased pressure to lay aside their convictions about traditional marriage. For this reason, churches must defend religious liberty and prepare for persecution, according to speakers at the Missouri Baptist Convention’s (MBC) Worldview Conference at Hannibal-LaGrange University here, April 2.

Baptists have long defended religious liberty for all people, said Bart Barber, pastor of First Baptist Church, Farmersville, Texas. They did so because Scripture itself promotes religious liberty. Take, for example, Jesus’ Parable of the Wheat and the Tares, Jesus’ declaration to Pilate that His kingdom was not of this world, and the prayers of the martyrs in Revelation 6:9-11.

“Religious liberty is essentially this,” Barber said, considering these martyrs’ prayers: “That God has called us to wait patiently for His mighty arm to vindicate Christianity rather than to use the coercive force of human government to attempt to do it for Him. …

“We live in the kingdom of waiting. … It is not a passive kingdom—the Day of the Lord is coming—but it is a patient kingdom.”

As Christians await Christ’s return, however, “Satan is determined to oppress” them, said Barber, reading from Revelation 12:17. “All religious persecution is demonic at its source,” and throughout history “popes, kings, inquisitors general, missionaries, pastors, and laypeople alike have sometimes been the tools used by Satan to persecute God’s children.”

However, churches in the United States recognized at the nation’s founding that “the government cannot make a Christian,” Barber said. “It can only make hypocrites.”

Likewise, the U.S. government recognized that “no army, no weapon, no dungeon, no instrument of torture, and no form of execution is strong enough to break the conscience of a faithful follower of Jesus Christ.”

“Eventually, after centuries of attempts in Europe, our American government realized that a faithful heart, though it be housed by even the most frail of human bodies, is a force stronger than all the devices of man,” he said.

Nevertheless, Satan is still intent upon warring against God’s people. In fact, this “is the primary factor at work in international relations,” Barber said, reminding his audience that “apart from the Civil War, the United States of America has never been at war with any country that enjoyed religious liberty.”

“Our ‘global war on terror,’” he added, “is actually a war between people who generally affirm religious liberty and people who do not.”

Yet religious persecution is not only an international affair, but is also present in the United States—especially persecution ignited by debates about homosexuality and same-sex “marriage.” For example, U.S. Navy Chaplain Wes Modder was recently relieved of duty for teaching his denomination’s biblical views about homosexuality. Meanwhile, in Atlanta, Ga., Fire Chief Kelvin Cochran was fired from his job for writing a book in which he expressed biblical views about the sin of homosexual conduct. And, in Richland, Wash., Baronelle Stutzman faces losing her business—Arlene’s Flowers—and her home unless she provides flowers for and participates in same-sex “weddings.”

Barber encouraged Christians not to panic, but rather to pray, to defend religious liberty and to remember that, by faith in Christ, they have a liberty from sin that is far greater than freedom from government coercion or persecution.

Barber also encouraged churches to prepare for increased persecution—a theme that was elaborated upon later in the day by Michael Whitehead, the MBC’s chief legal advisor and principal of Whitehead Law Firm LLC in Kansas City.

Whitehead urged churches to prepare for this summer’s SCOTUS ruling about same-sex “marriage” by amending their constitutions, by-laws and other church documents in order to clarify what they believe about marriage. He handed out to his audience a model policy that churches could use for this purpose (Missouri Baptist churches may access this policy for free at www.TheWhiteheadFirm.com).

Churches that do not limit the use of their buildings are, according to Missouri law, public accommodations, Whitehead said. And, although Missouri non-discrimination laws do not yet apply to “sexual orientation” and “gender,” this may someday change even in a Republican run state like Missouri. If this happens, churches will face legal pressure to lay aside their convictions about traditional marriage.

“Don’t bank on Country Club Republicans to protect your religious liberty,” Whitehead said, adding that Christians in America are responsible for defending religious liberty and for supporting biblical values in the public square.

“Your vote matters,” Whitehead said. “Your Christian citizenship counts. … Go out and confront the culture. Exercise your rights of liberty and citizenship while we still have the rights. We may not have them forever, but we have them today. And God expects you to protect the right to preach the gospel. We’re commanded to be salt and light. Salt will slow down the decay of culture … so we’ll have more time to preach the word … .”