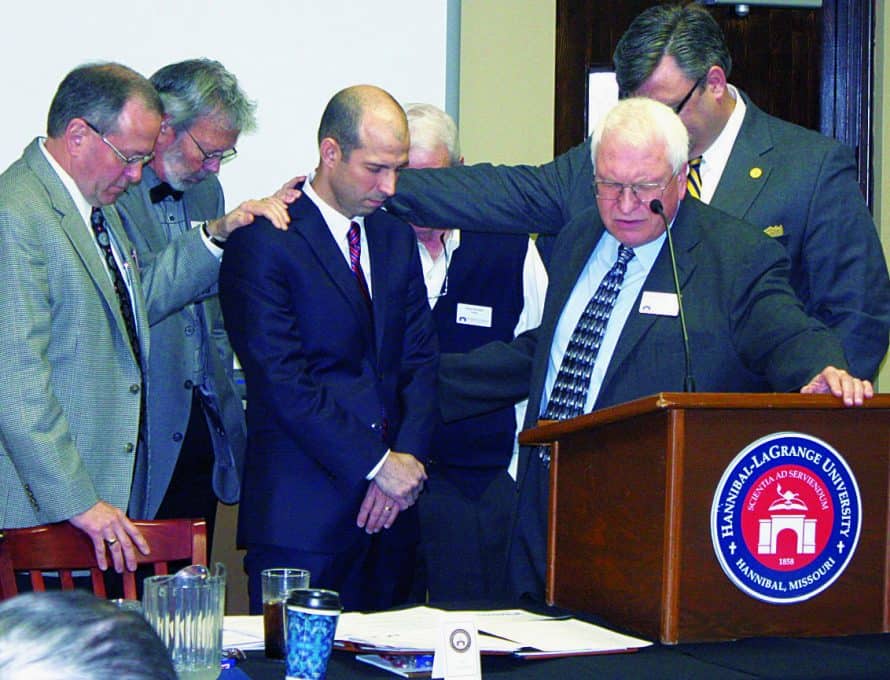 HANNIBAL – Trustees for Hannibal-LaGrange University (HLGU) approved a $23.18 million budget for the upcoming year and welcomed a new vice president to campus during their March 19-20 meetings on campus.

Trustees unanimously approved the hiring of Miles Mullin as vice president of academic affairs and dean of faculty. Mullin comes to HLGU from Southwestern Seminary’s Houston campus, where he served as associate professor of church history. He earned his bachelor’s degree from the University of Virginia, then studied at Southeastern Baptist Theological Seminary for an M.Div. before heading to Vanderbilt University for a second master’s degree and his Ph.D. His main area of expertise is American religious history, specifically the interplay between religion and culture. Along those lines, his primary research focuses on evangelical history, while maintaining a strong secondary interest in African American religious history, especially the Civil Rights era. He will also teach courses in religious history.

“After an extensive search, Miles was selected to lead our faculty,” President Anthony Allen said. “He is a good scholar, a dynamic teacher, and believes in our mission of integrating faith and learning in every discipline. I am confident the Dr. Mullin will continue to advance the mission of HLGU with both respect for our rich history and the ability to embrace change. Miles’ style of leadership is engaging and personal. He understands the importance of listening and looks forward to engaging the faculty and the University.”

The HLGU Board of Trustees unanimously bestowed the title of vice president emeritus of academic administration on David Pelletier. Pelletier, who has served in Hannibal since 1996, will assume the title during a time of transition as Mullin undertakes his new duties at HLGU June 1.

Trustees also approved the 2015-16 budget, totaling $23,181,448. This represents a 3.49 percent increase over the current budget, and reflects a seven percent increase in tuition and fees. It also includes a one percent pay raise for faculty and staff, with the potential for another one percent if certain financial goals are met.

Allen reported to the board that the school is seeking $450,000 in support for its still-under construction Science, Nursing and Allied Healthy building. That $450,000 will enable HLGU to qualify for a matching grant from the Mabee Foundation. Allen also reported that the new facility will be named after long-time donors to HLGU, the Carroll family.

Enrollment for the spring semester is 855, down 42 from in spring of 2014. Residential enrollment is 431. HLGU’s vice president for enrollment management and student services, Ray Summerlin, reported to trustees his office is focusing on increasing student retention to bolster those numbers.

Jeff Brown, dean of students, offered trustees a spiritual snapshot of campus. According to his survey data, 47 percent of women on campus are what he would call “strong believers” and 42 are nominal or young in their faith. The remaining that are not Christians he characterized as open to the gospel or seeking. As for the male population, the survey shows that three-quarters are strong believers and a quarter are nominal in their faith.