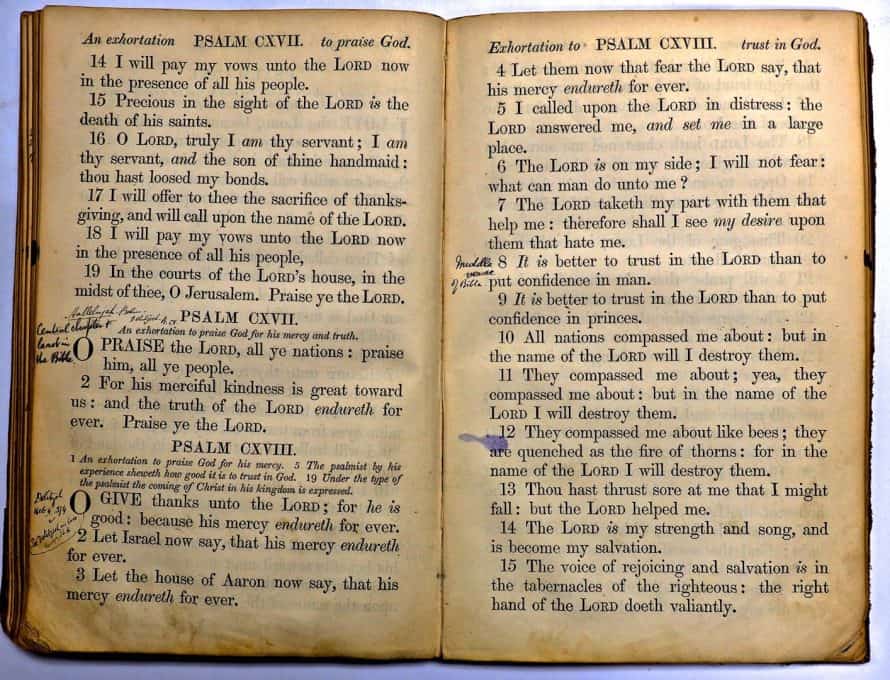 Scholars at Midwestern Baptist Theological Seminary have discovered, within the institution’s Spurgeon Library collection, a Psalter that 19th-century Baptist pastor Charles Spurgeon used in the compilation of his commentary on the book of Psalms, The Treasury of David.

“One of the purposes for the existence of the Spurgeon Library at Midwestern Seminary is to advance the gospel of Jesus Christ for the church and the academy by preserving the personal library of Charles Haddon Spurgeon and fostering a deeper appreciation of his life, legacy, theology, and preaching,” said Jason Allen, president of Midwestern Seminary. “It is, I believe, exhilarating and important to uncover such an artifact that Spurgeon personally used to create resources for fellow believers to study and better understand the book of Psalms.

“It is an evident blessing from God to allow for such a discovery, and we are grateful to Brian Albert for his dedication in combing, page-by-page, through Spurgeon’s library. It is our hope, that as we delve further into the collection in the season ahead, we will discover many more such artifacts that provide better insight into the life and ministry of Charles Spurgeon.”

In recent months, Albert – pastor of Calvary Baptist Church in Lenexa, Kan., who is also a research assistant at the Spurgeon Library – has dedicated one day a week to combing through the library’s books. His process includes reviewing a book twice, looking for notations, dates, and other pertinent data. He then attempts to trace the book to other sources of Spurgeon.

Upon his discovery of the Psalter, which was published in 1864, Albert brought the work to the attention of Christian George, curator of the Spurgeon Library and assistant professor of Historical Theology. George analyzed the book and concluded that much of the handwriting in its margins belongs to Spurgeon and that it was, in fact, a working Psalter that Spurgeon had used.

“This Psalter, which was used by Spurgeon in the formation of The Treasury of David, is just that – a treasure,” George said. “My hope is that it will propel Spurgeon scholarship forward by revealing not just the product of Spurgeon’s literary labors, but also the process.

“Every once in a while,” George continued, “you get a glimpse of what God has accomplished in the past. This Psalter, along with other works in our collection, gives us a window through which God illuminates his amazing work in the life and ministry of Charles Spurgeon.”

In proving its authenticity, Albert noted that the publication date of the Psalter not only fell within Spurgeon’s lifetime, but also limits the timeline. The date also corresponds with the writing of the Treasury of David (approximately 1865-1885). Each year (1804-1900), this particular Bible was printed by the British and Foreign Bible Society.

“There were hundreds printed annually so it would be easy access for the public to purchase,” Albert said. “This fact told me that the Spurgeon Bible was not an heirloom or family Bible, but was more ‘usable.’ The fact that this Bible was only on the Psalms also struck my curiosity as to the relationship with the Treasury of David.”

Albert also depended upon the publication’s notations and sources cited. Many of the notations in the Psalter were Spurgeon’s.

“What struck me as significant was not only the fact of Spurgeon’s notations, but the amount of them,” he said. “I began to suspect that this was a “working” Bible.

He added, “I noticed that many of the sources (of the more than 50 used) that were noted in the Bible were also in the Spurgeon collection. When I checked these cited sources, many of them (well over half) had personal notations of the specific Psalm passage. This indicated to me that at least Spurgeon’s personal books were used for the source material, which verified that this Bible was used by Spurgeon as a ‘working Bible.’”

Finally, putting all the pieces together, Albert was led to research The Treasury of David.

“When I began to correspond the text of Scripture with the notations in the Bible, next to the text with what appears in the Treasury of David, the data was conclusive,” Albert said. “This Bible belonged to Spurgeon, was noted by Spurgeon (in part) from much of Spurgeon’s personal books to help write the 20-year work Treasury of David.”

In an effort to further verify the authenticity of the annotations, George sent samples from the Psalter to Malcolm Yarnell – noted English Reformation scholar, Baptist theologian, and director of the Center for Theological Research at Southwestern Baptist Theological Seminary – for a forensic examination of the handwriting. Yarnell compared the samples against other known samples from Spurgeon’s middle- and late-period sermons, and his conclusions were that, of the six samples provided, four belonged to Spurgeon, and one “probably” belonged to him.

“This is an important find,” Yarnell said, “primarily because Charles Haddon Spurgeon remains the single most important preacher to have ever graced Baptist history.

“I look forward to hearing more about your discoveries in the archives at Midwestern Seminary and the implications they have for our understanding of how Spurgeon prepared his sermons and writings,” he added.

In 2006, Midwestern Seminary purchased the personal library of Charles Spurgeon, which contains approximately 6,000 books. Many of these books are heavily annotated with Spurgeon’s own handwriting and reveal his use of them in his ministry. The collection is currently being archived and analyzed before being transported to the “The Charles Spurgeon Center for Biblical Preaching,” which is currently under renovation but slated for completion in August.