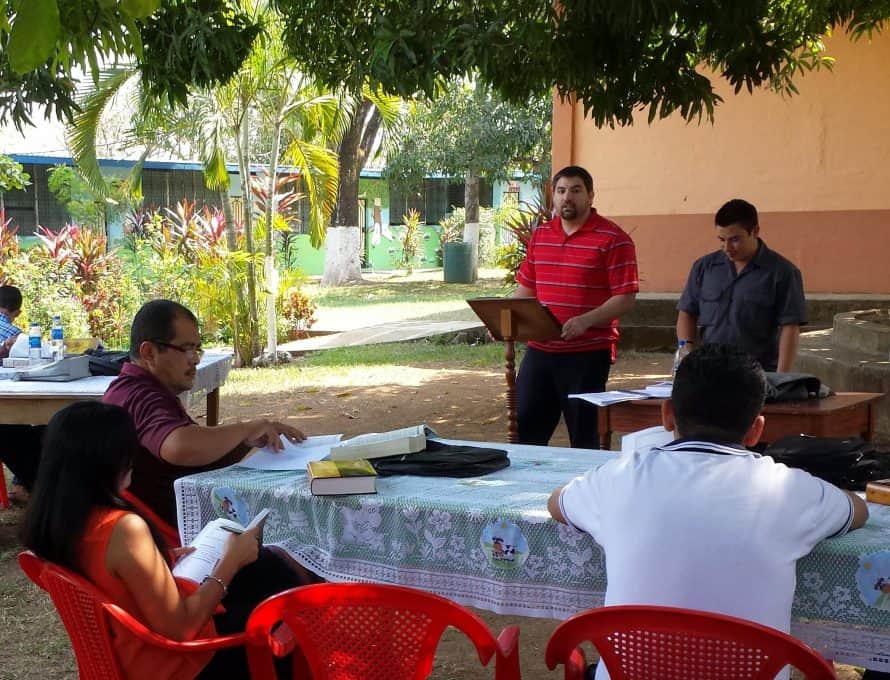 With the goal of gospel multiplication, six Missouri Baptists traveled to El Salvador, Feb. 9-15, in an effort to equip local pastors to lead Great Commission churches. According to John Vernon, DOM of the Cape Girardeau Association, this project continues a partnership established during the MBC’s three-year focus on El Salvador.

After landing in El Salvador, the team of six met briefly in the airport before splitting up into three sets of teaching pairs. The groups then separated and travelled to different locations across the country where they led pastors through curriculum similar to what students learn in seminary.

Vernon described the curriculum as “seminary in a box”. The Bible Training Centre for Pastors (BTCP) material consists of 10 different modules including biblical doctrine, Old Testament, New Testament, missions and evangelism, and preaching. The BTCP website explains that the “training consists of 520 hours of interactive classroom lecture and discussion under the supervision of a qualified teacher, taking about 2 years to complete.”

A total of more than 40 pastors received instruction. The long-term goal is for these pastors to plant and lead churches which will in turn plant and lead other churches. The team members also identified six men from the 40 who they believe have a particular gift for teaching. Those six received teaching assignments and will help to lead the cohorts when the team returns.

“We want these pastors to lead a growing church, see new churches start around them, and lead others to engage unreached people groups with them,” Vernon said. “Basically we are training them to embrace Acts 1:8.”

Vernon, who also served with the International Mission Board for fourteen years in Central Asia, noted that the mission strategy they are using is similar to the one he used on the mission field. The strategy is not merely to win converts, but to train leaders who will continue the work of the Great Commission.

“Like Paul with Timothy, the ultimate goal is to pick people up on the way and to send them to new areas. The Great Commission is for all people, and the task isn’t done until they are fulfilling it by going other places.”

The team plans to return to El Salvador towards the end of May to continue the training.

The post-game, midfield prayer of a high school football coach did not violate the First Amendment’s ban on government establishment of religion, the U.S. Supreme Court ruled in a 6-3 decision, June 27.