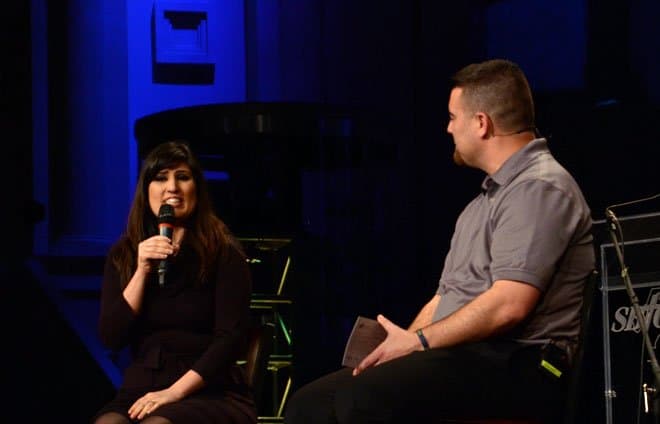 EULESS, Texas (BP) – Naghmeh Abedini, whose husband Saeed Abedini is imprisoned in an Iranian prison for sharing his Christian faith, expressed her passion — and her husband’s passion — for rescuing “that one sheep” with the Gospel during an evangelism conference, Feb. 23.

Naghmeh was one of the speakers at the Southern Baptists of Texas Convention’s Empower Conference at First Baptist Church (First Euless) in Euless, Texas.

During her message, she said the evening before she had joined a group from First Euless to share the Gospel at a handful of houses in the area. At one of the houses the group visited, a Muslim woman answered the door and told them her husband was at the mosque.

While some might assume the Muslim woman would not be interested in hearing about the Gospel, Naghmeh said the opposite was true.

“The Muslim was the most open person out of the five, six or seven houses we went to,” said Naghmeh, who converted to Christianity from Islam as a young girl and later served as a missionary to the Middle East. “There’s the harvest, but we’re not seeing it.”

She reminded conference attendees that Jesus did not say to pray for a harvest. The harvest is already there, she said. Instead, Jesus said to pray for laborers.

Naghmeh said Saeed has been a prolific witness for the Lord in the Iranian prison and has seen so many place their faith in Christ that officials have had to continually move him in hopes of keeping him quiet. Nothing they do or threaten, though, keeps Saeed from sharing the news that Naghmeh says changed her husband’s life.

“I’m proud of him,” Naghmeh said. “He knows that sharing the Gospel in the prison could cost him his life. In Iran the penalty of evangelism is death. Outside of his desire to see his babies and to see his wife and for his freedom, he desires that one more person would come to know Christ.

“As I was in the cold last night, I was thinking of all the things I have learned from Saeed and about the heart of God for that one sheep,” she said.

During the last two and a half years that Saeed has been imprisoned, Naghmeh has had numerous opportunities to meet with government officials around the world on behalf of her husband. On Jan. 21, she met with President Obama.

“I sat down with our president, and I just knew I had a few minutes to either beg him for Saeed’s release or to share God’s love, and I knew why I was there,” Naghmeh said, noting that she chose the latter.

Naghmeh acknowledged she fights fear and anxiety each day and sometimes cannot even get out of bed before spending several hours praying, reading Scripture and listening to worship music. She said sometimes that means waking up at 4 a.m. But through the days and weeks and years since her husband’s imprisonment, the Lord has upheld her and given her the peace to trust His hand, no matter the outcome. She said she has learned what it means to abide in Christ.

Evangelism is not as complicated or difficult as people think, Naghmeh said. She says it simply requires people who are convinced that Jesus is real, who realize their every breath is dependent on His existence, and those who love God and love others.

Naghmeh said she sees this kind of faith in her husband.

“I couldn’t be any more proud of my husband to be in the hands of radicals and still share, (even) knowing that this means he may never see our family again,” she said.

Naghmeh said she is grateful for others’ prayers to bring her husband home and to reunite her family.

However, even more valuable, she said, is seeing one lost sheep come to faith in Christ.