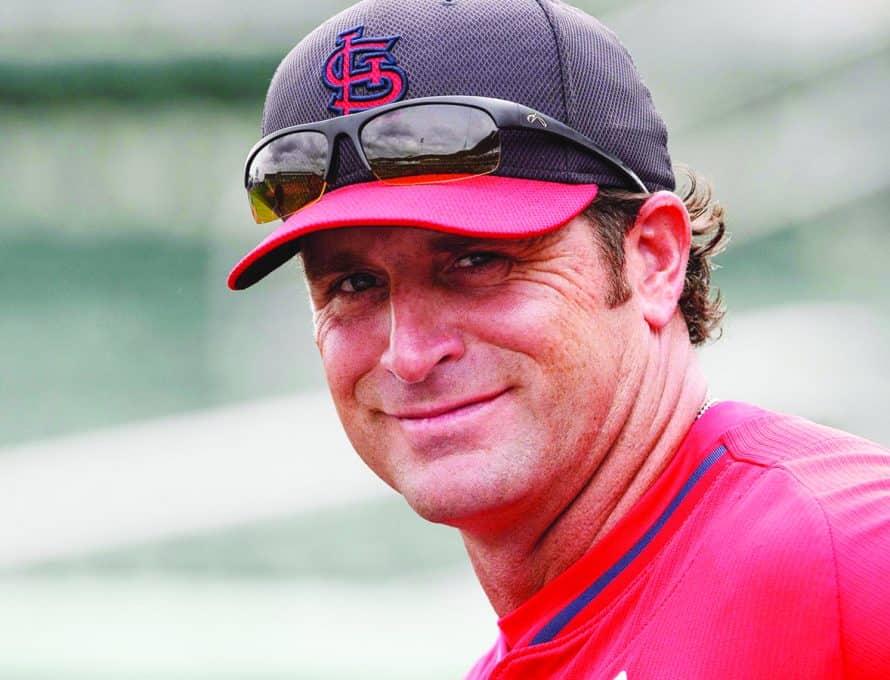 ST. LOUIS – Spring training is here and both Cardinals fans and Royals fans are eager to see warmer weather and Opening Day arrive. But until April (and hopefully two more post-season runs), consider tiding yourself over with this easy-to-digest but still interesting book by Cardinals skipper, Mike Matheny: The Matheny Manifesto.

If that name sounds familiar, it’s because it comes from a 2007 letter Matheny wrote to the parents of the little league team he managed. It went viral, with his no-nonsense approach to the game raising eyebrows and his commitment to building character in his players drawing applause. Working with Jerry B. Jenkins of Left Behind fame, the 44-year-old Matheny has expanded that original letter into “a young manager’s old-school views on success in sports and in life.” Most of the book is universal sportsmanship/leadership fare with Cardinal flavoring and Matheny’s utter confidence in what he is saying.  He doesn’t offer the secret to success here, just some tough love and common sense. There are plenty of fun anecdotes sprinkled among lessons like respecting the ump (even if he’s blind), seeking help when you need it, expressing thanks when you get it, working hard, having integrity etc. Then there’s chapter 10: “Stand Your Ground: Faith.”

It’s not uncommon for a public figure or athlete to talk about their faith in the very vaguest of terms, or only mention Jesus’ name after a game-winning touchdown or homerun. I think the cynic in all of us often sees this “spirituality” as merely paying lip service to the Christian market. But here Matheny goes beyond those standard, trite platitudes, way more than I expected. He opens the faith chapter as boldly as any Missouri Baptist preacher: “I am, without apology, a Christian. With that comes an obligation, a responsibility to live up to who I say I am – or, more precisely, Whose I say I am.”

He goes on to recount his testimony of finding saving grace in Jesus. He was born into a Christian home in Ohio, and considered himself “pretty religious.” When he was ten, his parents’ church held a tent revival meeting and hosted a Southern Baptist evangelist.

“Well, I thought this preacher was whacked out up there at the pulpit, pounding his Bible and making a lot more noise than I normally heard at church,” Matheny writes. “At least he got my attention. By that age I had memorized a lot of Bible verses and knew all the stories… But this guy began calling out us churchgoers, demanding to know, ‘Who is Jesus Christ to you?’”

After debating what the preacher said with his older brother in their bunk beds that night, Matheny recounts how he went to his parents late that night and asked how to be saved. I laughed as he described reluctantly creeping out to the living room, afraid he would be punished for being out of bed. Thankfully, they weren’t upset: “Immediately their faces lit up,” he writes. “They got out their Bible, opened it to the New Testament book of Romans, and walked me through its Road to Salvation.”

The fact that Matheny even mentions the Roman Road is noteworthy, but he goes on to list out the verses and explain them. This book includes a legitimate, Bible-based, evangelistic presentation of the gospel!

You might get a canned “Christian” response from a sports figure or celebrity, but how many will trot out the Roman Road and tell you about when they were saved? How many more will vocalize their commitment to sharing their faith in the clubhouse, and confess his ongoing quest to be the one manager in big leagues who will argue with an ump without cussing, so as not to damage his witness? Matheny makes it clear “who Jesus is” to him.

I was not a baseball fan growing up, so when I had the opportunity to meet an interview Matheny for a Pathway story eight or nine years ago I was not star struck in the slightest by the former Cards catcher (whose name I mispronounced). He was quiet, humble and straightforward. It wasn’t until a few years later when I caught the baseball bug from my wife (and Matheny was named the new St. Louis manager) that I realized how neat that experience of hearing his testimony firsthand had been. Matheny’s genuine commitment to Christ stood out then, and it stands out now.