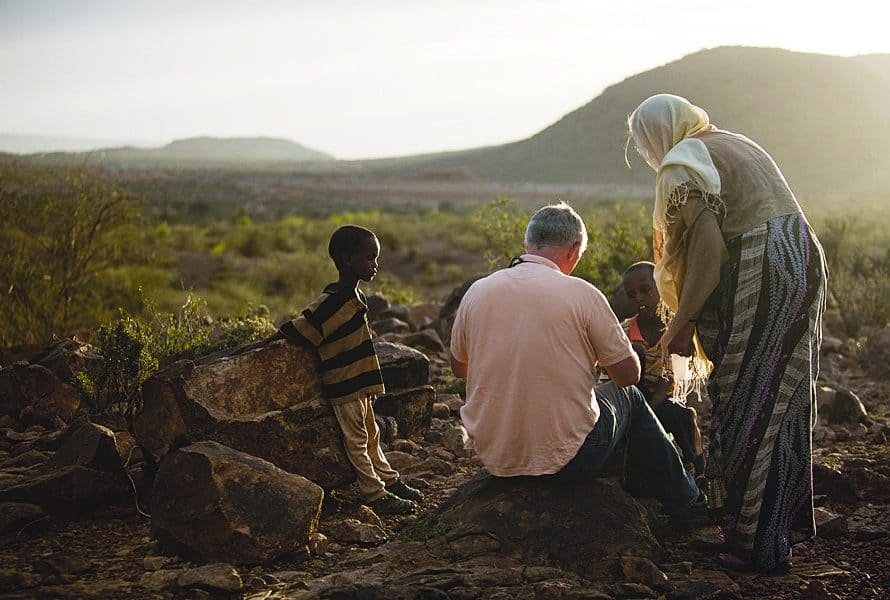 NORTHERN AFRICA AND THE MIDDLE EAST – Nik and Ruth Ripken (names changed) help a Somali shepherd boy fix a broken shoelace. “We need to pray that the peoples of the earth will have access to Jesus,” Nik says. “The most persecuted person is a lost person who has no access to Jesus.” (BP photo)

Dietrich Bonhoeffer saw this is as a weakness of American Christianity. Because Americans had never been forced to stay put when religious persecution arose (they had always had the option to flee), they had never developed a theology of persecution. This was not the case in Germany and other parts of the world where Christians could not simply flee from persecution but had to stay, endure, and develop an understanding of how persecution related to being a follower of Christ. This in turn had led to the development of a dangerous belief among American Christians, namely, that Christians weren’t supposed to endure persecution.

But a new day is dawning in America. Two unavoidable facts of history are going to dramatically change the American Christian experience. The first is, there is nowhere left to run. There are no “empty” places left in America (or anywhere else on the planet for that matter, unless you want to live in the uninhabitable polar regions) for Christians to flee to in order to avoid persecution. The days of fleeing instead and staying and facing persecution are over.

The second fact is, the culture is turning against Christianity. Although America hasn’t been nearly as Christian as some would like to argue or believe, there is no denying that few nations in history have been as open and friendly to Christianity as America. That is changing. Christianity is losing its favored position in America and is increasingly being viewed with hostility and opposition by those in power.

I think most of us in America understand this, but what we don’t seem to understand or want to accept is that God’s hand is in this. Our reaction is to circle the wagons, petition the government, change the laws, and win elections to bring back the America of Ronald Reagan or Dwight Eisenhower. The reality is, that’s not going to happen.

Now I’m not saying we should meekly submit to having our freedoms taken away. I believe we have a responsibility to ourselves and more importantly to our children and grandchildren to defend our freedoms, but the American church must see that the ultimate guarantor of our freedom is not the U.S. Constitution or the Bill of Rights. No the ultimate guarantor of our freedom is Jesus Christ. And our ultimate freedom is not religious freedom or freedom of speech.  Our ultimate freedom is freedom from sin, self, and death. We must learn to put our hope not in a 200+ year old, man-made document, but in a 2000+ year old, God-made cross.

This then raises a question, “Should we pray to be spared from persecution or for persecution to stop?” I think it’s always a good idea when we have a question to look to scripture. What did the early church do when it came under persecution? How did they pray? The first record that we have of persecution against the church is found in Acts 4. Peter and John had healed a crippled man in the name of Jesus and then had the Jewish leadership command them to no longer speak or teach in Jesus’ name under threats of punishment if they did.

When these words were reported back to the church they immediately went into prayer. Here is what they prayed, “Lord, look upon their threats and grant to your servants to continue to speak your word with all boldness” (Acts 4:29). They did not pray to be spared from persecution. They did not pray for the persecution to stop. No, they prayed for God to grant them boldness to continue in the face of persecution. They understood that persecution came with the territory, that it was unavoidable. They knew that they needed strength to endure.

Nik Ripken in his book, The Insanity of God, writes,

We seem to forget that Jesus Himself promised that the world would reject and mistreat His faithful followers just as it rejected Him. Could it be that the only way that Almighty God could actually answer prayers asking Him to end the persecution of believers… would be to stop people from accepting