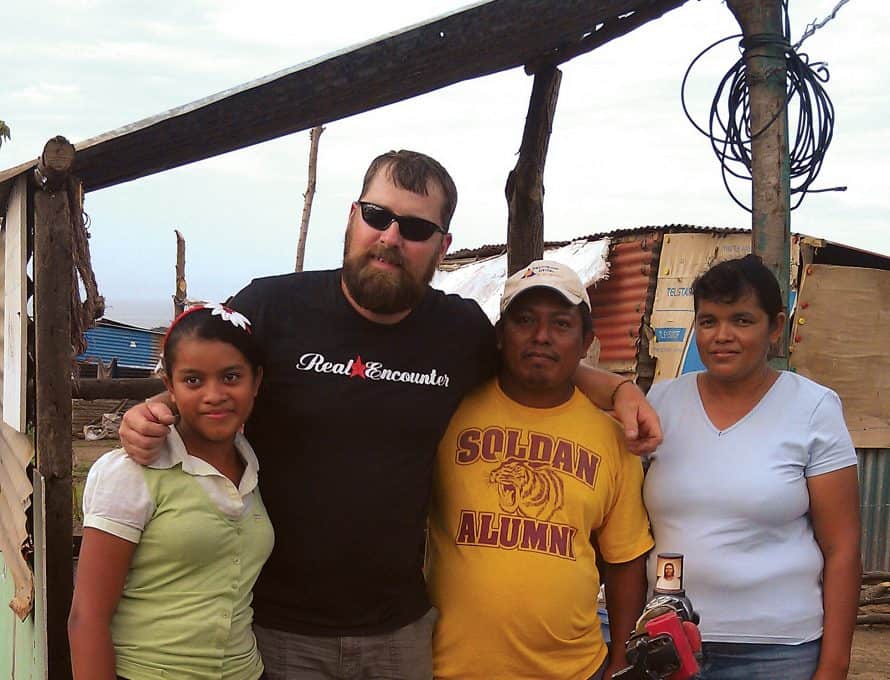 SPRINGFIELD – Eric Hertzler’s aha moment came on the mission field in Nicaragua in 2012 after he restored the brakes on a boy’s bicycle, making him so happy that he pedaled thirty feet and did a power slide, showing Hertzler a giant smile.

Hertzler, who attends Ridgecrest Baptist Church and went on that mission trip with Real Encounter (an action sports ministry) and a couple of BMX riders, returned to Nicaragua in July with Real Encounter and Joey Hill (a BMX rider), equipped with more tools this time so he could fix more bicycles.

The team attended a soccer tournament, where they conducted BMX and motorcycle shows – all of which draw big crowds. And since many spectators arrive on bicycles as their primary means of transportation, Hertzler was there to offer repairs at the bike stand he set up.

According to the CIA, Nicaragua is the poorest country in Central America and the second poorest in the Western Hemisphere. As such, Hertzler says he has heard that only one percent of the population drives automobiles. Everybody else is either on foot or bicycle. And many cannot afford to buy new bicycles, so they buy them second or third hand, which means they are in need of constant repair.

Hertzler, who works at the Sunshine Bike Shop in Springfield, was moved by the poverty he witnessed.

“I would see whole families on a single bike,” he said. “The dad would be pedaling the bike. The mother would sit sideways on the crossbar in front of him. And then you’d see two kids on the back of the bike on pegs that stick out from each side. I’ve never seen anything like it.”

For two straight days, he worked with a native bicycle repair shop owner named Renaldo, restoring some twenty bicycles so they would be safe to use again.

“The total of bikes that we fixed was really low, compared to my expectations, but they were so labor intensive that each bike required probably forty-five minutes to an hour of work,” Hertzler said.

“When I got them into my bike stand, everything was wrong with them. Nothing worked right. I didn’t want to just fix one thing and send them down the road. I really wanted to make a difference in the bike and that also gave me time to discuss the gospel with them, which I had never done before.”

Hertzler, who was speaking through interpreters and is a relatively new believer, said sharing his faith there on the mission field was awkward at first, but he found the people to be receptive. None of them left without knowing the real reason he was there—the Lord had sent him because God wants them to know Him personally.

Because peer pressure was a possible hindrance, Hertzler felt compelled to pull a couple of children aside to talk to them about Christ. One such boy appeared to be the ring leader of other children and Hertzler knew the boy could be influential if he came to the faith. He asked him if he knew Jesus.

“He said that he really didn’t, but that his mother and his grandmother did,” Hertzler recalled. “And he told this story about how the Lord had told them to sell their farm, which is no small thing there. They sold the farm and things were unstable for them for a while, but in the end they were able to buy a bigger farm.

“He said that when his mother and grandmother would pray sometimes, they would cry and he didn’t know why. I explained to him about the Holy Spirit.”

Hertzler wanted to encourage the boy further, so he gave him a Spanish Bible.

“While he didn’t come to Christ right then, I can’t help but think that he was on the verge,” Hertzler said. “He just didn’t [fully] understand yet. I’m praying that he has come to Christ by now.”

Hertzler is also praying about returning to Nicaragua. He’s collecting bicycle parts in anticipation of his return. But he wants to go a step further in his ministry opportunity this time.

He isn’t sure what this will look like necessarily, but he’s thinking he might set up a class in which participants would receive a certificate and some tools once they successfully complete the training which will give them everything they need to begin their new business.

“The gospel would be intertwined with that,” Hertzler said. “It’s a great opportunity to draw people and to build some sort of relationship with them. In talking to missionaries there and locals, there are a lot of missionaries who come down just for a week and then leave, so there’s not ever really a relationship established. This might be a way to establish relationships.”

Hertzler would make return visits to follow up with the people he trains.

“I’ve asked the Lord to make the path straight if this is what he wants me to do,” Hertzler said, “and everything just keeps falling into place.”

If you would like to donate tools or bicycle parts for the cause, you can email Hertzler at erichertzler@yahoo.com.