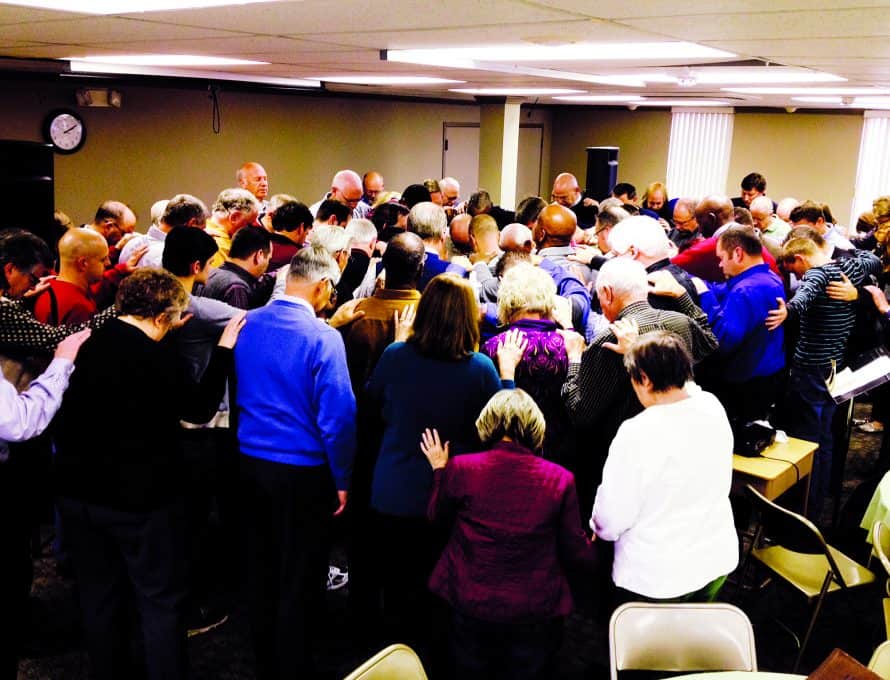 FERGUSON – As snowflakes swirled outside and rumors of potential grand jury actions swirled across town, a hundred Missouri Baptists gathered for a prayer summit at First Baptist here to pray for the community, the state and the nation.

The prayer time was led by North American Mission Board’s Gary Frost and Arkansas pastor Bill Elliff. They led the crowd in a time of repentance, worship and intercession for themselves, and revival in their churches, their communities and beyond. They also prayed specifically for local St. Louis pastors. Much attention is focused on the St. Louis area in anticipation of the grand jury’s decision whether or not to indict white Ferguson police officer Darren Wilson, who shot and killed Michael Brown, a black 18-year-old Aug. 9. In the days after the shooting, Ferguson made international headlines with protests, rioting, and the police response amid cries of racism.

“You know all the stuff that has been going on in North County St. Louis,” said Jim Breeden, director of mission for St. Louis Metro Baptist Association. “We need and will take all the prayers we can get. But it’s not really about North County or about race relations; it’s really about God’s people humbling themselves and coming before the Lord.”

Frost and Elliff moved the focus toward the Church’s need for revival.

“Revival is the extraordinary work of the Spirit of God among His people that produces extraordinary results,” Elliff said. “God is moving all the time, but in revival, there are these moments when God chooses to rend the heavens and bring His kingdom in a church, a nation and a life. But our faith is weak and our prayer is small. We can’t fathom what it would be like for God to bring real revival. But God has done that and He can do it again. Prayer is the foundation of revival.”

Frost addressed Ferguson specifically in his remarks, comparing negativity in the community to negativity in Nehemiah’s day as he rebuilt Jerusalem’s wall.

“There are people poised for destruction and hoping all literal hell breaks loose,” Frost said. “That’s the atmosphere we’re dealing with. But it’s not a matter of policing. Only God can heal and thwart the tactics of the Enemy. We need to pray that God would thwart the plans of all the agendas that have shown up here for the purposes of advancing any person and not the glory of God.”