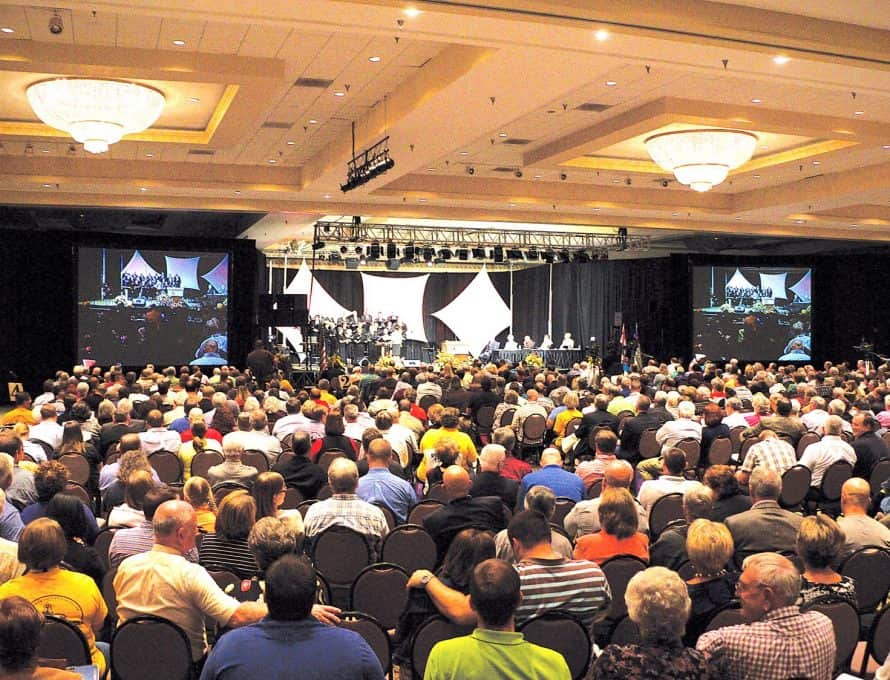 OSAGE BEACH – Reminded that they can do more through cooperative ministry empowered by the Holy Spirit than they could ever do alone, Missouri Baptist Convention (MBC) messengers stood together during their 180th annual meeting here, Oct. 27-29, to defend the biblical view of marriage and oppose the modern-day slavery of sex-trafficking.

A total of 937 messengers and 269 guests from 390 churches gathered at Osage Beach’s lakeside Tan-Tar-A Resort, where MBC Executive Director John Yeats urged them to reject the “cultural religion of humanitarian goodness and political correctness.” Rather, they must depend completely on the Spirit of God as they “stand up compassionately for our biblical convictions in the public square.”

MBC messengers did just that during the annual meeting by unanimously adopting two resolutions supporting their biblical convictions. In one resolution, they promoted the biblical view of marriage by challenging Missouri Attorney General Chris Koster to defend the state constitution’s ban on same-sex marriage. In another resolution, messengers denounced sex trafficking, calling upon Missouri Baptists to “join in the active battle against the modern-day enslavement of humans for commercial sexual exploitation.”

Yeats also used his address to introduce one of two brand new resources to help pastors equip their churches. “Where the CP begins” is a video about a man who starts his day praying for his family, his local church and for state and national ministries. The other video, shown on Tuesday, depicted an artist using low-tech methods to emphasize the CP message. Both videos are available at www.mobaptist.org/cp.

“This is our fourth MBC annual meeting,” Yeats said. “I’m convinced that, with each year, we are gaining traction for making Kingdom advance. It is imperative we move forward in the power of the Holy Spirit.”

During the annual meeting, MBC president Wesley Hammond, pastor of First Baptist, Paris, emphasized the theme of this year’s annual meeting, “Together,” declaring that “the days of working alone as Missouri Baptists needs to end.” Convention preacher Richie Rhea, pastor of First Baptist Church, Troy, urged Missouri Baptist church leaders to follow the example of David in Psalm 103 by preaching God’s Word to their own souls before preaching to others. Additionally, Golden Gate Baptist Theological Seminary President Jeff Iorg equipped Missouri Baptists for leadership and challenged them to stay true to the mission that God has given them.

At Tan-Tar-A, Missouri Baptists also decided to hold its CP budget at $14.5 million for the second year in a row, although they also decided to move toward the “50-50” cooperative giving plan. This budget set aside five percent of the total CP giving for the “shared expenses” category, which will be allocated for annuity protections and The Pathway. The remaining balance will then be split, with 59.5 percent of the CP budget going toward state ministries and 40.5 percent going toward SBC ministries. In contrast, messengers at the MBC’s 2013 annual meeting allocated 60 percent for MBC causes and 40 percent for SBC causes.

Missouri Baptists also approved the Executive Board’s recommendation that the Rheubin L. South Mission Offering goal be set at $700,000 and that the MBC take a special offering on Oct. 28, 2014, to “benefit scholarships for mb125 and Minister’s Juggling Act and other pastor-assist initiatives,” on the one hand, and a “Disaster Relief Endowment Fund,” on the other hand. The total offering of $5,527.96 will be divided 60 percent/40 percent, respectively.

Missouri Baptists also approved a recommendation by the Committee on Convention Preacher that Robert Shelton, pastor of First Baptist Church, Plattsburg, preach the convention sermon during the next annual meeting at the University Plaza Hotel and Expo Center in Springfield, Oct. 26-28, 2015.