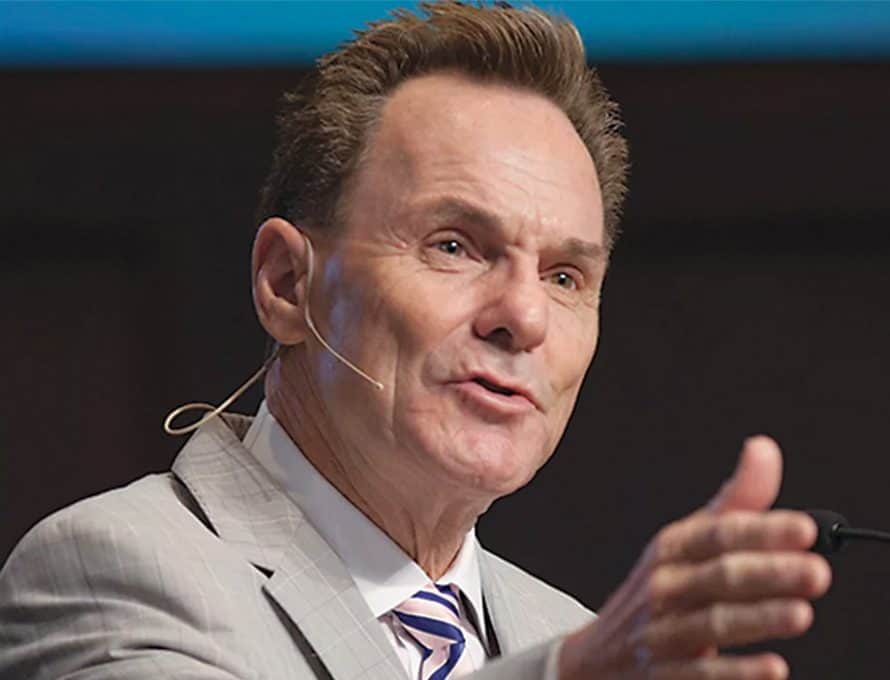 KANSAS CITY – During a chapel service and prayer summit held at Midwestern Seminary on Aug. 27, the president of the Southern Baptist Convention (SBC) emphasized the need for “extraordinary prayer” in expectancy of the next great movement of God in America.

Ronnie Floyd, who was elected to the SBC’s top position on June 10, also provided seminary students, faculty, staff and friends insight into his role as president and his vision for the convention during the morning’s chapel service.

“It is a great privilege for Midwestern Seminary to host our convention’s President, Dr. Ronnie Floyd, for this time of contemplation upon prayer and its affects toward a great movement of God,” said Jason Allen, Midwestern Seminary’s president. “The convention president does many things, but if God has placed Dr. Floyd here to bring together this convention – young and old, each generation, different styles and different theological backgrounds – toward a passion and zeal for a Great Awakening, and if that can be channeled into a new ambition to reach the world for Christ, then we all will say, ‘Well done, good and faithful servant.’”

In an event coined the “Regional Prayer Summit for the next Great Awakening,” Allen interviewed Floyd on the importance of prayer toward a great movement of God and then the floor was opened to questions from those in attendance.

Responding to Allen’s question about what has led to the passion he possesses for an awakening and why now is the time, Floyd said it stemmed from 1971 and 1972 when he was saved and baptized. There was a great movement of God called the “Jesus Movement,” where large numbers of youth across America gathered for prayer and worship. He said that event and season in his life has stuck with him to this day. He noted another time of God’s moving in the mid-1990s to the early 2000s. Each time, however, the church didn’t accept these movements. But Floyd has sensed a new urgency in the matter over the past 12-to-18 months.

“There is a growing sense of desperation,” Floyd said. “There is a growing belief within our churches, and among many of my peers, that they know there is no way we are ever going to reach the lost and unreached peoples of the world without a great movement of God in America, especially within the church and within our lives.

Allen also asked Floyd to contemplate what it might mean for Southern Baptists to be the ones used by God to initiate a great revival within America.

Floyd responded that the times when God has made his greatest moves are when things appear to us to be at their worst. These times can leave many feeling downcast, but he feels differently.

“To me, it’s all about hope, and it’s about the fact that God is up to something,” Floyd said. “You put that together with a passion for extraordinary prayer, the belief that God is really up to something, and the conviction of the urgency that ‘This must be done,’ and there is good reason to be excited about the direction God is leading the Southern Baptist Convention.”

As Floyd had been using the term “extraordinary prayer,” one local pastor asked for a definition of this idea to provide clarity. Floyd responded saying it included repentance of sin, surrendering to the Lordship of Christ, for the revival of individuals within the church and to reach the world for Christ. He encouraged the group to dedicate 5-10 minutes of their prayer time daily to ask God for a Great Awakening.

The summit concluded with a dedicated time of prayer for Midwestern Seminary, the leaders and churches of the SBC, missionaries, and for the spreading of the gospel locally and around the globe.

In his message entitled, “What I see for the SBC,” Floyd noted that what he was speaking about “today” (Aug. 27) is what he sees for the SBC at this particular time. This vision includes that the SBC is in a critical season of decision and opportunity, citing Romans 13:11 and 1 Chronicles 12:32.

“As Southern Baptists, we are living in a ‘God moment,’” Floyd said. “We are living in a critical season of time. We are living in a decisive and opportunistic moment. This is a new day and age, and we need to know the strategies, uniqueness, and the actions that we need to do now, so we can be in touch with this crucial moment in human history. Paul would tell you that you better live like the Lord could come today. Because of this moment, it literally shapes everything in my thinking, and it should shape your ministry and your future. You don’t know what tomorrow holds…but today is your day. You better do the work of the Lord today.”

Floyd noted that as a result of this “kairos,” or defining moment, the Southern Baptist Convention must lead the way in calling for and praying for the next Great Awakening in America. He said an “extraordinary season of prayer” by God’s people is what’s necessary for this to occur.

He added that there hasn’t been a great movement of God in over 100 years, but there has been one factor that led to such awakenings. “I am convinced, biblically and historically, that no great movement of God ever occurs that is not first preceded by the extraordinary prayer of God’s people,” he said, stressing that this effort is one Southern Baptists should undertake together in praying daily for a Great Awakening in the United States and for the world to be reached for Jesus Christ.

The SBC president’s vision also included that the convention must come together with all of its resources to reach the world for Christ.

“People are lost everywhere,” he said. “It’s important to reach them everywhere, but we can’t forget our own nation. We cannot lose America, and we don’t want to lose any part of America. We must return to a prioritization of personal evangelism in our towns and in our churches.”

Floyd closed by sharing how he tells his six grandchildren, “You can change the world, and you are going to change the world,” every time he sees them.  He feels the same toward the people of the SBC.

“We had better start believing again that God has saved us to change the world,” Floyd said. “If I don’t believe the gospel can change the world and change lives and wake up churches, then I need to go do something else. But I believe it!”