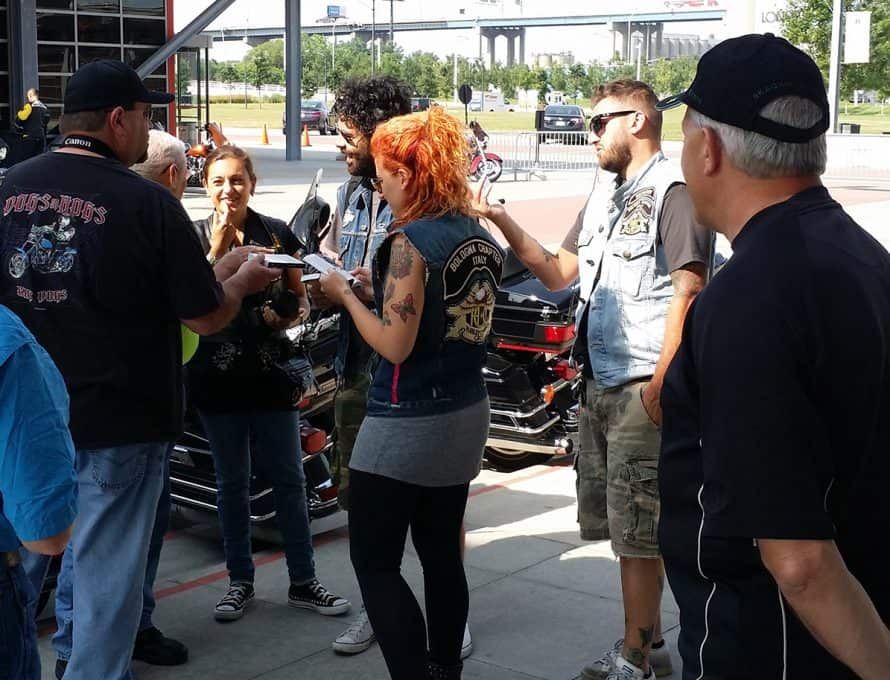 MILWAUKEE, Wis. – Five men from the Missouri Baptist Bikers Fellowship (MBBF) struck up a conversation with a former pastor at a motel in Canada recently. The former pastor was newly married to an unbeliever, but open to a spiritual conversation.

“We had the opportunity to have a rather lengthy conversation with him about his background and experience and frustration with church, and my heart really went out to him,” said Randy Shipman, pastor, FBC Clinton. “I kept wondering, ‘How do you get here?’ and I don’t know the answer to that question, but he was struggling and very open to conversation.”

The former pastor, who isn’t a Baptist, willingly took a Biker Bible even though he said he already had many Bibles. He thought his wife might read this particular one.

This was just one of many one-on-one conversations MBBF had with strangers on its “Spy out the Land” motorcycle tour of the I-29 corridor for the Heartland Interstate Strategy (HIS) task force that wants to see reproducing churches planted up and down the 800-mile stretch of interstate that is largely lacking in Southern Baptist and evangelical witness.

Schildknecht estimated that they handed out 50 Bibles – all of which were provided by the Cooperative Program.

“Each Bible represents a connection, a contact with someone,” he said.

One such connection came after a rainstorm forced them off the road near Winnipeg. They pulled into a convenience store for refuge and two other bikers, who were much younger and riding different kinds of bikes from the Harley-Davidson’s that MBBF was riding, pulled in behind them. Schildknecht says the two cultures don’t ordinarily make easy connections, but this time they did.

“They approached me before I approached them and we engaged in conversation,” Schildknecht said. Shipman handed both bikers a Bible. “And they seemed truly appreciative of receiving the Bibles. They had never seen anything like that before. We encouraged them and told them we would be praying for them and their safety on the wet highways.

“We never saw them after that, but that was a standout moment for me. It was just one of those divine moments in which we ran into a rain cloud and all of us had to get off the highway at the same time. If it had been a sunny day, we probably never would have connected.”

The encounter didn’t lead to conversions, but MBBF was able to plant the first gospel seed these two young bikers had probably ever received, painting a picture for prospective church planters who might be interested in mining the upper Midwest for souls. The work will be long and difficult. Part of that difficulty is already noticeable in the existing pastors and church planters in the area who don’t have a lot of help.

“The farther north we went, the lonelier the church planters seemed to be – primarily due to a lack of other Baptist churches or workers,” Noyes said. “It’s really lonely out there for them, and it’s not for a lack of people, but rather a lack of Christian fellowship and a sense of brotherhood.”

MBBF gathered around and prayed for each planter it met along the journey. As they did so for one planter in Canada, he was moved emotionally.

“I’m confident it’s because that doesn’t happen often for him,” Noyes said. “And I’m pretty confident that it’s reflective of our planters and workers north of Missouri.”

MBBF says the I-29 corridor needs partnering churches to get involved with boots on the ground. Of course, it needs finances, but many of these startup works are small and they need established churches from the south to travel up the corridor to help with outreach, encouragement and any number of projects.

“In the past we’ve always sent money to missionaries, but I get the feeling that we need to overwhelm the north with our presence – not just sending money, but going and connecting with people, and helping to encourage those who are there doing the work,” Hall said. “Here’s a place that’s not that far – we don’t have to buy plane tickets overseas or worry about safety.”

When Hall, and the rest of the MBBF group, refers to overwhelming the north, they are talking about doing so strategically. They advocate churches in the south working directly with state leaders and church planters on the ground in the north to determine how many people are needed. Often these small plants only need a few people.

For example, Shipman says he talked to Jonathan Land, a church planter in Sioux Falls, and he told Shipman that he needs 18 people for one week.

“Lots and lots and lots of small groups just penetrating that area could make a significant difference,” Shipman said.

MBBF will be filing a report with HIS shortly to explain what they saw, but Noyes summed it up nicely: “We spied out the land, there are giants, but they can be slain, and it’s a land flowing with milk and honey.”

If you want to read more about MBBF’s trip, you can visit mbbf-mbc.org.