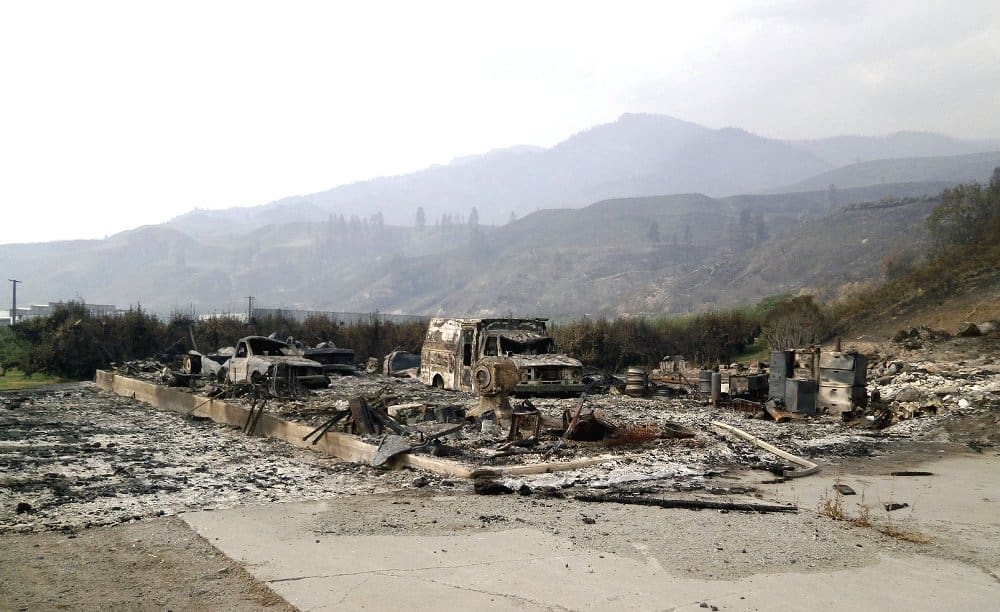 CHELAN, Wash. – Gerry Roe can’t help but wipe away a tear when she thinks about it. An older gentleman limped on two crutches into an American Red Cross (ARC) feeding station servicing fire survivors at a senior center in Twisp, Wash. Though Roe was told later he was partially paralyzed, he wasn’t looking for food for himself. He wanted to take the meals provided by Southern Baptist Disaster Relief (SBDR) volunteers to others in the community in need after fires in eastern Washington state destroyed more than 150 homes and caused the evacuation of another 1,200 residents.

“He came in on crutches, but he was there to help others,” said Roe, a member of Trinity Baptist Church in Springfield, Ore., who was serving on the SBDR unit that provided the meals.

Roe and a team of more than 20 Northwest Baptist Convention volunteers were preparing food for fire survivors. Southern Baptists have been providing meals-about 1,200 a day-since Monday. More than 1,500 fire fighters and support staff are now battling the blaze, called the Carlton Complex Fire, which started on July 14 as four separate fires. The Carlton Complex Fire, now the largest in Washington state history, has burned more than 400 square miles of the state, according to reports by USA Today.

“Some of the people may not have had their homes destroyed, but they had their power and water go out,” Roe said. “One grandmother with five grandchildren came in [to where Southern Baptist-prepared meals were being served]. We asked her how she fared and she told us that she had a nursery business and without power they weren’t able to cool it. They lost thousands of dollars of inventory.”

Rain on Wednesday provided hope for containment but also raised fears of additional lightning strikes that could spread the fire. The rain brought with it flash-flood warnings, which can complicate fire-fighting efforts.

Southern Baptist volunteers prepared meals at Chelan High School in Chelan, Wash., and then some volunteers traveled with ARC volunteers into impacted areas to distribute them. SBDR chaplains provided a listening ear for survivors and shared the hope of the gospel when given the opportunity.

“They’re scared,” said James F. Vines, an SBDR chaplain from Richland Baptist Church in Richland, Wash. “They’re uncertain about what’s going to happen and anxious to get into their homes because not only have their homes been destroyed but all the power and everything in the area is gone. So they’re really concerned. But they just want someone to talk to, so we just listen to them. It’s amazing how relaxed some of them get when they have someone to talk to.”

Gary Floyd, the Northwest Baptist Convention Disaster Relief director, expects increased ministry opportunities in the days to come as Southern Baptists help with cleanup work in the impacted area. At that point, he says, there could be opportunities for help by other state conventions.

“That’s one of the things our chaplains are doing right now,” Floyd said. “They’re out and about talking to people getting a feel for how things are in process. They’re also looking for ways we can help people right away related to their homes.”

“I hope people [impacted by the fire] will see that there is a God who loves them and cares about them,” Floyd said. “I hope they can see that God’s love can reach them even in the midst of crisis.”

Floyd also notes that the impacted region of Washington has been a place in need of new churches. He asks Southern Baptists to pray that God would call people just learning about the region through the news of the fires to move there to plant churches.

The North American Mission Board coordinates and manages Southern Baptist responses to major disasters through partnerships with 42 state Baptist conventions, most of which have their own state Disaster Relief ministries.