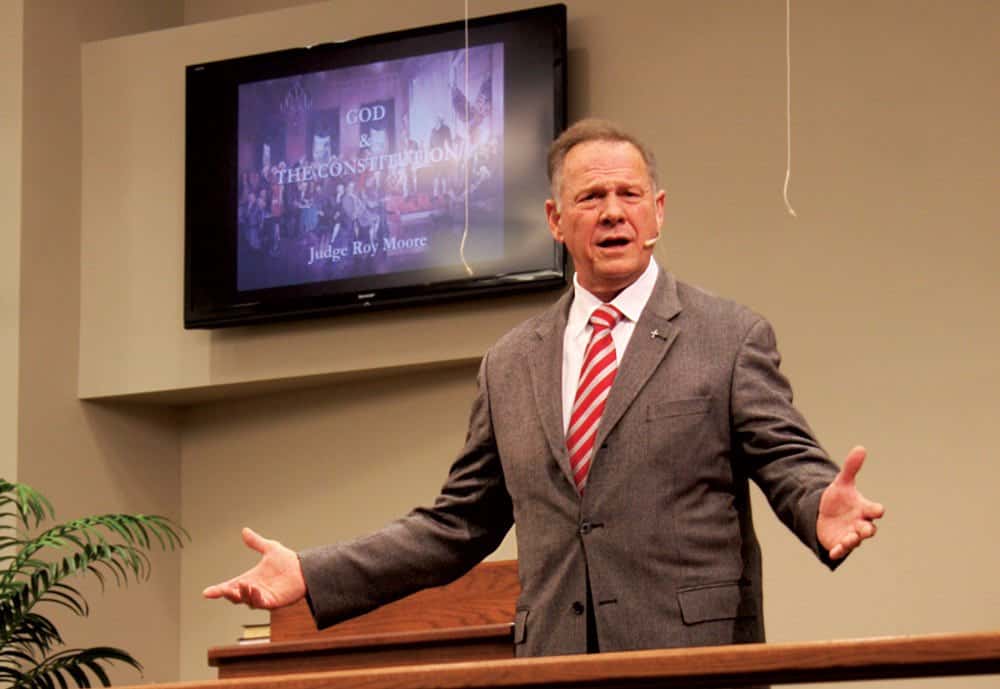 Moore is best known for his refusal to remove a monument of The Ten Commandments from the Alabama Supreme Court grounds, saying it was the foundation of American law and rejecting critics’ claims it violated the first amendment of the U.S. Constitution. Though he was removed from office in 2003 because of his refusals, voters elected him as chief justice again in 2012 where he still serves.

Yet Moore did not spend his time recounting the legal wrangling over the Ten Commandments. He instead defended the U.S. Constitution and argued there’s a difference between “religion” and “God” in the eyes of the law.

Moore said the Constitution does not say to separate God and government.

“God is the author of government,” he said. “He’s the one who separated religion and government in the first place, selecting the priests from the tribe of Levi and the kings from the tribe of Judah. He ordained the both. Nothing separated Him from either jurisdiction and nothing separates Him today except Man’s desire to reduce God to the church.”

He likened the moral decline of America to Israel asking Samuel to anoint a king as they rejected the authority of God, so they could be like all other nations.

“The founding fathers knew what we’ve forgotten, that America could not be like all other nations,” he said. “The founding fathers wanted to be different in acknowledging the sovereignty of God. Without God, there would never have been a United States of America. That is justified by every ounce of our history.”

Moore rejects the idea that the framers of the American experiment were all deists, showing they had an intimate knowledge of Scripture with certain phrases woven into the Constitution and Declaration of Independents.

“What they did with the Declaration of Independence was restore the sovereignty to the Creator,” he said. They knew the Bible quite well.”

Moore said Christians must not stand idly by when the Constitution – which protects rights granted by God – is attacked by those attempting to crowd God out of the public square, who say America has evolved beyond such things.

“To those Christians that think we should just stay on our knees, I don’t think that’s what God would have us to do,” he said. “We need to stand up and be able to say ‘I’ve fought a good fight’ and ‘kept the faith.’”