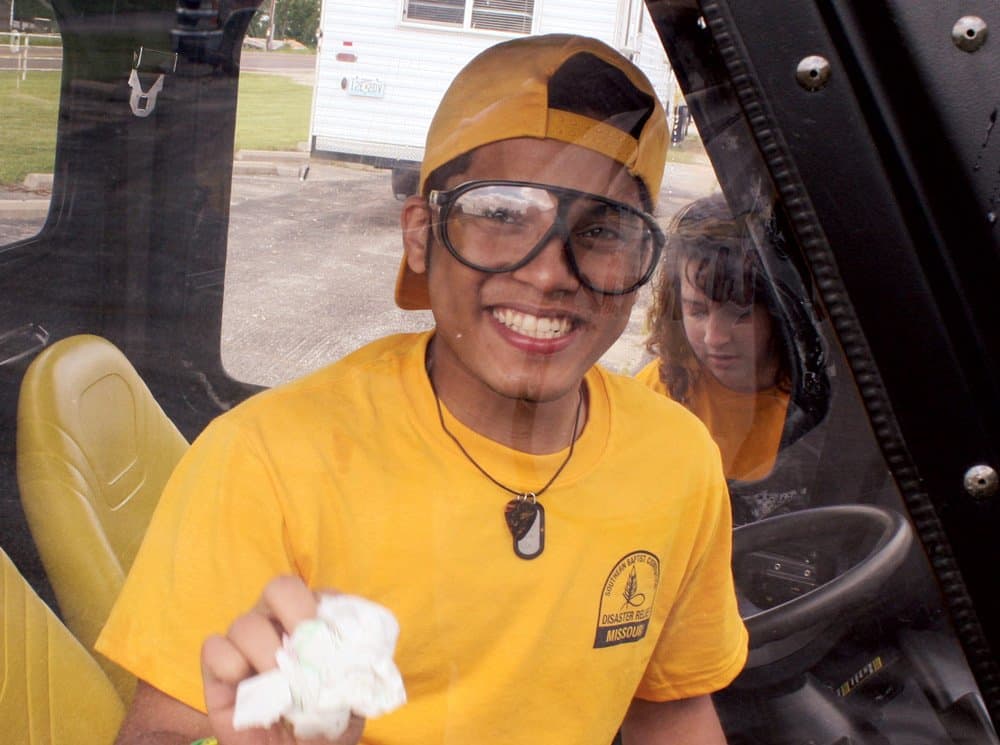 JEFFERSON CITY – Some younger faces are going to be showing up if disaster hits Missouri this summer. Six students are part of a new Disaster Relief (DR) pilot project between the North American Mission Board (NAMB) and three state conventions, including the Missouri Baptist Convention (MBC).

“The idea is three-fold,” said Joe Banderman, the point man for the Missouri student team. “The first is bringing awareness to the next generation that Disaster Relief is for all.”

The second is to bring in some fresh workers to the ever-growing task that is DR. The students are staying in Jefferson City May 15-Aug. 15 and will be trained and certified in mud-out/ash-out, mass care (feeding), childcare and chainsaw recovery. They will travel with several dozen Missouri DR volunteers to provide childcare during the Southern Baptist Convention annual meeting next month in Baltimore and will be on call for any and all disasters Missouri DR responds to.  Already, they responded to the tornado recovery in Orrick (see story, page 9).

The third goal is to send them back out once the summer is over to help other students get plugged in to DR. Banderman led a group of Missouri college students to New York during Hurricane Sandy in the fall of 2012 and saw the success they had there. He said that experience leads him to have high hopes for this summer.

“This generation is going to serve,” Banderman said. “We can either watch them get involved with some other organization, or we can come alongside them and figure out how we can help them use that desire.”

“They’re ready and they’re excited for whatever wherever,” Banderman said.

Many DR volunteers are older retirees, simply because they are the ones that have the time available from work to complete longer callouts. Banderman said he hopes a project like this summer’s will tap into an unused manpower resource with lots of free time and bridge the gap between generations.

“I’ve heard nothing but excitement from the veteran DR workers,” he said.

Depending on the results this summer in the three pilot states, NAMB may expand the project in the coming years. In the meantime, Banderman noted that college students are welcome to become trained at any Missouri DR training event. The two remaining dates this year are: Sept. 5-6 at New Hope Baptist Church in Sedalia and Oct. 10-11 at First Baptist Church in Houston.