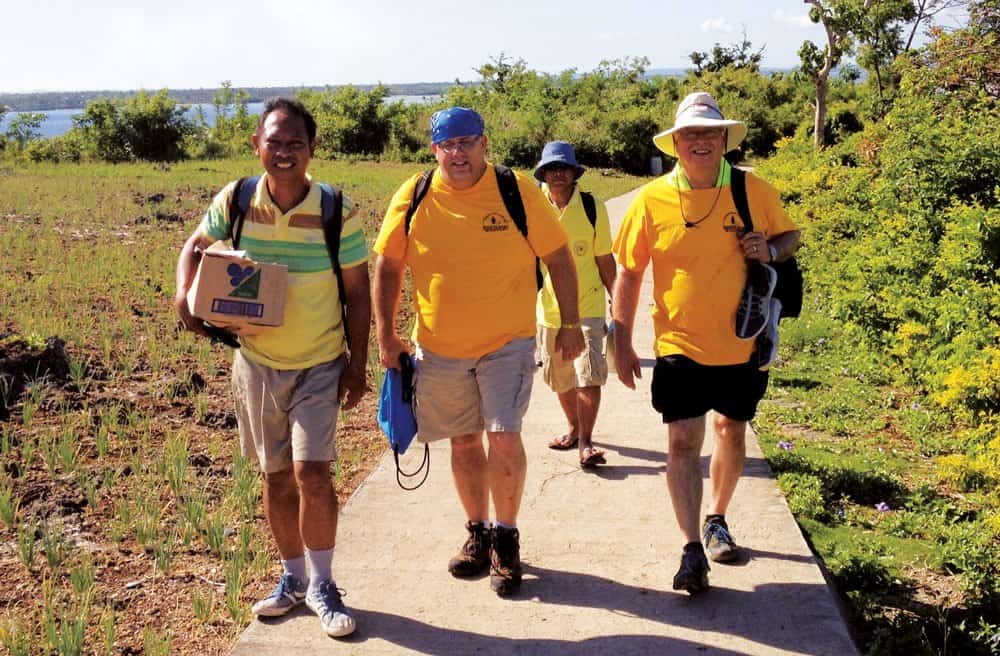 To Mayor Ricardo Ramirez of nearby Medellin, who oversees Gibitngil, Carter is a welcome sight and a Facebook friend.

To those on the island who have watched Carter lead four teams of disaster relief volunteers here since Typhoon Haiyan ravaged the central Philippines last November, he is the face of Missouri Baptists.

Tiny Gibitngil, only 2 kilometers long and 1 kilometer wide, was hit hard, and the island’s 2,000-plus residents had no place to take shelter other than Gibitngil Integrated School, located on high ground in the center of the island. Even so, the fierce storm collapsed one building’s walls and blew the roof or parts of roofs off three other buildings into the Visayan Sea.

Miraculously no one on the island was killed, and there was only one serious injury. When the winds calmed and the rains stopped, an assessment showed that every home on the island sustained damage.

Carter worked closely with Baptist Global Response (BGR) and the International Mission Board (IMB) to assess the damage and provide the island’s residents with food and water.  BGR, the IMB, and Missouri Baptist Disaster Relief all are supported through the Cooperative Program, with Disaster Relief receiving its greatest support through the Missouri Missions Offering.

Since that first trip, Carter has led three other teams of six to eight Missouri Baptists to rebuild or repair homes and to provide particular focus on rebuilding the school campus. And Mike Beasley of the Missouri Baptist DR leadership team has led two other teams.

This may be Carter’s last trip, and perhaps the last Missouri Baptist team to visit Gibitngil since life on the island is returning to normal. There is adequate food on the island. The school will be ready to welcome its 500 students when classes resume in June. And the BGR and IMB have an agriculturist and an indigenous missionary couple, Adore and Hope Sabido, coordinating further restoration efforts.

But the impression Carter and Missouri Baptists have left on this tiny island are profound – and eternal. Medellin’s Mayor Ramirez, for example, has told Carter that if it were not for Missouri Baptists, the island of Gibitngil may have been bypassed in favor of more densely populated or easier-to-reach locations.

Of greater importance is the testimony Missouri Baptists have provided, serving as the hands and feet of Jesus and leading many to faith in Christ.

One afternoon, as a team of six Missouri Baptists worked with local residents to restore the walls of Rosario Monato’s house, Carter felt led of God to stop work and lead a gospel presentation. Beneath the roof where four walls would soon be added, Carter invited his Filipino friends to place their trust in Christ. Several did.

As the 88-year-old Monato watched walls being erected on her storm-damaged home, she confided in Laura Wells, Missouri’s Woman’s Missionary Union (WMU) executive director, that she didn’t have any money.

“You don’t need money,” Wells assured her. “We are here because Jesus loves you, and we love you and want to help.”

“There are divine appointments awaiting us every day,” says Carter, who came aboard as MBC DR strategist nearly two years ago and helped broaden the vision of Missouri’s DR to include international opportunities.

Adore Sabido, one of the indigenous missionaries, described the Missouri Baptist teams as catalysts. “When the people on this island see the community development being done, they realize that these workers came from the United States to help,” he says. “That causes them see how they can be a part of helping one another.”

Indeed, many Filipinos on Gibitngil could be seen borrowing tools from the Missouri teams and working beside them to replace roofs, erect walls, and paint the school.

“We’re trying to build the kingdom of God as we work to rebuild the island, and the presence of Missouri Baptists here helps a great deal,” says Sabido.

Carter led five other Missouri Baptists on this trip: John Yeats, MBC executive director, and his wife Sharon; David Wells, pastor of Sandy Baptist Church in Hillsboro, and his wife Laura; and Rob Phillips, communications team leader for the MBC.

Four other state conventions have sent teams as well: California, Illinois, Louisiana and Georgia. But it’s the MBC that formally adopted the island and has taken the lead in recovery efforts.

“Many religious organizations have come to help,” says Sabido. “What the people on Gibitngil tell me is this: There is something different about these people (Southern Baptists). The others try to get us to join their church. The friends of Pastor Dwain tell us about Jesus.”

On what likely was Carter’s last day on the island, after he sealed his good-byes with tender hugs, he stood on the beach where the low tide created warm tidal pools, and looked misty-eyed toward the cliffs as they gave way to newly planted crops and surviving coconut palms.

“If we accomplished one thing,” says Carter, “it’s that we let these precious people know that they do not walk alone.”