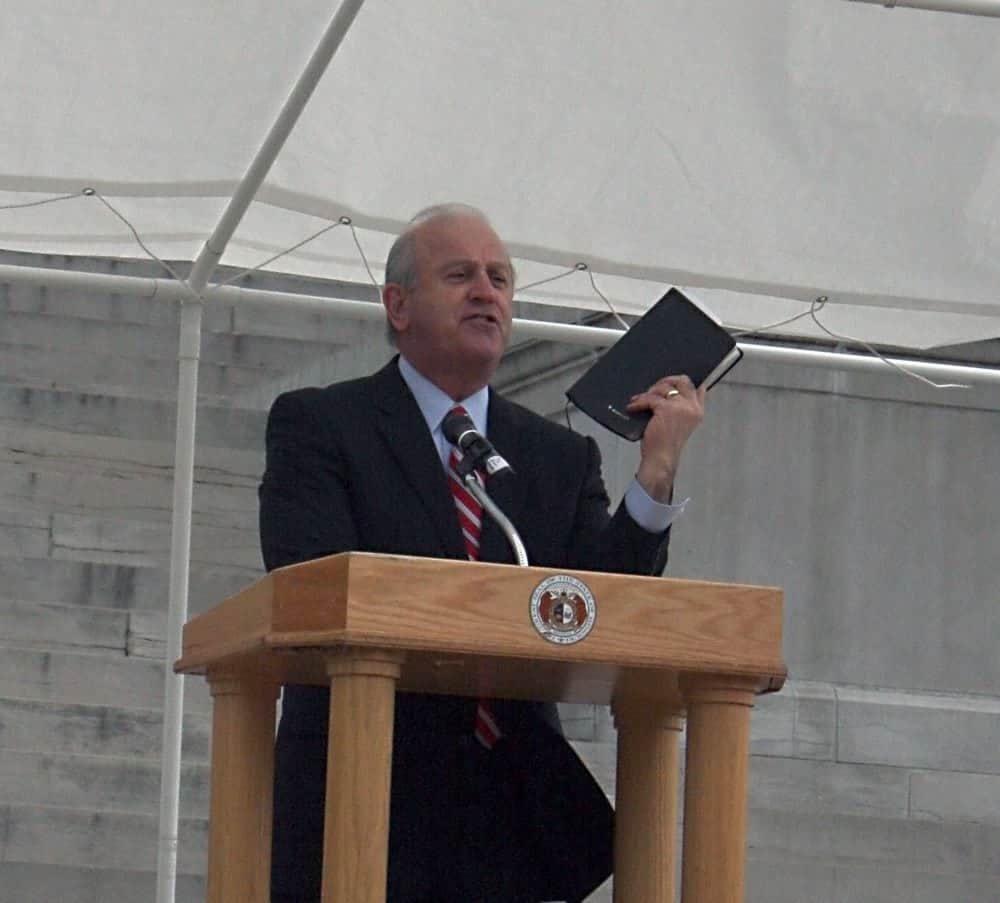 JEFFERSON CITY – Saying the time has come for Christians to stand up and be counted, Mark Snowden brought a message from Daniel 3 to the steps of the State Capitol as one of many National Day of Prayer events across Missouri May 1.

Snowden, evangelism/discipleship strategist for the Missouri Baptist Convention and an expert in “Bible storying,” told the small crowd that braved the rainy, windy weather the familiar account of Shadrach, Meshach, and Abednego. It’s been retold many times, but Snowden said it bears repeating:

2,500 years ago in Babylon, King Nebuchadnezzar made a gold statue, 90 feet high and nine feet wide. The king sent word to all the rulers of the provinces to attend the dedication of the statue and worship it when the music began to play. But three Jews were there – Shadrach, Meshach and Abednego – who refused to bow down. The king said he would throw them into the fiery furnace if they refused to bow down and worship. But still they refused, saying “If the God we serve exists, then He can rescue us from the furnace of blazing fire, and He can rescue us from the power of you, the king. But even if He does not rescue us, we want you as king to know that we will not serve your gods or worship the gold statue you set up.”

They of course were thrown into the fire, but were not killed. When the king looked into the furnace, he saw four men walking freely, and one looked like the “son of the gods.”

He called Shadrach, Meshach and Abednego from the fire. They were not burnt nor did they even smell of smoke. When the king saw this, he said “Praise to the God of Shadrach, Meshach, and Abednego! He sent His angel and rescued His servants who trusted in Him. They violated the king’s command and risked their lives rather than serve or worship any god except their own God. Therefore I issue a decree that anyone of any people, nation, or language who says anything offensive against the God of Shadrach, Meshach, and Abednego will be torn limb from limb and his house made a garbage dump. For there is no other god who is able to deliver like this.”

It’s a story heard in Vacation Bible School and Sunday School, but the biblical account of faith in the face of persecution is very applicable to Christians in Missouri and the United States today, Snowden said.

“I don’t know where we’re headed in this culture, but it’s not good,” he said. “What happens if God’s laws and man’s laws contradict? Are you fire-worthy? Are you ready to disobey the law of the land regardless of consequences? If you really do believe in the authority of God’s Word and if you’re really making decisions based on what God says and no one else, will you be willing to take a stand?”

The results may not be easy, Snowden said, but they are God-honoring, and they can result in God’s favor, such as Nebuchadnezzar’s turnaround.

Snowden said there are two keys to standing up and facing the fire. Prayer and humbling ourselves:

“This National Day of Prayer is not just ‘holy talk,’” he said. “It’s an opportunity to talk to the Lord and pour out our heart to Him for our state and nation. When you gather and lift up your prayers to Him, you’re engaging in ministry.

“The Bible says that if we humble ourselves and pray, God will hear from Heaven, forgive our sins and heal our land. But we forget about humbling ourselves and repenting.”