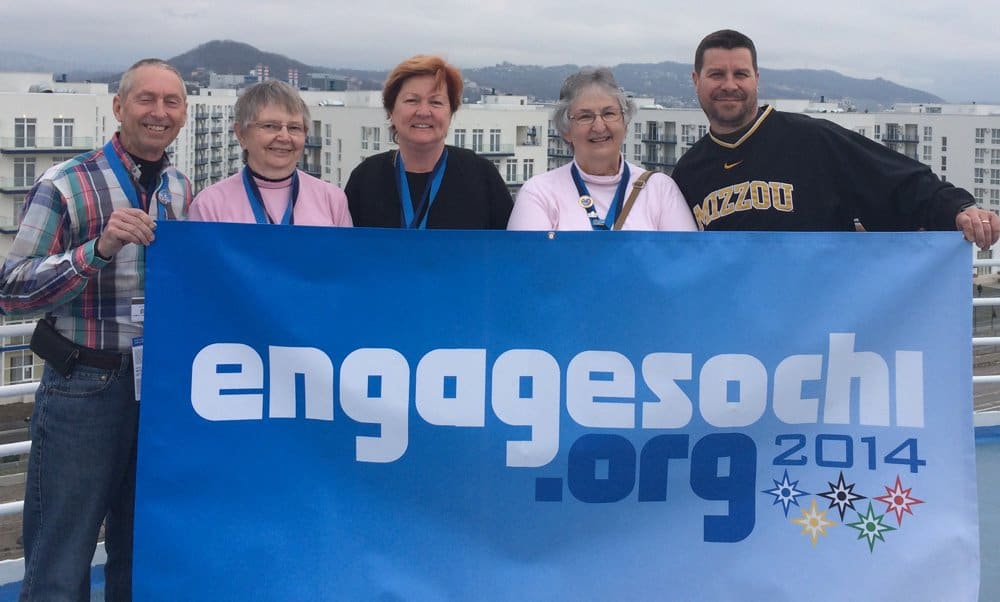 SOCHI, Russia – George Hawkins began preparing for the Olympics in 2011. He wasn’t training to compete; he was getting ready to share the gospel.

When the world came together in Sochi, Russia, Hawkins and other Missouri Baptists carried the Good News to the nations.

“It was thoroughly enjoyable, and we were getting the Word out,” said Hawkins, who lives in St. Joseph.

A team of five individuals from St. Joseph – members of Strong Tower Baptist and McCarthy Baptist, were joined by a family of six from Colorado Springs on the mission trip, Feb. 4-14. About 200 short-term missionaries served during the Olympics.

Hawkins feels a strong pull to minister to Eastern Europe and the Russian people. He has taken numerous mission trips to the region and maintained a friendship with a couple who used to live in St. Joseph who now serve as International Mission Board missionaries in Sochi. Only about 1 percent of the population knows Christ, and evangelism is a slow and deliberate process.

“That’s why we keep going,” Hawkins said. “We know it takes multiple encounters, and those encounters can’t happen unless we go.”

During the Olympics, the team distributed trading pins and gospel tracts with the theme “Engage Sochi.” The tracts, printed in both English and Russian, used the colors of the Olympic rings to share the message of salvation.

Most of the Olympic events took place at night, creating sharing opportunities.

“You’ve got all day with all these people and lots of time to engage them in conversation,” Hawkins said.

The trains proved another good venue.

“Day after day, there were lots of available seats and we’d look for seats by a single person or couple and engage them in conversation,” he said. “We’d engage them in small talk and get a trading pin in their hand. When time permitted, we’d go over the literature with them.”

Though they talked to people from around the world, the majority were from Russia, although not necessarily the city of Sochi. Volunteers, many of whom spoke English, were stationed throughout the city to give directions and information.

The team stayed on a cruise ship – temporary lodgings brought into the harbor. They had to register for spectator passes to be able to enter the venues.

“Security was unbelievable. It was very tight, very strict and much more thorough than you’d find going through an airport,” Hawkins said. “The strange thing was I felt like I was in the safest place on earth.”

John Christensen, also a member of Strong Tower, took an American flag with him. The flag became a magnet for people who wanted their picture taken. They also received a pin and gospel tract.

The Olympics opened a door to carry the Word of God to people who might never hear it otherwise. Hawkins feels a sense of urgency to reach Eastern Europe.

“We have an open door right now,” he said. “With things the way they are politically in the world, that could slap shut at any time. We’ve got a lot of work to do.”

Whenever possible, the teams collected contact information, and missionaries in the field are following up with those who were reached during the Olympics.