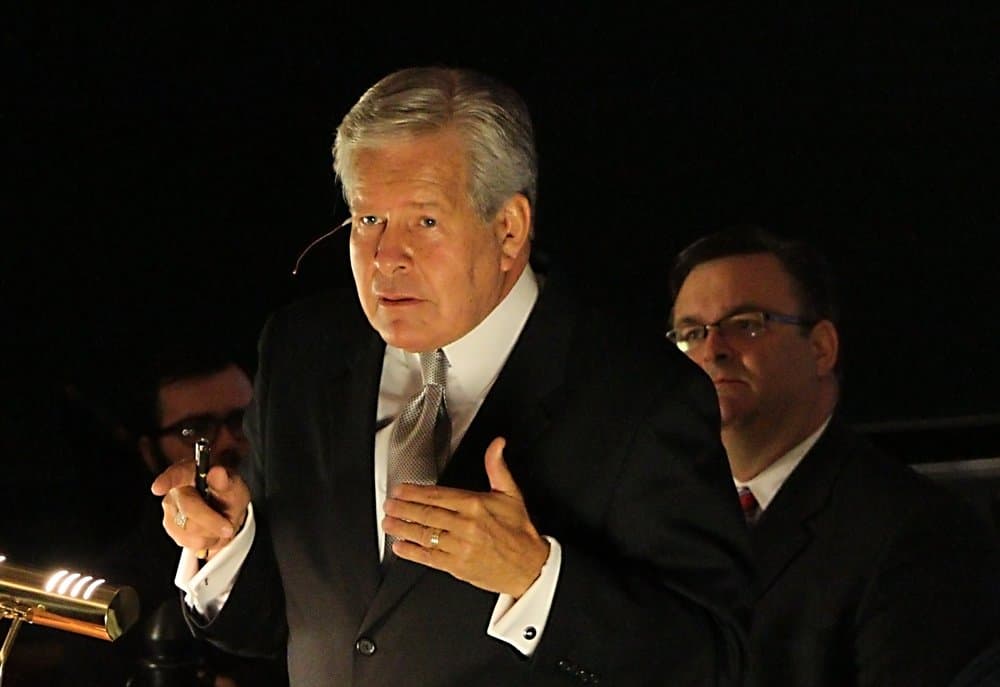 HANNIBAL – Bob McEwen told those at the Worldview Conference at Hannibal-LaGrange University, April 3, how economics in politics works and how it should work. The former U.S. Congressman from Ohio gave a historical perspective of God’s role in politics.

In a two-part speech, McEwen said there are three power sources – economics, politics/military, and spiritual.

While many today squelch Christianity, McEwen proclaimed that “America is what it is because of its spirituality.”

To illustrate this, he said Americans have won half of the Nobel Peace Prizes, but half of those were not U.S.-born.

“They didn’t get those because they were smarter, but because they were free,” McEwen said. When government restricts people’s choices, it deprives them of freedom. When people have fewer choices, they will also have a lower standard of living.

Using a chart, McEwen also showed that when someone buys something for themselves, they want the best quality product for the best possible price. When a person buys something with someone else’s money, they consider quality rather than price. And when they buy something with their own money for someone else, they look for the best price and sacrifice quality. But when a third party purchases a product – without using their own money and with no plans to use the product – they sacrifice both quality and price.

“There are two ways to get money from someone: Free enterprise – two parties make an exchange and both are better off,” McEwen said. “The second way is coercion. Government has nothing it doesn’t take from someone else.”

“America is wealthy, so they can bless other people,” McEwen said. “Socialism creates poverty.”

McEwen showed how God factored in the American Revolutionary theme of “life, liberty, and the pursuit of happiness.” He warned of godless government: “If they won’t protect your life, they aren’t going to protect your liberty. Man, without God, always ends up killing.”

He said there are only two worldviews: Man created God, or God created man. In the first, man is the standard, is good, his environment is responsible for behavior, and groups seek rights. Where God is called creator, God is the standard, man needs a savior, individuals are responsible for their own behavior, and God is the source of human rights. ν