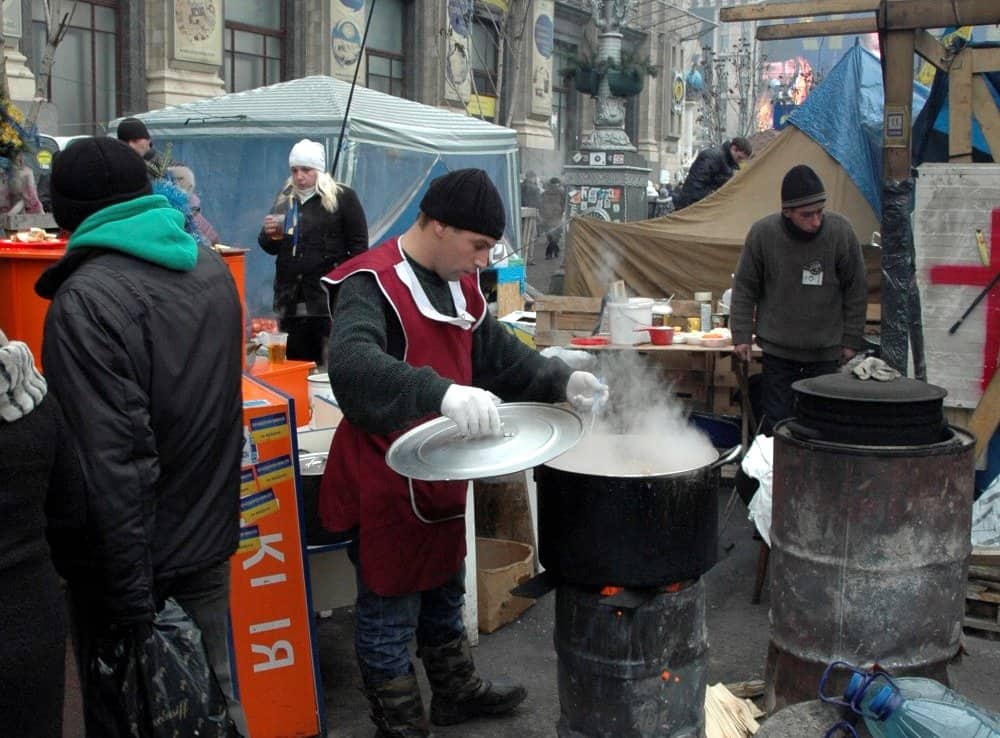 LVIV, Ukraine – Although he was born under the shadow of the Soviet regime, 36-year-old Baptist seminary President Yaroslav “Slavik” Pyzh never imagined that he would now face what, according to some news agencies, could become “the worst East-West crisis since the Cold War.”

With support from Missouri Baptist churches, Pyzh and his students at the Ukrainian Baptist Theological Seminary labor to spread the hope of the gospel throughout Ukraine as Russia amasses and shuffles its troops along the nation’s border.

“I never thought I would be praying, asking God to keep us safe and keep war away from us,” Pyzh said. Indeed he has prayed that war would cease, but until now his prayers have focused on wars in Afghanistan or in some other distant nation. “But this is my home, and the war is here.”

Located in western Ukraine, near the nation’s border with Poland, the Ukrainian Baptist Theological Seminary is relatively sheltered from the latest violence and political struggles, which have broiled in Eastern Ukraine and Crimea ever since antigovernment protests broke out late last year. Nevertheless, Pyzh said, students and faculty members at the seminary have felt the impact of these events.

“A couple of our students are in military service right now because of it. So they couldn’t attend to their studies,” Pyzh said. “Something that is much more difficult is that people don’t really know what is going to happen tomorrow. … It gives you a little different perspective on things, that you don’t really have a lot of time, so you better use whatever time you have left.

“If Russia will come here, we are going to lose our freedom, and I don’t think we will be able to do the things that we are doing right now. At least, in Russia, their freedom is quite limited. For that reason, we are trying to impact people and society as much as we can.”

Currently, the seminary is equipping and mobilizing students to plant churches throughout the nation. It is also establishing an international missions program, which will send students throughout Eastern Europe to proclaim the gospel and plant churches.

According to Joe Privott, member at First Baptist Church, Ellisville, and an adjunct professor at the seminary, Pyzh and fellow Baptists in Ukraine are turning their gaze outward to reach a lost nation and world.

“Historically, the churches in Ukraine had a persecuted church mentality and were inward looking. But everything we do at this seminary is missionally focused,” said Privott, who founded the Ukraine Partnership Foundation (www.upfmissions.org) after he went on a mission trip to Ukraine in 2006. The foundation seeks to support Ukrainian Baptist Theological Seminary as it raises up indigenous leaders within the nation’s Baptist community. Privott later helped Pyzh move to Fort Worth, Texas, to train for his presidential task at Southwestern Baptist Theological Seminary, where he earned his Ph.D. in 2012.

“What we are trying to do is to raise up people who will be disciple-making disciples and to plant churches that will be self-reproducing,” Privott added. Currently, 10 students from the Ukrainian seminary are planting churches throughout the nation. Five Missouri Baptist churches have partnered with these students, including First Baptist, Jefferson City; First Baptist, California; Lebanon Baptist, McGirk; Parkade Baptist, Columbia; and First Baptist, Dexter. Pyzh said that one student is still seeking a partner church from the United States.

The Ukrainian seminary is also developing a women’s ministry program. Traveling to Lviv in March, Dorothy Patterson – wife of Southwestern Seminary President Paige Patterson and a Southern Baptist advocate for women’s ministry – noted the difficulty that current events could bring to women in the nation.

“They are facing some real challenges,” Patterson said in a March 31 news release. “Because of the threat to the nation, almost every woman in that country is going to have a brother, a husband, a father, or a son in the military – they’re all going to be affected by this, and that’s a huge burden. This is a very difficult time in the lives of our brothers and sisters in that Eastern European region.”

Despite the difficulties that lay ahead, Pyzh said that the threat of war looming over Ukraine has opened doors for evangelism. Baptists in Ukraine are trying to help their neighbors amid the present crisis, he said, and “that makes the church’s message much more valuable to them.”

“When you have these times of uncertainty, people are searching for something that they can put their trust or hope in,” Pyzh said. “And for that reason, I think they’re much more open to the gospel right now.” ν