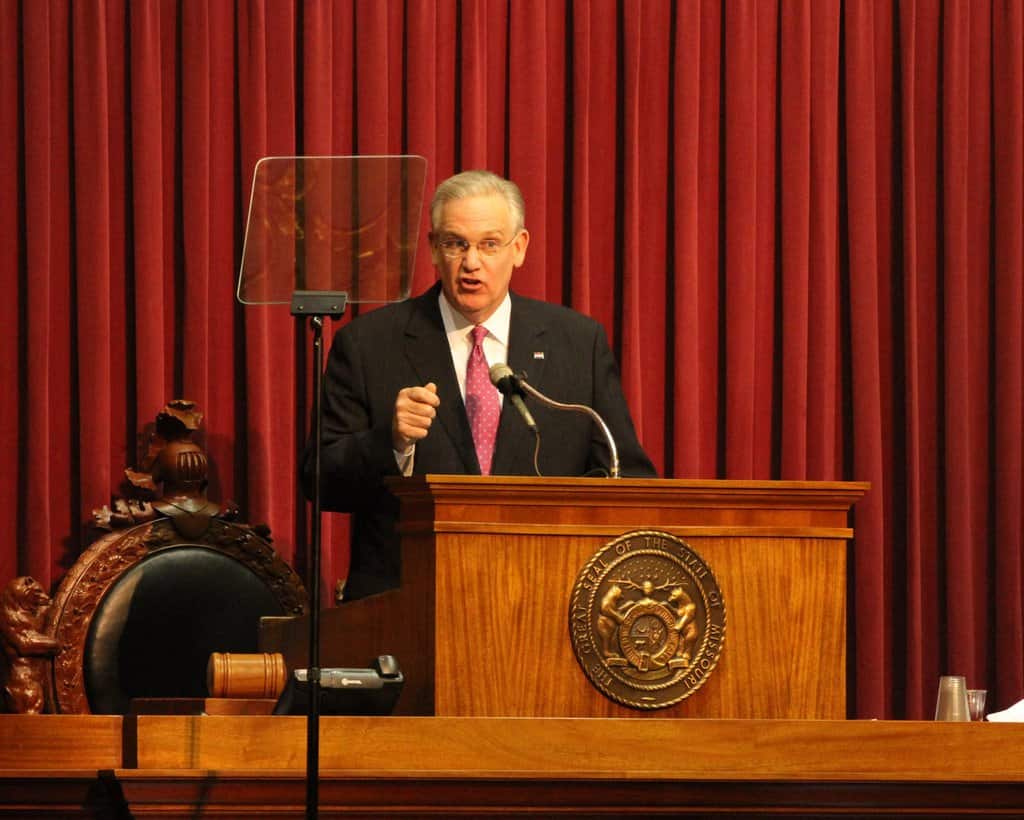 JEFFERSON CITY, Mo. (AP) —   The attorney for four taxpayer plaintiffs told a circuit judge that every citizen of Missouri is harmed when a governor can use an executive order to create new tax breaks for his political supporters.

The argument was made during an hour-long hearing in Cole County on April 3 before Judge Jon Beetem, in which plaintiffs were seeking a temporary restraining order (TRO) against an executive order by Governor Jay Nixon regarding the filing of combined tax returns by same sex couples wed in other states.

Judge Beetem denied the TRO request on April 5, but set an early status conference for May 2 to schedule remaining proceedings in the case.   The judge specifically noted in his ruling that by denying the TRO he was not taking a position on whether the legal challenge is likely to succeed.

Mike Whitehead, attorney for four plaintiffs, pro-family leaders in the State, filed a motion on March 25, asking the court to temporarily enjoin the implementation of the policy, pending the final resolution of the case.   After the judge declined, Whitehead said: “The TRO motion was the first step in the process to get to a trial on a permanent injunction.  We move now to the steps regarding a preliminary or a permanent injunction.   We are glad  the judge set a May 2 date to schedule these next steps as soon as possible.  It is the final judgment that is important.”

Solicitor General James Layton argued for the State of Missouri against the motion for TRO.  Also opposing the motion was ACLU lawyer Anthony Rothert, St. Louis, on behalf of a same-sex couple from St. Louis who were allowed to intervene in the case on the side of the Governor.  The defendant-intervenors said they had been married in Iowa and would be affected financially by the Court’s ruling.  They also noted that they may wish to challenge Missouri’s Marriage Amendment as violating the U.S. Constitution on equal protection grounds.   The Solicitor General said the Attorney General’s Office will not be making that argument.  Judge Beetem allowed Ed Reggi and Scott Emanuel, to intervene as defendants, and allowed Mr. Rothert to argue at the hearing.

Whitehead proposed a court order that would  have restrained “Soliciting, inviting, accepting, permitting or requiring the filing of a combined State Income Tax Return by anyone known to be other than a married individual as defined by Article 1, § 33, and by R.S. Mo. §451.022.”   “PROVIDED, this Order shall not require the Department of Revenue to reject, return or take further action regarding the combined returns, if any, already filed by calendar year taxpayers for 2013, or which are duly filed on or before  April 15, 2014, at 12:00 midnight.”

Whitehead said the plaintiffs were not seeking to affect the tax filing process during the current tax season and that the denial of the TRO does not change their legal position.

“There is nothing on the forms, nothing in the law that requires someone to submit information that would allow the director of revenue to look at a return and say, `Oh, that person is not married as recognized under Missouri law – whether it’s because they are of the same gender or some other reason,” Layton said.

“Mr. Layton knows of at least one couple – Mr. Rothert’s clients,” Whitehead responded.  “The ACLU has also filed a separate lawsuit in Kansas City on behalf of eight same sex couples – so now we are up to nine combined returns.”

The motion for a “TRO” was the first  step in the legal process which started in January this year when the four plaintiffs filed a lawsuit naming the governor and his director of revenue, challenging the Executive Order 13-14, which Gov. Nixon issued November 14, 2013. The order directs the Director of Revenue to require Missouri combined returns from same sex couples who were married in a state recognizing same sex marriage, and who filed a federal joint return.

Whitehead made a statement after the hearing:

“My clients’ objective is not to require anyone to pay more taxes or file more paperwork than they did before. Their objective is to require state officials to obey the state constitution and the laws.

“Even the Windsor case affirmed that the definition and regulation of marriage has been regarded as a virtually exclusive province of the States from the Nation’s beginning. (133 S. Ct. 2680) The People of this State have reserved this power to themselves, and it cannot be taken from them by executive orders of governors or presidents.”

Don Hinkle, MBC director of public policy and editor of the MBC’s newsjournal, The Pathway https://mbcpathway.com/.

Kerry Messer from Festus, Mo., legislative liaison for the CLC in the Missouri Legislature. He also founded a pro-family organization based in Jefferson City, Mo., called Missouri Family Network.

Joe Ortwerth, executive director of the Missouri Family Policy Council, one of more than 30 such state organizations formally associated with Focus on the Family, the family support ministry founded by Dr. James Dobson.