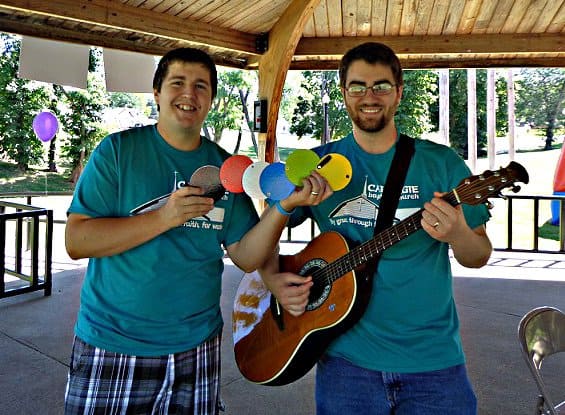 ST. JOSEPH – A trailer load of Bibles arrived in St. Joseph last spring. Then the strategy began of how to get the Word into people’s hands.

The St. Joseph Baptist Association served as a pilot in 2013 for Light Up Missouri – a servant-evangelism initiative of the Missouri Baptist Convention (MBC) that encourages churches to distribute one million Bibles over the next two years.

The impact has already been noticed among St. Joseph churches who accepted the challenge of Clyde Elder, Director of Missions, to give out the New Testaments.

“We’re big believers that if we can get the Word of God into a person’s heart, transformation occurs,” said Jacob McMillian, pastor of Carnegie Baptist Church.

Carnegie was one of three churches in St. Joseph’s South Side who joined together to saturate their neighborhood. They prepared brochures with information about each of the three churches to be given away with Bibles.

Carnegie has a Sunday night visitation program in which teams go door-to-door, and last summer they began giving out the “Find It Here” Bibles during this visitation. Then one Sunday, a man walked into services carrying the book with him.

“It was cool to know that through us bringing the packet, it encouraged him to check it out,” McMillian said.

Faith United Baptist Church has developed creative ways to distribute Bibles. The youth even handed them out during a parade. There was some question if it would be effective or if people would just throw them away. But during the parade, people eagerly accepted the Bibles and even ran up to ask for more.

“Whenever we have a chance to go out, we take the Bibles out with us,” said James Kerns, associate pastor at Faith United. “We’re eager to get rid of them because we want to get the Word out in St. Joe and the area.”

Members of all ages have become engaged in distributing the New Testaments. Kerns said they’ve handed them to teens attending the “Crave Cafe” outreach, to grieving families at funeral services, in Christmas food baskets, to parents at the RA Derby night. Girls in Action take them on nursing home visits.

McMillian said Light Up Missouri has been a catalyst to enable them to effectively reach their neighborhood for Christ. The church has focused on the families who live in close proximity to their doors. This summer, they hosted a one-day VBS at a park, and in the fall, they gave out Bibles along with candy at the “Trunk or Treat.”

“The greatest choice we made was to go back door-to-door and go back to the neighborhood,” he said.

The St. Joseph Association has given away most of the Bibles they received last year. Elder said the program has been wonderful for churches, indicating exciting things as the initiative takes off statewide this year–with many churches launching their efforts around Easter.

At Faith United, members are reminded every service to take a Bible and give it to someone.

“It’s better in the hands of someone who needs it than sitting on a table not being read,” Kerns said. “We’re doing what God says to do and that’s to share His word.”