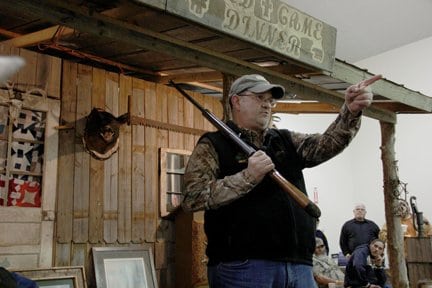 LOUISVILLE, Ky. (BP) – An evangelism strategy that involves giving away guns to attract unchurched men to wild game dinners has drawn criticism from gun control advocates in an array of national media outlets this month, including TIME, USA Today, MSNBC, Fox News and the Huffington Post.

But Kentucky Baptist Convention (KBC) leaders say God is using KBC’s controversial ministry effort and the flurry of media attention to increase attendance and salvation decisions at the events. Sixty-eight people professed faith in Christ at a wild game dinner last weekend, and nearly 500 attendees have done so in Kentucky churches since Jan. 1.

“The recent reports regarding the giving away of guns at wild game dinners have, by and large, missed the essence of the story,” KBC Evangelism and Church Planting Team Leader Chuck McAlister told Baptist Press in written comments.

“There is a basic misunderstanding of evangelism and what compels us to share the gospel of Jesus Christ with others. … The offense that many have regarding the guns themselves also causes the greater story to be ignored.”

The wild game dinners, which some churches refer to as “Second Amendment Celebrations,” feature a free meal and a message from McAlister about the outdoors, hunting and how to know the God who created nature through His Son Jesus.

The number of unchurched men in attendance is directly proportional to the number of firearms given away, said McAlister, former host of the Outdoor Channel’s “Adventure Bound Outdoors.”

The Second Amendment Celebrations are part of the KBC’s larger “affinity evangelism” strategy, a method of sharing Jesus by bringing people together based on common needs or interests – including hunting, quilting, archery and dozens of other possibilities.

Local businesses and individuals donate guns to be given away during the events as door prizes. Gun winners are photographed with their prizes but can only claim them at local gun dealers after passing background checks.

McAlister told the Louisville Courier-Journal that he does not “advocate violence” and that the guns are intended “for hunting and protection only.” But that hasn’t silenced critics.

“Most churches would be appalled. It is an appalling form of outreach of evangelicalism that is an offense to the gospel of Jesus,” Nancy Jo Kemper, pastor of New Union Christian Church in Lexington, Ky., told MSNBC. She said “Jesus would puke” in response to Kentucky laws that allow clergy and laypeople to carry concealed weapons on church property.

Joe Phelps, pastor of Louisville’s Highland Baptist Church, which separated from the KBC in 2012 after the congregation ordained an open homosexual, told the Courier-Journal that it is inconsistent to give away guns at an event where people hear a message about Jesus, who said, “Put away the sword.” Phelps went on to take issue with all “giveaways for God.”

“Can you picture Jesus giving away guns, or toasters or raffle tickets?” Phelps said. “…. He gave away bread once, but that was as a sign, not a sales pitch.”

McAlister has participated in outreach events featuring gun giveaways for more than 20 years, he said, but “only recently have these events been called into question.”

“This is largely due to the explosion of violence that we are seeing in our nation, particularly on our school campuses,” McAlister said. “Many in our culture would point to guns and access to guns as the culprit in this escalating violence. They have chosen to view guns as something evil. Anyone who dares associate with a gun is therefore doing something terribly wrong in their minds. However, the people to whom we target our gospel message do not share this mindset. They see guns as a part of their everyday life.”

Giving gifts to draw people to Jesus follows the example of God Himself, who gives creation, conscience and the cross in attempt to woo sinners, McAlister said.

“While gun control advocates may bristle at the approach, personally, I find nothing about these events to be sinful,” Chitwood said. “To the contrary, at events like these in Kentucky and beyond, Southern Baptists are seeing thousands of people won to Christ each year.”

Although the KBC did not attempt to incite the recent blitz of media coverage surrounding Second Amendment Celebrations, the convention welcomes the opportunity for evangelism.

“During this brief time in the media spotlight, I have seen Chuck McAlister have opportunities to share the gospel with more reporters and talk show hosts than we would have ever imagined,” Chitwood said. “While we have not sought this attention, we are praying that God will find us good stewards of it.”