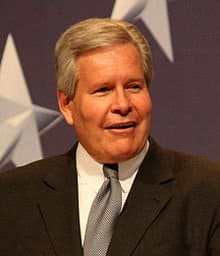 HANNIBAL – As a business student at the University of Miami in the early 1970s, Bob McEwen noticed how American ideals, founded upon biblical principles, have made cities, states and nations flourish.

“I observed as a youngster that America had abundance, that other countries were living in poverty and that, where you apply the American ideals, you have abundance,” McEwen said. In years to come, he witnessed the impact of these ideals first-hand while serving as a business executive, as a representative in the Ohio legislature, and as United States Congressman for six consecutive terms from 1981-1993.

As a U.S. Congressman, McEwen participated as an official observer of Poland’s first parliamentary election in 1989, shortly before the fall of the Berlin Wall and the collapse of the Soviet Union. He also served with U.S. delegations in Europe and hosted a conference to foster reconciliation among Balkan nations. He once drafted legislation that, according to General Norman Schwarzkopf, helped lead to the success of Operation Desert Storm. Also, his colleagues elected him to serve for a time on the House of Representative’s Select Committee on Intelligence, which oversees such agencies as the CIA and FBI.

“The United States has been the lighthouse for the gospel throughout its history,” McEwen said. “85 cents out of every dollar that goes for the cost of global evangelism comes from this four percent of the world’s population, the United States of America. It is seen as the standard for righteousness. … The United States is seen as standing for what is right.

“I’m going to explain (at the Worldview Conference) the political roots of America, such that a person can understand why, when they live in Arizona, they live in abundance but, when they cross El Rio Grande, the water deteriorates, the communication system diminishes and the standard of living collapses. What is the reason for that? Why is it that North Korea has starvation and South Korea has the tenth largest economy in the world? … Detroit was the richest city in the world 40 years ago. It is now the poorest city in the Northern hemisphere. Our political decisions will determine the amount of poverty and disease that plague people.”

The Founding Fathers, McEwen said, established the United States on godly truths that ultimately derive from Scripture – truths that have allowed America to grow and flourish. But today even pastors are hesitant to apply biblical truth to politics.

“There has been a desire to exclude God from American culture from the beginning,” he said, “but the pulpits have always stood for righteousness and have prevented that from happening. We’re now experiencing for the first time in history the pulpits abandoning the field to those who would separate America from God.”

“And that is of vital concern to me because there are three sources of power” – political, economic and spiritual sources, McEwen said. “Wall Street cannot save America, and politicians cannot save America. If the pulpits of America do not engage America as a force for righteousness, the nation will not be saved.”

Other featured speakers at the conference include Joshua Hawley, associate professor of law at the University of Missouri law school and one of the attorneys who are representing Hobby Lobby in its case against Obamacare before the U.S. Supreme Court March 25, and Janice Crouse, senior fellow at the Beverly LaHaye Institute with Concerned Women for America.

The conference will be held in the Roland Arts Center’s Parker Theater. Doors open at 7:30 a.m. Lunch will be served in the theater’s lobby at noon at a cost of $8.95 a person. The conference ends at 4:30 p.m.

To learn more about the Worldview Conference, or to register online, visit mobaptist.org/worldview.