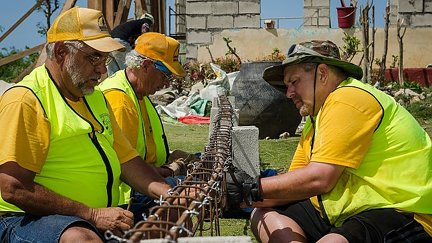 Much of the press and publicity have moved on, but Baptist Global Response (BGR) continues relief efforts.

“Baptist Global Response is gearing up for long-term development as the short-term relief organizations pull out,” says International Mission Board missionary Stan Smith. He and his wife, Dottie, minister on the island of Cebu.

“There is much work to do as we survey areas farther from town who have been neglected but desperately need help as they try to rebuild their lives,” Stan explains.

Work on Cebu has centered on Gibitngil, a small island of more than 2,000 people.

In January and February, BGR teams from Missouri, Illinois, Louisiana and Georgia repaired and rebuilt Gibitngil’s school that accommodates 500 children.

“[These teams] have become island celebrities as they brought in tools and a generator to work with the grateful island villagers who are amazed that these followers of the Lord Jesus would come so far to serve them,” Stan says.

The islanders are also actively involved in the rebuilding effort, Dottie says.

“When they unload any materials off of a boat, be it bags of cement or lumber or whatever, someone, including little kids, grab the cargo and hike up the hill to the schoolhouse,” she says. “It definitely is a community effort.”

Several of the classrooms are now in use and re-roofed. “We are providing volunteers and materials, but the community is also providing their own national volunteers,” Dottie adds.

Volunteers visit with the teachers over lunch and have built strong relationships. “[It’s] such a wonderful opportunity to explain a relationship with Jesus as they are touched by these teams’ willingness to cross the ocean at their own expense to serve them,” says the International Mission Board missionary.

“Their coming here is not only repairing the school in Gibitngil island, but they are starting to repair lives of the people,” Sabido says. “It is opening the way for the gospel to come to the island.”

Sabido said a year of ministry on the island has resulted in 32 people being baptized. But relief work on the island has been discouraging at times, he says. Bad weather and the wrong type of supplies have caused setbacks.

“This is not our work, this is God’s work,” Sabido says. The openness of the people on Gibitngil has at times overshadowed the discouraging moments.

Food distribution on the island finished in mid-February.

“People are at the point where they can survive food-wise,” says Susan Stokeld, BGR project director in the Philippines.

“We are moving into the final stages of recovery and then we are hoping to move into a full-fledged community development project,” she explains.

Stokeld says the principal of the school has given permission for BGR workers to set up a plant nursery.

An agriculturalist visited Gibitngil to investigate ways the volcanic rock in the area could be used to help them become more self-sufficient. Most of the island’s food and water comes from the main island of Cebu.

The South Carolina and Georgia Baptist conventions adopted relief and reconstruction work in northern Cebu. When a state convention adopts an area, they take responsibility for relief work in the area.

Stokeld says three Filipino staff members are coordinating relief efforts in the city of Pilar on the Camotes islands. The city was hit hard by the typhoon and many communities off of the main road were overlooked by relief organizations.

“Pray that people are seeing a difference in our lives and our reason for being there.”

The California Baptist State Convention adopted the city of Ormoc, on the island of Leyte, and committed to help rebuild six schools over the next six months.

IMB missionary Jill Harvell said BGR funds have been used to provide 1,000 families in Ormoc with food and housing materials.

The Arkansas Baptist Convention is assisting with the rebuilding of the Southern Baptist Camp in the neighboring city of Javier.

“What a privilege it has been to be the hands and feet of Jesus to those,” Harvell says. “I am thankful to the Baptist Global Response organization that has enabled me to utilize my gifts of organization and helps. I am so full of joy.”

“We have prayed for these central islands for years as the work is hard and slow among people who have zeal without knowledge,” Stan says. “Could it be that God is going to bring the light of the Truth through such great disasters? Only He could do that.” (*Names changed.)